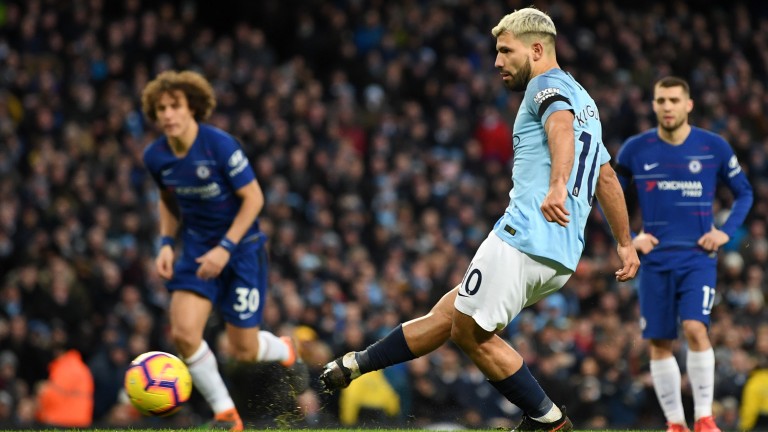 The quadruple remains an impossible dream for Manchester City according to boss Pep Guardiola even though the clean sweep is being offered at single-figure odds by some bookmakers, but City can get the first leg on the board by beating Chelsea in the Carabao Cup final at Wembley.

City laid down a stern marker for this game with a crushing 6-0 Premier League victory over a dispirited Chelsea at the Etihad earlier this month, leading to a major change in the odds for a revenge mission at the national stadium.

The price for a City win is around the same as it was when they went off for the league encounter when home advantage was a factor for the Premier League champions, although the victory was so emphatic it would take a brave soul to oppose the rock-solid favourites as they go in search of a 14th win in 15 matches.

Sergio Aguero was the man who destroyed Chelsea, scoring a hat-trick, and it could have been even better for the Argentinian, who also missed an open goal.

Aguero loves his clashes with Chelsea - the former Atletico Madrid man has 15 goals against them in 18 appearances - and he can do the business again by starting City on the road to success.

Playing up front for City, behind a plethora of creative talents such as Raheem Sterling, Leroy Sane, Bernardo Silva, David Silva, Ilkay Gundogan and Kevin De Bruyne, must be a wonderful joy so it's little wonder Aguero heads to Wembley with 17 goals to his name in the Premier League this season.

That kind of offensive power has helped City to score the first goal in each of their last 18 outings, a run which includes successive first-minute goals for Aguero against Newcastle and Arsenal.

In total Aguero has 11 goals in ten appearances in 2019 and five of those were the opener, while he nearly always turns up in the big matches.

This year alone super Sergio has struck hat-tricks against Arsenal and Chelsea as well as a critical goal in the title race against Liverpool - and that's without mentioning the "Aguerooooooo!" goal that won City the Premier League in 2012.

Aguero opened the scoring in last season's League Cup final against Arsenal and was crucially missing when City lost 2-0 at Stamford Bridge in December.

Chelsea will be hoping they can contain City again and then look to nick something, although even Maurizio Sarri admitted his side were "lucky" to win that league game, scoring with their first proper foray into enemy territory.

Sarri's side have suffered plenty since then to such an extent that many are predicting the manager will be for the chop if things go wonky at Wembley.

Chelsea have lost to Tottenham, Arsenal, City and Manchester United already in 2019 and in those losses the aggregate half-time deficit was 9-0.

They simply cannot afford to be as slow out of the blocks again. Sarri's side need to be disciplined, committed and then hope for Eden Hazard or Gonzalo Higuain to strike when City have one of their dozy defensive slips.

All of which is possible but there has been precious little evidence of Chelsea showing enough fight and centre-back Antonio Rudiger has admitted Sarri's training sessions are like being back at school.

Unfortunately for the Blues boss he could get another lesson from Guardiola, who has won four of their five meetings and the sixth duel could be the sweetest of the lot.