League Cup final debate: who will win at Wembley on February 24? 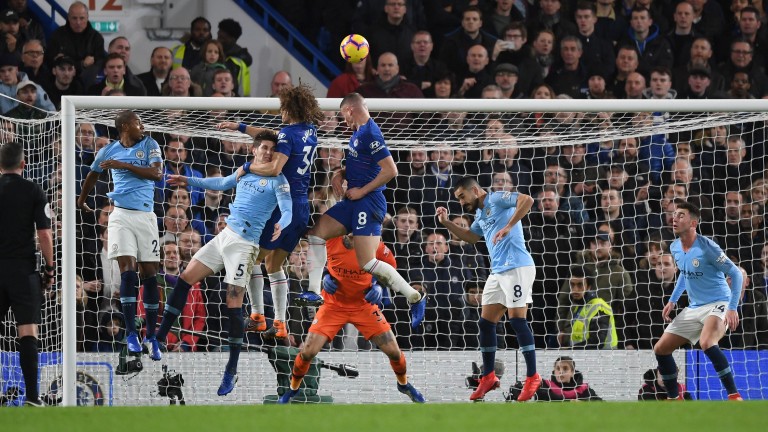 Manchester City are odds-on favourites to beat Chelsea in the Carabao Cup final on February 24. We have asked Racing Post's football experts who they believe will come out on top at Wembley.

Chelsea beat Manchester City 2-0 in their last meeting but the Premier League champions were dominant until the Blues scored with their first shot and the League Cup holders should justify favouritism.

City were missing Benjamin Mendy, Kevin De Bruyne and Sergio Aguero at Stamford Bridge and if Pep Guardiola's men are anything close to full strength they can take the trophy with a bit to spare.

The Citizens seem to be going from strength to strength and their cup results this season underline the devastating depth of talent in their squad.

They kicked off 2019 with a crucial Premier League win over Liverpool and have won their five subsequent games by an aggregate score of 23-0, while Chelsea were fortunate to face a Tottenham side missing Harry Kane, Dele Alli and Heung-Min Son in the second leg of their semi-final.

Chelsea beat City in the Premier League but the result didn't tell the whole story and Pep Guardiola's dominant outfit should turn the tables in the League Cup final.

The Blues have an obvious matchwinner in Eden Hazard, but the Citizens can count on Sergio Aguero, Raheem Sterling, Kevin De Bruyne and David Silva among others to provide a moment of magic that could make the difference.

If the away-goals rule was in operation, Chelsea would not be in this year's League Cup final. They scraped past Spurs in the semi-finals a week after a truly woeful display at the Emirates.

Their issues run deeper than a lack of frontline firepower and City can make light work of them.

Pep Guardiola has made it clear his side will not take their foot off the pedal and they have the depth to cope with a busy February period, while Chelsea do not.

At the prices Chelsea are worth chancing.

They gave up very few chances when defeating City 2-0 at Stamford Bridge and may have the easier build-up if they go into the second leg of their Europa League tie against Malmo with a healthy advantage.

City will have to go with a full-strength side the night before when they travel to Schalke for the first leg of their Champions League tie.