Canaries may struggle to keep Wolves at the door 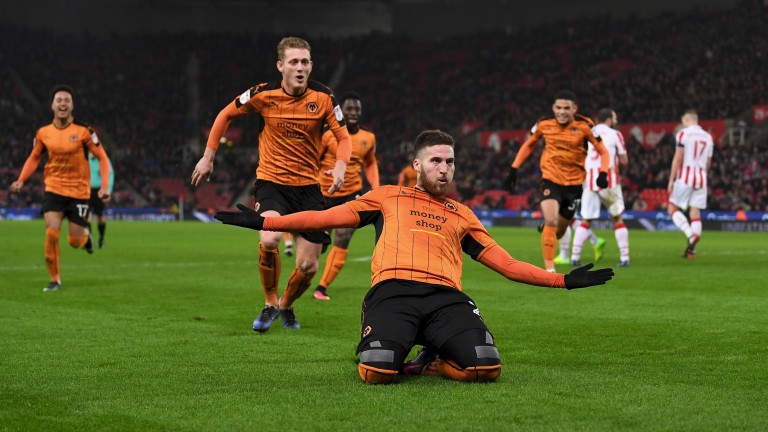 Norwich v Wolves
Norwich’s owners are doing their utmost to stick by under-fire manager Alex Neil but the calls for a change of direction could grow louder with a poor result at home to Wolves.

The Canaries have lost nine of their last 13 games and need a victory to revive slim hopes of reaching the playoffs.

However, they may not get the three points they crave against a Wolves side who have made significant progress since appointing Paul Lambert as manager in November.

Under Lambert Wolves have collected 15 points in ten games – five more than Norwich have mustered over the same period.

It doesn’t sound like a huge difference but Lambert is rightly proud of the start to his Wolves tenure after inheriting a side who were 19th in the table.

Wolves are up to 16th and have an FA Cup fourth-round trip to Liverpool to look forward to after winning 2-0 at Stoke a fortnight ago.

Norwich are going the other way – slipping from top to 11th since mid-October – and failed to register a shot on target during Tuesday’s 1-0 loss at Southampton in an FA Cup third-round replay.

And they face Wolves without suspended striker Nelson Oliveira, injured midfielders Graham Dorrans and Louis Thompson and midfielder Youssouf Mulumbu, who is at the Africa Cup of Nations.

City have struggled with a lack of confidence but should be feeling happier after Tuesday’s 1-0 victory at Sky Bet League One high-flyers Fleetwood in the FA Cup.

They won despite Johnson resting key players, including Chelsea loanee Tammy Abraham, who has netted five goals in his last four league appearances.

Abraham will pose a huge threat to Forest, who have the second-worst defensive record in the division.

And there may not be much of a riposte from the Tricky Trees, who are coming to terms with the collapse of a proposed takeover by a consortium led by American businessman John Jay Moores.

The mood of the fans sunk further with yesterday’s news that star midfielder Henri Lansbury has been sold to Aston Villa and the likely downbeat atmosphere may not help Forest’s chances of ending a run of eight games without a win.

Blackburn v Birmingham
Gianfranco Zola has failed to win any of his opening seven games as Birmingham manager but he could be celebrating a much-needed victory over Blackburn.

Blues fans might not be happy with recent results but there is significant squad strengthening taking place.

Premier League experience has been added with the loan signing of Craig Gardner from West Brom and the permanent capture of right-back Emilio Nsue from Middlesbrough.

Zola’s options are increasing but Blackburn manager Owen Coyle has a threadbare squad and his selection has become more difficult with winger Ben Marshall pushing for a move to Wolves and Marvin Emnes returning to parent club Swansea.

Marshall – one of Blackburn’s best players – will not play against Birmingham and neither will midfielder Corry Evans, who remains in the treatment room.

Rovers’ last two league victories have come against Newcastle but they have been stuck in the bottom five all season and are by no means certain to win their battle for survival.

Charlton v Scunthorpe
Sky Bet League One title contenders Scunthorpe seem to be over their blip (two draws and a defeat at the end of December) and they can record a third successive league win by defeating injury-hit Charlton in south London.

Scunny need to be respectful of the Addicks, who they have faced twice this season without success.

Charlton drew 0-0 at Scunthorpe in September and defeated them 3-1 in an FA Cup first-round tie at the Valley.

However, Charlton’s two-goal hero that day, Ademola Lookman, has moved to Everton and they are looking threadbare at centre-back with Jorge Teixeira suspended and Harry Lennon, Jason Pearce and Patrick Bauer injured.

Charlton manager Karl Robinson says he cannot remember previously having four centre-backs unavailable for a game and his injury-hit side may struggle to cope.