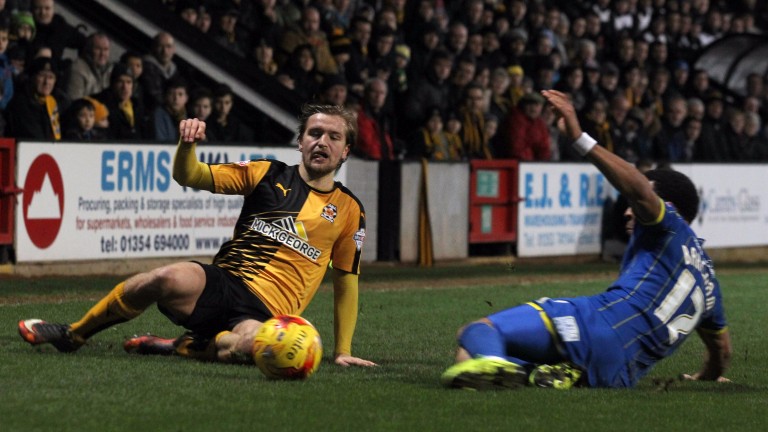 The prolific Ricky Miller earned National League Dover another crack at Cambridge United of in the FA Cup first round but the Sky Bet League Two side are worth backing to progress from tonight’s replay.

Cambridge had enough chances to book their place in round two at the first time of asking before Miller’s equaliser – one of 12 goals for the former Luton man in his last seven appearances.

And Shaun Derry’s side are improving, particularly away from home. They have taken ten points from the last 12 available to them on the road – and it would have been four wins out of four but for an injury-time equaliser from Blackpool’s Andy Taylor.

The Football League club are outsiders for tonight’s trip south, which is testament to their hosts’ excellent goalscoring record.

Saturday’s 3-2 victory at Solihull Moors featured a third hat-trick of the season for Miller and took Dover’s league tally to 37 goals in 19 games.

Team news
Dover
Centre-back Jack Parkinson is suspended after his red card against Solihull Moors and the on-loan Sammy Moore is unavailable.

Cambridge United
Shaun Derry could name the same 11 who started Saturday’s win at Crawley. Barry Corr is a long-term absentee and Adam McGurk is a doubt.

That result was even more impressive as Dover had defender Jack Parkinson sent off in the 26th minute. Playing for almost three-quarters of the game with ten men may well have taken its toll, though, and Cambridge are likely to create chances against a leaky Dover rearguard.

Lone striker Uche Ikpeazu gave Dover’s defenders a tough time in the original 1-1 draw and Derry was impressed with his side’s 3-1 win at Crawley on Saturday.

Luke Berry, Harrison Dunk and Piero Mingoia are talented attacking midfielders behind the frontman and Cambridge are improving after a poor start to the campaign.

Paddy Power offer 11-10 about Derry’s men qualifying and that looks a decent price.

Dover are full of goals but they also have spectacular off days, losing 4-1 to Tranmere in their last home game and shipping nine goals in their previous two losses to Chester and Gateshead.