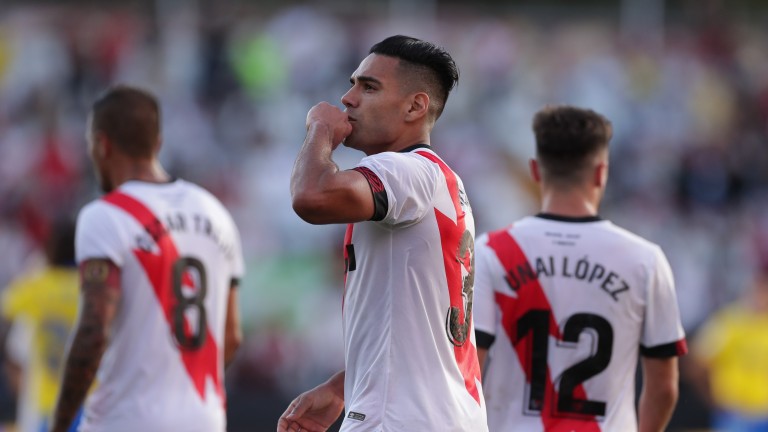 Radamel Falcao has made a strong start to his Rayo Vallecano career
Gonzalo Arroyo Moreno
1 of 1
By Liam Flin 11:50AM, OCT 15 2021

Best bets and predictions for the weekend's matches in the Bundesliga, Serie A and La Liga.

Freiburg are the only team yet to lose in the Bundesliga this season and they can extend their impressive unbeaten record with a positive result against Leipzig this weekend.

The Black Forest outfit have four wins and three draws from their seven assignments this term, winning each of their last two games against Augsburg and Hertha Berlin.

And they are worth chancing in the draw-no-bet market against the deflated Red Bulls.

Following a change in manager to Jesse Marsch and a number of key departures of the summer, Leipzig have struggled in Germany's top flight this term, losing to Mainz, Wolfsburg and Bayern Munich.

To make matters worse, they might be missing Kevin Kampl, Dani Olmo, Willi Orban and Nordi Mukiele this weekend, and Freiburg could capitalise.

Despite their off-field issues over the summer, Inter have made a solid start to their Serie A title defence with five wins and two draws from their opening seven assignments.

They are one of only three unbeaten sides in the league this term and still possess a watertight rearguard made up of Milan Skriniar, Stefan de Vrij and Alessandro Bastoni as well as highly sought-after midfielder Nicolo Barella and dangerous forward Lautaro Martinez.

The spine of the team is strong and they should fancy their chances of overcoming Lazio, who suffered a shock 3-0 defeat to Bologna before the international break.

The Rome club have recorded only three league wins this term and will not be helped by the absence of key defender Francesco Acerbi, who is suspended for this weekend's game.

They look as though they may be struggling to juggle domestic and Europa League duties and any complacency will be punished by a talented Inter unit at the Stadio Olimpico.

One of La Liga's surprise packages this season have been Rayo Vallecano and, after a slight wobble before the latest batch of international football, they can get back to winning ways against Elche on Sunday.

Vallecano were edged 1-0 by Osasuna in a dull affair last time out but before that they had recorded three wins on the spin against Getafe, Athletic Bilbao and Cadiz.

Familiar face Radamel Falcao seems to have rediscovered his shooting boots in a Vallecano shirt, netting three goals in four games for his new club this season, and with his help they should take maximum points again this weekend.

Elche recorded only their second La Liga win of the season at the start of October but suffered road defeats to Villarreal and Real Sociedad before that and are struggling for goals.

They have scored only five league goals this term and could be out of their depth away to improving Vallecano.