Brumbies ready to show they are back on the right track

Chiefs can cut loose after disappointment of first defeat 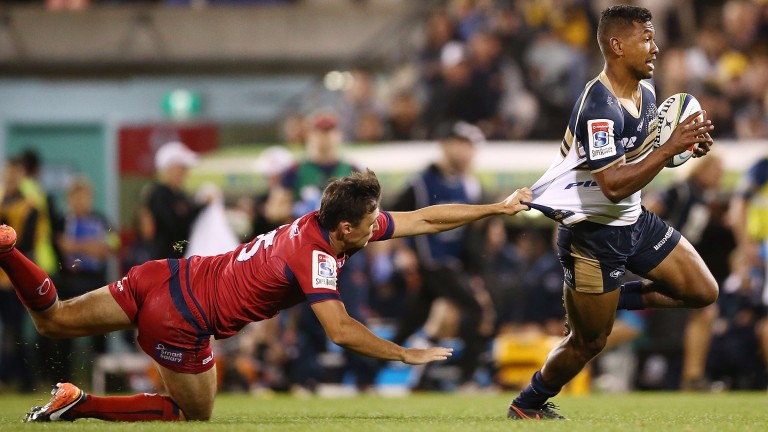 The Brumbies were convincing winners against the Reds in round seven
Mark Metcalfe
1 of 1
By Graham Woods 8:23PM, APR 14 2017

The Rebels' record of five defeats in five matches may not read so badly when you consider four of those have been against New Zealand sides while their closest game was against Aussie rivals the Waratahs.

But after a shaky start the Brumbies look to have got their house in order, emerging from their bye week with an emphatic 43-10 victory over the Reds.

All three of the Brumbies’ victories have been against Australian sides, the last two by a double-figure margin, and they can keep the run going.

The Waikato Chiefs suffered their first defeat of the season against the Stormers in Cape Town last week but put in a strong performance and this is an easier task.

The New Zealand side have never lost to the Cheetahs, although they have drawn three of the nine meetings, and their firepower should prove too much for the hosts, who have shipped 27 tries in six games.

Openside flanker and captain San Cane returns for the Chiefs.

The Stormers maintained their perfect record with an impressive win over the Chiefs last week and they are three-point favourites to follow up against South African rivals the Lions.

The Lions have lost only once - to the Jaguares in Argentina - and are coming off a bye week so they should look to hold their own against a Stormers side who put a lot into their victory last week.

There has been little to separate these teams in the past but given the Stormers’ form a narrow home win looks the best bet.

The Bulls are smarting from their defeat at the Sunwolves last weekend and although Los Jaguares were edged 18-13 by the Sharks in Durban this week, bookmakers can barely split the sides.

Jaguares coach Raul Perez has made five changes to his side, notably bringing in Santiago González Iglesias for the experienced Nicolás Sánchez at fly-half, and they could be set for another near miss.

The Bulls will dig deep after the flak they received last week and can edge a strong but inconsistent Argentinian side.

Recommendation
Bulls to win by one to 12 points
1pt 19-10 Betway, BoyleSports