No single cause can explain Premier League goal glut 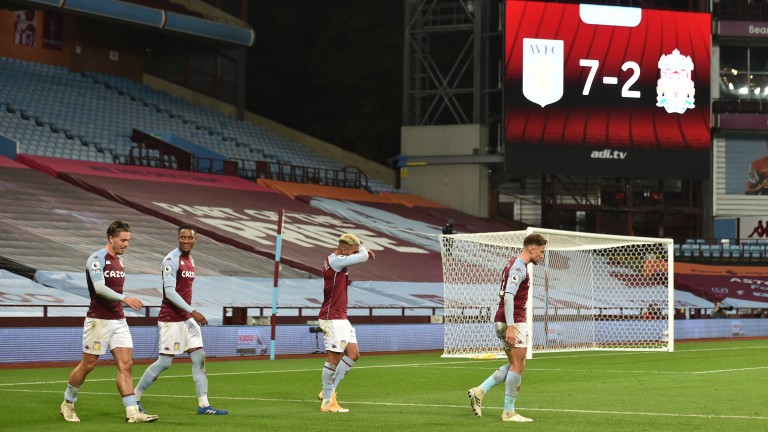 It is difficult to know what has been more enjoyable - watching all these crazy Premier League matches or listening to all the people trying to explain why the new season has started in such brilliantly bizarre fashion.

I understand the desire to try to make sense of why strange things happen, but not the way theories are put forward with such supreme confidence. And given there is such a range of possibilities behind discussed it ought to dawn on those who think they have cracked the case that they can’t all be right.

First, a recap of the facts: the opening round of matches, which consisted of eight games rather than ten because the teams involved in the latter stages of last season’s European competitions were given extra rest, were unremarkable, producing 23 goals and rewarding both teams to score backers only twice.

Then things went bananas. Match week two yielded a whopping 44 goals, followed by totals of 36 and 41, leaving us with a running total of 144 goals in 38 games at an astonishing average of 3.79.

Additionally, there have been only 16 home wins, with the away sides winning 19 times and just three draws. No wonder everyone is trying to work out what the dickens is going on.

The most popular suggestions focus on the absence of crowds, and that claim grew in popularity after Sunday’s scarcely believable afternoon in which Tottenham won 6-1 at Old Trafford just before Villa dismantled Liverpool 7-2.

The trouble with that particular attempt to put two and two together to make four, though, is that the 6-1 victory was gained by the away side and the 7-2 score line went the way of the hosts.

You can’t have it both ways. Either a lack of crowds robs home teams of inspiration or it doesn’t.

And while the low total of home wins is undeniably surprising, it should be remembered that the last nine rounds of matches last season were played in empty grounds as well, and nothing untoward happened in terms of either total goals or how they were distributed between home and away teams.

The 92 games played post-lockdown produced an average of 2.72 goals. So did the previous 288. Home wins went from 46.7 per cent to 44.8, in other words virtually unchanged.

I heard a very convincing chap on the radio this week using words like cognitive to explain why players were either performing with greater confidence or more fear as a way of explaining the explosion in goals, but it did not exactly leave me feeling the way I do when Poirot spells out how and why the janitor killed the heiress.

Also popular has been the belief that a short pre-season has affected defensive units, but that is groundless too. Do people think teams spend all summer rehearsing complex defensive drills like NFL teams? They don’t.

And it has even been suggested the ball they are using this season is to blame, a common enough belief during World Cups but a new one as far as a domestic competition is concerned.

There is only one irrefutable reason why there have been more goals than usual this season, albeit it does not solely explain the dramatic rise, and it is that far more penalties have been awarded, many for the most preposterous reasons imaginable.

There have been 25 penalties conceded, including for the innocuous act of jumping for the ball when your back is facing it, and while the pathetic new interpretations of the handball law continue to be applied the goals average will stay a bit higher than normal.

It is possible to make a case of sorts, too, for the increased risk keepers and defenders take in attempting to play out from the back creating more goals when it goes spectacularly wrong.

And the total may have been swollen to a minor extent by the recent trend of holding such a high defensive line, which Liverpool and Bayern Munich, among others, perfected with such success but which may now have been rumbled.

But the bottom line is that all these narratives that have sprung up to make sense of this phenomenon will probably look rather daft in a matter of weeks, when everything has settled back down to something approaching normal.

That is what happens every time there is a short-term statistical blip, and yet of all the many people trying to draw exotic conclusions from a period covering just a tenth of a whole season none has offered the answer that is almost certainly correct.

Namely, what has happened in the period covering September 12 to October 4 is inexplicably unusual but will almost certainly not continue.

Yes, there have been far more goals than normal, but they have not suddenly doubled the size of the goals or the lengths of matches so perhaps we should base our future predictions on many decades of evidence rather than 57 zany hours of football.

If Anthony Martial had not been unluckily sent off early in Sunday’s game or three deflected Villa shots had not flown into the net the numbers would have been far lower and the avalanche of conjecture would not have been anything like as intense.

And let’s not lose sight of the fact Championship games average barely two goals this season, despite those matches also taking place without crowds.

It has been a fascinating and dramatic start to the Premier League season, but the probable reason for the mayhem is, to quote my wise colleague Kevin Pullein, that some things just happen.

It is not an explanation that will earn admiring nods when aired at the pub but it is nonetheless the likeliest.

Friendlies do little to fire my enthusiasm

Even if the chances are the Premier League will soon regress to interesting rather than completely bonkers it is still a monumental pain to interrupt the fun with an international break.

We were led to believe it would be the logistical achievement of all time to cram everything into such a short space of time between the belated start of the season and the end, which has to be before the delayed European Championships commence.

And yet all we have had since the resumption has been four spellbinding lots of Premier League matches, what seems like about eight rounds of the Carabao Cup and now domestic conflict is halted so England can play Belgium in that new Nations League thingy and then take on Wales in a friendly.

Even more ludicrously, England will play a friendly against New Zealand next month.

I really struggle to comprehend the continued existence of international friendlies in 2020. They are dreadful, pointless encounters that the media feel obliged to cover but just serve to create unnecessary fixture congestion.

It is amazing that Premier League clubs allow their players to be subjected to the risk of injury in these games.

There also needs to be a complete overhaul of international qualification processes because while World Cup and Euro finals are among the most exciting sporting events of them all, the way the competing teams get there comprises endless mismatches and dead rubbers, with only a tiny number of decisive fixtures providing the remotest interest.

I don’t usually have much sympathy with managers whining about fixture congestion, because if the games are piling up it means their team is being successful. But this season we genuinely risk causing harm to players by trying to squeeze in all the usual components of a season including one-off dispensables like the Carabao Cup and international friendlies.

United right to hold out over underrated Romero

Sergio Romero's wife Eliana Guercio hit the headlines this week when expressing on Instagram her disapproval at Manchester United’s refusal to give the keeper a smooth exit out of Old Trafford.

She appealed to United to respect her husband and enable him to join Everton, something that did not happen before the end of the transfer window because the club apparently wanted a fee of around £10 million.

United do not need him now Dean Henderson has returned from Sheffield United to challenge David de Gea for the gloves, but they were entitled to hold their hands out for some money.

If Villa were prepared to shell out £17m for Emiliano Martinez, £10m does not sound excessive for Romero, who is better than Martinez and an extremely underrated keeper.

Everton have made an impressive start that has seen their title odds tumble from 400-1 to 20-1, despite rather than thanks to the presence of Jordan Pickford in goal, and their challenge would have been strengthened by the recruitment of Romero.