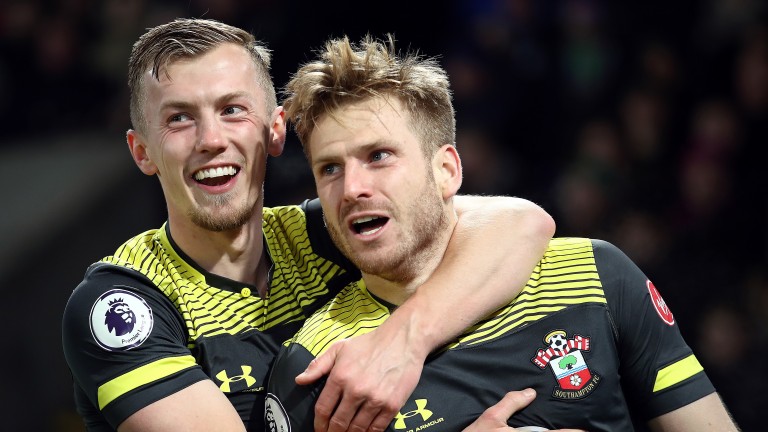 This has not been a standard Premier League season by any means, largely due to the horrendous effect VAR has had on so many matches but also because of the way the points have been distributed.

Upon completion of Wednesday night’s match between West Ham and Liverpool all 20 teams had played 24 matches, or 63 per cent of the whole season, and some clear assumptions and fascinating questions exist as we head into the final third of the campaign.

Liverpool are almost universally expected to win the title for the first time in 30 years and potentially by a record margin. The current top four are considered extremely likely to occupy the Champions League places - you can back any team other than Liverpool, Man City, Leicester or Chelsea at a minimum of 4-1 to break into the highest four spots.

And while the other two relegation places could go to any number of clubs, it is generally accepted Norwich will be relegated from the top flight for the fifth time in 26 seasons.

These assumptions exist mainly due to an extraordinary clustering of three-quarters of the Premier League participants within an 11-point gap, this large peloton comprising everyone bar the top four and the Canaries.

Manchester United have by far the lowest total of any fifth-placed side at this stage of any of the last five seasons and have no fewer than nine teams within four points of them, which makes the markets to finish in the top and bottom half of the final standings far more interesting than in recent years.

Should Chelsea falter in the coming weeks, which could easily happen given their next three league opponents are Leicester, Man United and Spurs, the battle for the fourth Champions League place will become fascinating and it might conceivably produce a surprise name in next season’s elite European club competition.

Liverpool fans can watch that frantic scrap unfold while sitting in a comfy armchair with a look of smug amusement. Their team are almost certainly about to end their astonishingly long title drought with a barely believable six-month period of invincibility.

To have won all but one of their first 23 league games is a feat that has still not received the adulation it merits even though many fans of other clubs will say they have read and heard nothing else but praise for Jurgen Klopp’s players in recent weeks.

Half of those 22 wins were by a single goal, which shows the almost flawless run has owed a bit to luck but more to fighting spirit, with four winning goals having come with six minutes or fewer to play.

Only five of Liverpool’s 22 victories going into Wednesday night’s game had been by more than two goals, which explains why, although they led City by a massive 16 points before the game, their goal-difference superiority was just one.

Liverpool have been electrifying and the Premier League trophy is almost certainly about to spend its first summer at Anfield, but it cannot be assumed they will continue to sustain this phenomenal level, especially as battle is set to resume in the Champions League.

At the other end of the table, there is a commonly-expressed belief that it will take an unusually high points total to survive, possibly even the 40 mark that was often assumed to be the point of safety even though it usually required a much smaller total to stay up.

None of the teams to be relegated in the last four seasons had more than 23 points after 24 games, which potentially means Norwich, Bournemouth, Watford and, depending on Wednesday night’s game, West Ham are the only four teams with genuine concerns.

But fans of Brighton and Aston Villa on 25 points will not feel remotely calm as things stand, and the four teams on 30 points will gain no comfort from the fact there are only five clubs beneath them.

Then again, bet365’s intriguing market on how many points the team who finish in 18th position will end up with suggests it will take an almighty collapse for the relegation battle to involve anyone but the current bottom five as they go evens over 36.5 points and 8-11 under.

A personal view on the relegation market is that Norwich are too short at between 1-10 and 1-16. They are clearly too easy to score against but have achieved some decent results against clubs at the upper end of the table and possess a reliable scorer in Teemu Pukki.

But if I was opening a new long-term position on the Premier League now it would undoubtedly be Southampton to finish in the top half of the table at 5-4.

The Saints, who were playing better than their position indicated during a difficult first part of the campaign that yielded just eight points from 12 games, have hit form and have amassed 23 points from their next dozen matches.

They look full of creativity and goals and have the steel to kick on and enjoy an excellent remainder of the campaign. I would not put anyone off backing them at 33-1 to finish in the top six, given their hot form and their position just three points off fifth place.

Let’s just hope, however, that this intriguing but untypical season can finish with a table based on merit and that VAR does not transform itself from an acute annoyance to an utter catastrophe.

It is hard to have much sympathy with the on-course bookmakers who each accepted a £5 bet from a 16-year-old punter last year, albeit fines of up to £7,000 feel closer to harsh than lenient.

When I first went racing, be it horses or dogs, I was never refused a bet on account of my age even though at 16 I looked around 12. Instead of handing over a brightly-coloured ticket the layer would usually take my money and say to his clerk: “Down to boy.”

But times have changed and bookies know these days that they cannot mess with the admirable push to create a safer gambling environment, so even though many 16-year-olds now could pass for being at least 20 you can’t take any chances even if the bets are, for once, flying around at the biggest Flat meeting of the year and it doesn’t feel like much time to do a thorough assessment of every punter’s age.

However, there is something fundamentally wrong when a 16-year-old is employed to place £5 wagers at a racecourse and potentially catch illegal laying when it is perfectly fine for people aged 16 to buy lottery tickets and scratchcards to their hearts’ content.

I am certainly not advocating 16 and 17-year-olds should be allowed to bet how and when they like, but I do find it unjustifiable that races at Royal Ascot are banned for this age group but scratchcards, with their gormlessly seductive names and unmissably conspicuous sales points positioned right next to the tills and the sweets, are not.

There is no skill to winning on a scratchcard, unlike fixed-odds betting. And while a small amount of stakes goes to worthy causes, the exchequer benefits from bookmaker profits as well, as evidenced last weekend when it was revealed bet365 boss Denise Coates is the highest tax-payer in Britain, having contributed £276 million last year.

Nobody in their right mind would oppose the concept of responsible gambling, and the exercise to assess the extent of underage betting at Royal Ascot was validated by the fact that seven of 17 targeted bookies accepted a bet from someone aged 16.

But it amazes me that nobody involved in the organisation of the checks at Ascot appears to have ever stopped to wonder why it is illegal to put £5 on a horse to win the St James’s Palace Stakes but not to spend the same amount on scratchcards.

FIRST PUBLISHED 7:00AM, JAN 30 2020
Manchester United have by far the lowest total of any fifth-placed side at this stage of any of the last five seasons