Glory or bust for Lampard at Chelsea with nothing in between 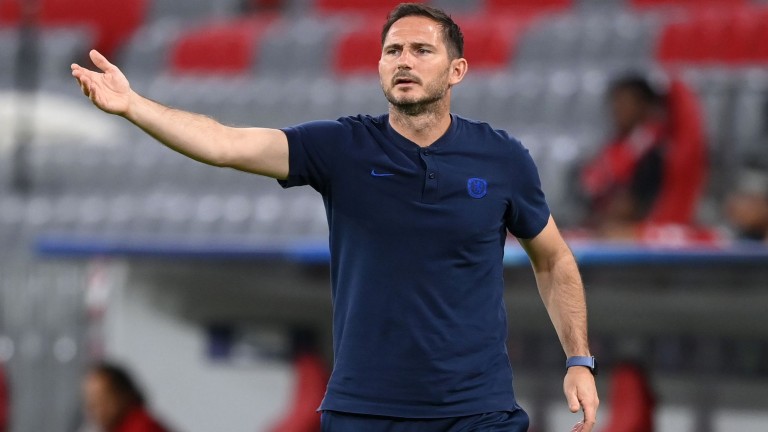 We played a match in a quarry last night. Got beat 5-3 on aggregate.

That’s my favourite football joke, although I have been getting more laughs in recent days when suggesting Chelsea must now be considered genuine title contenders.

Having backed Manchester United when they were showing such impressive performance levels in the post-lockdown period, I have been adding Chelsea to my 2020-21 Premier League portfolio as a result of their formidable show of strength in the transfer market.

The right gaps have been plugged with players of the highest quality and if the top-notch goalie they are crying out for arrives and they add Declan Rice to the list of stars who have already joined it will be hard to argue they are incapable of bridging the 33-point gap to Liverpool and 15-point gap to City from last season.

Having been prevented from spending by a transfer ban last summer, Roman Abramovich has not mucked around in his bid to get Chelsea back to the top of the tree and when the teams are announced before the opening games of the new season it is likely to be clear to all that the Blues have undergone a massive upgrade during the short break.

Liverpool will be strong again but possibly not as lucky with injuries, while even if City get Lionel Messi they still have some work to do to regain their position as top dogs - and the shift in their Betfair exchange price from 2 to 1.7 since it was revealed the legend wants to leave Barca looks fairly presumptuous to me.

One person who hopes that suggestions Chelsea can win the title continue to be met with scornful laughter is Frank Lampard, for whom next season represents something of a glory or bust mission.

He went into his first campaign in the Stamford Bridge hotseat in a totally different position. New to the job, the darling of the club thanks to his magnificent service to them as a player and with expectations nice and low due to their inability to buy players, Lampard was able to feel his way in, safe in the knowledge he was assured of a long honeymoon.

Now, however, the pressure has arrived along with the big-money buys. And even though most people do not expect miracles from Chelsea, Abramovich will demand his latest splurge is rewarded with a vastly improved attempt to win the league.

That creates a potentially interesting bet, because Lampard was one of two names that leapt off the screen when I took my first look at the sack-race betting this week.

He can be backed at 33-1 to be the first Premier League boss to leave his position, and that looks appealing either as a standalone wager or a way of hedging a Chelsea title bet.

Because if the Blues look like failing to meet their owner’s expectations in the early weeks it is unlikely sentiment will keep Lampard in a job. I fancy his heavily bolstered squad to start well and maintain a strong challenge right through until next spring, but the former midfield ace will be under no illusion that he needs to keep tabs with the perceived big two from the outset and 33-1 that Chelsea slip off the pace and he is replaced is a price that cannot be ignored.

Just down the road, meanwhile, Scott Parker is another vulnerable west London gaffer and at 11-1 he is an even more tempting proposition to be the first to be shown the door.

Fulham has not been a hotbed of loyalty in recent years, with Slavisa Jokanovic being the first Premier League manager to leave two seasons ago, and, while the Cottagers have a relatively manageable first nine games, it is still easy to see them struggle for points and intensify the pressure on Parker.

He did well to steer them back to the top division at the first time of asking, but theirs is not a strong squad, and of the leading contenders to suffer the pain of being the sack-race winner Parker looks the safest choice at 11-1.

Age of the tennis titans is coming to an end

One of the most surprising pieces of current sporting trivia is that no man born after 1988 is able to boast that they have won a Grand Slam tennis title.

That is a consequence of the sport having been dominated by that legendary trio of Novak Djokovic, Roger Federer and Rafael Nadal, who since 2004 have captured 55 of 65 Slam finals, while Stan Wawrinka and Andy Murray, both well into their 30s now, have won three apiece.

So 2014 US Open champ Marin Cilic, who turns 32 this month, is the youngest male Slam winner on the planet, an incredible stat given the world’s leading players have tended to be at their most successful when their age starts with a two.

By contrast there are 11 women younger than Cilic who have won a Slam final.

But it is a record that could shortly come to an end, with Nadal, Federer and Wawrinka skipping the ongoing US Open and Murray a huge price after his serious injury problems.

The onus is firmly on Djokovic to keep the flag flying for the 30-somethings and he holds the mantle of favouritism at a shade of odds-on as the tournament progresses through the early rounds.

And while a stack of younger players are battling to add their name to the sport’s elite roll of honour, assuming he took out Kyle Edmund last night it would be bold to bet against him landing an 18th Grand Slam crown to keep the flag flying for this remarkable group of ageing titans.

I once went on a bus tour of the Blue Mountains in Australia. We left Sydney at 9am and got back there at 9pm.

It was brilliant. We visited towns, villages, beauty spots, rainforests and stunning viewpoints and capped it off with a river trip and a beer. Every bit as impressive as the spectacular scenery was the bus driver’s ability to deliver an insightful narrative almost non-stop from start to finish.

He gave us history, trivia and cheeky one-liners from dawn till dusk, never once straying into areas where he could have been accused of being annoying or excessively chatty.

I have been minded of our amazing driver while watching the early days of the Tour de France, which viewers can these days enjoy from the start of each stage to the finish.

This is, of course, good news and spares Tour fans the need to keep checking websites to see how the action is unfolding.

But it also creates the problem of producing incessant commentaries that lack the insight of our friend from Down Under, which leads to noise pollution.

Here’s an appeal to those who are doing long days in the gantry: give it a rest at times. For long stretches of stages nothing much happens, so don’t feel obliged to keep rabbiting on.

A day on the sofa watching the Tour is like a bus trip around beautiful France. Please just let us look out of the window and enjoy the view without needing to fill every single second of airtime.