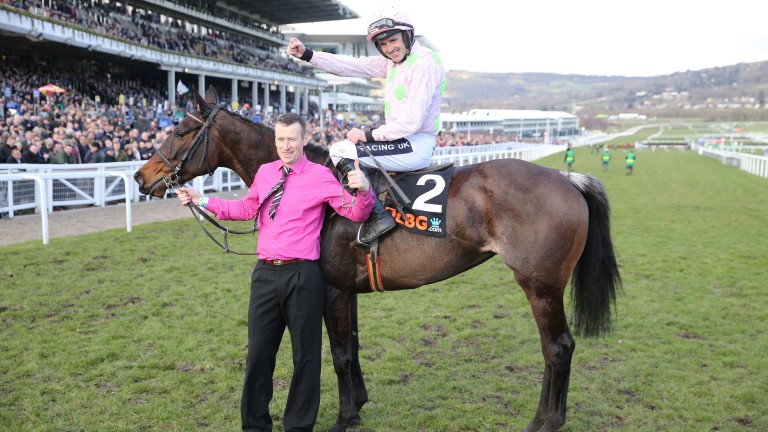 Benie Des Dieux and Ruby Walsh after their victory in the 2018 Mares' Hurdle at Cheltenham
GROSSICK RACING (racingpost.com/photos)
1 of 1
7:10PM, MAR 4 2020

We are five days away from the golden window when betting on the Cheltenham Festival offers the biggest potential for profit, so it is hard to think of a good reason to bet on the greatest week in racing until then.

The sweet spot starts shortly after 10.30am on Tuesday and ends when the roar goes up to signal the start of the Sky Bet Supreme at 1.30pm.

During that spell punters are armed with all the information that is denied those who take their chances ante-post. By then, thanks to the overdue decision to apply 48-hour declarations to every race at the festival, the fields for the first three days are all finalised, and that takes virtually all doubts out of the final day as well because if, for example, the horse you fancy for the Albert Bartlett is not in the Ballymore, it is going to take its chances in the longer race.

Additionally there is no more guessing about the state of the ground or who will ride what, and best of all the bookies are waging war with each other to display the best prices, the most generous place terms and an array of concessions and special offers.

That makes it a great time to place potentially life-enhancing multiples as well, especially with the boosted place terms after a winter of such a skinny fifth-the-three diet.

Obviously you still need to pick the right horses, but this window of opportunity is when I will be placing the majority of my Cheltenham wagers, not least because the guessing game involving who runs in what will largely have been played.

As it happens one of the key questions as regards targets has already been answered with Honeysuckle’s connections having stated on Tuesday that their rising star will be aimed at the Close Brothers Mares’ Hurdle rather than the Champion Hurdle.

I was expecting a fascinating game of brinkmanship lasting right until 10.30am on Sunday morning which is the deadline for revealing which races Honeysuckle and Benie Des Dieux will compete in.

I imagined Henry de Bromhead and Willie Mullins trying to second-guess one another in a dramatic standoff that had a variety of outcomes, but instead the Honeysuckle camp blinked first and revealed their hand.

My first reaction was that of surprise, especially as she is owned by Kenny Alexander, the canny boss of GVC, the company whose brands include Coral and Ladbrokes.

When William Hill announced last autumn that they were to close 700 betting shops I imagined Alexander reacting with a broad smile. The complex business of shutting the right shops in the wake of the FOBT stake restrictions suddenly became much easier for him because his rival company had announced their plans in one fell swoop.

And yet here he was, months later, showing his cards to Willie Mullins, Benie Des Dieux’s trainer, thus allowing him five days to mull over whether to take on his pride and joy, go for the more lucrative Champion Hurdle or step up to take on Paisley Park in the Stayers’ Hurdle.

But Alexander is a vastly shrewder man than me, and the more you think of it the more sense it made to be the first to reveal the mare’s target.

I believe Honeysuckle would have won the Champion Hurdle unless her rival mare ended up in opposition, but having set their hearts on the Close Brothers it was a clever move to clarify their plans.

What they wanted to avoid was Benie Des Dieux taking on Honeysuckle, and while that may still happen, the best way to make
sure there was no clash would have been to make clear they are no longer thinking of stepping her back to two miles.

However the latest twist came yesterday when Mullins declined the chance to supplement his mare for the Champion Hurdle, meaning she will be involved an enthralling clash either with Honeysuckle on Tuesday or with Paisley Park over three miles on Thursday.

The surprise is that connections of neither mare looked at the weakness of the Champion Hurdle field and considered it to be there for the taking.

The good news is all will be revealed on Sunday, leaving plenty of time to consider the implications from a betting perspective.
It is high time the BHA does the right thing and ensure 48-hour declarations apply to all jump races. There is no justification for not doing so.

Easy steps to stop co-commentators spoiling my enjoyment of football

The overall standard of sport broadcasting in Britain is extremely high but there is one specific area in which that is not the case and it is becoming increasingly irritating as a viewer.

It is hard to know why there is such a paucity of decent football co-commentators but it is undoubtedly the case that there are too many poor or downright woeful operators in the gantry.

In the grand scheme of things this is not a major problem but for those of us who watch a lot of football it is a distinct nuisance because it impacts significantly on the viewing experience.

Footballers get coached extensively from the moment they get signed to academies before they have reached a double-figure age right through to retirement. Each training session and match is rigorously analysed and feedback is provided on their every move, often in a far more aggressive manner than would be considered acceptable in the modern workplace.

Yet when they retire and embark on a career in TV or on radio it appears to be rare bordering on unheard of that they receive anything but the most basic guidance. I have spoken to a number of athletes who expressed surprise that they basically had a microphone shoved in their hand and were told to get on with it.

Furthermore, they were left to hope their performances came up to scratch because there was rarely any comment from their employers as regards to how they had done.

So in an attempt to help raise the standard of co-commentary here is some well-intended feedback from an avid consumer who wishes they did not have a feeling of dread whenever it comes to discovering who the ex-pro alongside the main commentator is.

First up, try not to be annoying. You are my guest alongside me on the sofa and I don’t want to spend 90 minutes in the company of someone who is constantly spouting rubbish.

Only speak if you have something interesting to say. When I go to a game I never hanker for a commentator to be wittering on and the same applies at home. I want the stadium noise because the sound of a football crowd is stirring and powerful, telling its own story of how the game is ebbing and flowing and while a good commentary team can augment that with some insight a bad one is just noise pollution.

Don’t refer to the commentator by name. You might be sitting next to “Fletch” or whoever but you are not engaged in a private discourse with him. You are talking to us, the paying viewers.

Don’t try to apply narrative to everything. An old player, for example, rarely actually “uses all his experience” when shielding the ball for a goal kick, he’s just doing what any player would.

Don’t refer to momentum. Ever.

Don’t be afraid to refer to your own career. If you played at a ground with a particularly buoyant or hostile atmosphere, tell us what it was like.

Have a laugh sometimes. It’s only football.

Let us know when a team has changed its formation during a match, especially after a substitution has taken place.

Don’t hammer referees if you are not willing to hammer players and managers equally vehemently. It’s unfair.

And most of all, whatever you do, please don’t say someone should have at least hit the target. It’s simply the most inane comment anyone can make, especially because when a player does hit the target and it goes straight to the keeper he then gets pilloried for not having placed his shot more accurately, which in itself increases the chances of missing the goal.

There are a few good co-commentators but in general I find myself yearning for the only sound I hear during matches to be the noise of the crowd, and that is something that broadcasters should be striving hard to remedy.