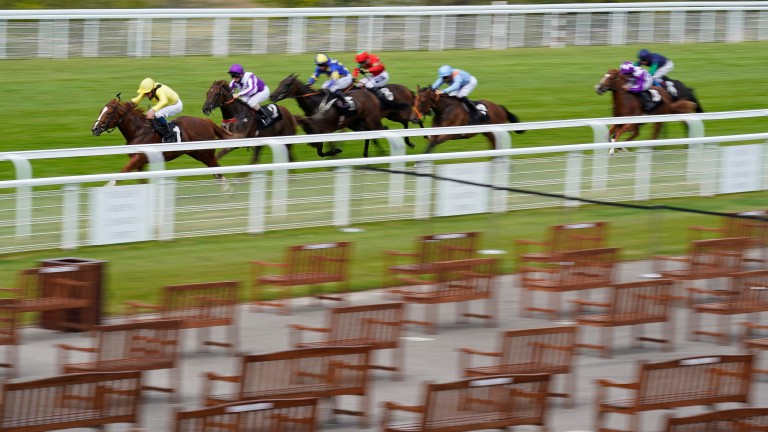 It’s the big days you miss, being in the throng by the rails as the best horses in the sport flash past you, your heart beating like mad as the mystery of who will be first to the line unfolds and the cheers of the crowd grow to a crescendo.

It’s the summer highlights too, the sunny afternoons at Ascot, Goodwood and York, drink in hand, pleasant company and a happy vibe.

And it’s also those beautiful winter midweek escapes to Fontwell or Plumpton, while everyone else is working, when you can stroll from paddock to ring to bar and back again at your leisure, maybe seeing the odd friendly face but generally enjoying the chilly solitude of an afternoon watching hardy jumpers do battle.

Going racing is something none of us will take for granted when that avenue of pleasure is reopened, and it is to be hoped that will happen as soon as possible.

Clearly racecourses, gagging for customers, must take their rightful place in the queue, because it is hard to make a credible case for people being permitted to attend the Cesarewitch while their children are still unable to attend lessons.

But, on the other hand, pubs are back in business, as are shopping centres and casinos, so there is a case for saying courses should already have been allowed to reopen their doors, as they have in France, where a capacity of 5,000 people per meeting has provided such a crucial lifeline to tracks.

As things stand, racegoers should be allowed to return from the start of October, although that date has to be regarded as ultra-provisional given that Goodwood’s plans to welcome 5,000 people through the gates for the final day of the Glorious meeting were scuppered by a government U-turn just 24 hours before the padlocks were due to be opened.

Trial meetings are pencilled in for next month, with the St Leger meeting, Cambridgeshire day and the Ayr Gold Cup mooted as possible test beds. If all goes well there are hopes the gates will open permanently from October 1, although that is contingent on the key coronavirus statistics continuing to go the right way.

Even if that happens it will not be like a switch has been flicked and a day at the races will feel just like it always did. There will be limits on numbers, and access will be less free than usual.

Looking further ahead, courses will be keen to know how many people they will be allowed to accommodate for the major festivals, because while a cap of, say, 5,000 people is not going to blow a hole in Southwell’s budget, the implications for the sport and its ability to fund its professionals are huge if the 2021 Cheltenham Festival feels like the AGM of the society of claustrophobia sufferers.

As well as the number of infections and deaths continuing to diminish, it will require the media to play their part in ensuring there is minimal anxiety among the population at the prospect of crowds being able to attend sport events.

I am dubious about that happening. From the moment the media got their hooks into the 2020 Cheltenham Festival taking place when they felt it should not have, there has been a summer-long exercise in scaremongering by far too many media companies.

Fatality numbers, while horrifically high overall, have come right down, and techniques for treating the most seriously affected have improved significantly as the world’s medical experts have shared their learnings.

Yet in the era of clickbait, sensible reports of progress in the fight against the pandemic have been relegated to the lower reaches of websites in favour of stories designed to create unease and therefore revenue-generating traffic.

A second wave is being talked up as a certainty despite none yet occurring anywhere.

Nobody knows what will happen, but the continued media focus on negativity is acutely unhelpful.

Day by day, hopefully this horrific virus will keep posing less danger, and, trivial though it undoubtedly is in the grand scheme of things, racing can gradually return to its wonderful old self, safely and sensibly.

Oliver the best of a fine bunch of refs

This column has argued before that there should be a Premier League referee of the season award. They have one in Serie A and should do so here, both to reward excellence and to give aspiring arbiters a feeling that refs are valued and appreciated.

Obviously, their importance has been massively diluted since VAR was introduced, but we should still recognise just what a superb group of top-tier officials we are blessed with, so in the absence of anyone else showing any inclination to organise something suitably prestigious, it is left to the Thursday Column to do the honours.

Top dog has to be Michael Oliver, who my daughter claims looks like a hawk but remains as eagle-eyed as ever and should, like all his colleagues, feel insulted that anyone thinks it is necessary to subject his decisions to video scrutiny.

It surprises me that he was not selected to take charge of the Champions League knockout matches in Portugal, with the inferior Anthony Taylor getting the nod instead.

Special mention must go to the evergreen Mike Dean, who remained a brilliant operator in his 20th season as a Prem referee and also created a rather surreal lookalike when he appeared after lockdown sporting a beard that made him bear a striking resemblance to Radiohead frontman Thom Yorke.

And talking of music-referee doppelgangers, the best emerging whistler was David Coote, who could enjoy a lucrative sideline opening summer fetes as Jools Holland should he so desire.

Coote established himself as a top-rank operator and is sure to get plenty more big matches next term.

I yearn for the day these highly-skilled officials are allowed to get on with the task of controlling games without external interference, but it is not going to happen so I promise I will finally shut up about VAR as of now.

Jester's complaints were no laughing matter

The Jester from Leicester remains one of the most mystifying nicknames in all of sport because there is a distinct shortage of evidence that Mark Selby is some kind of comic genius.

He may have made the odd droll aside during a frame at some point in his fine snooker career, but all I ever see is a serious-looking guy earnestly trying to pot balls or set dastardly tricky traps for his opponent.

And after his narrow Betfred World Championship semi-final defeat to Ronnie O’Sullivan, laughter was in desperately short supply as Selby bleated about his opponent disrespecting him and the sport in a woeful display of poor sportsmanship.

Selby has a steel will at the table and is capable of suppressing rivals with greater flair, something he was able to do against O’Sullivan during their long encounter, to the extent that it looked like the Rocket’s resolve was close to breaking point.

At one stage during a particularly testing safety battle O’Sullivan lost patience and started smashing the balls around the table without seeming to be fussed what the consequences would be, which is what Selby said he found so disrespectful.

There is a problem with that view, though. O’Sullivan won, so any accusations that he played in a manner not in keeping with the spirit of the game were invalid. If O’Sullivan was being that unprofessional it should have increased Selby’s chances of winning, but it didn’t.

To his credit, O’Sullivan took Selby’s sour comments on the chin, said he hoped he had not upset him, and explained that getting out of snookers was not the strongest part of his game so he just wanted to get the safety battles over, allowing him to focus on break-building.

Selby is an excellent snooker player and was bound to have been bitterly disappointed to lose such a tight match, but he did himself no favours with his remarks.