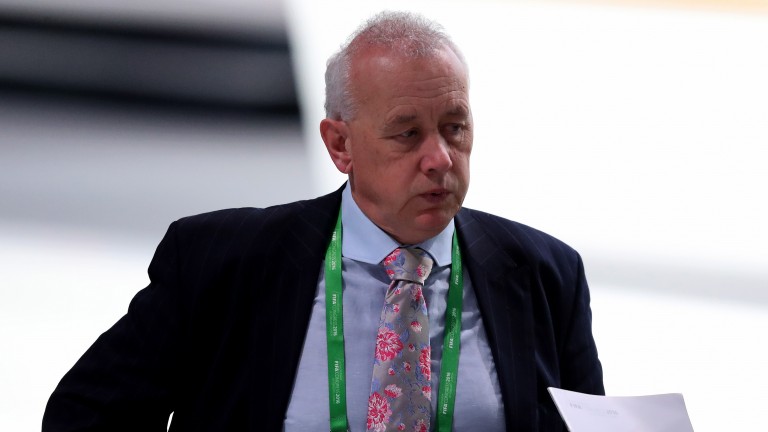 If the big picture was of the owners of Liverpool and Manchester United depositing even more money into their bank accounts, Project Big Picture would have been accurately named.

If it had depicted a world in which everyone from the peak of the Premier League to the foot of the pyramid is basking in long-term prosperity it wasn’t.

Thankfully, this cunning plan to make the rich even richer proved about as successful as Baldrick’s cunning plans and was shut down at a meeting of the Premier League clubs yesterday. Good.

Let’s not kid ourselves that John W Henry and the Glazer family would get together to come up with a plan for the future of English football that had as its guiding principle the fair distribution of funds for the benefit of the many rather than the few.

Only a fool would believe it was anything other than a ruse to suit them and their pockets. These are not people with a familial love of English football going back generations. They are in it for the money and that in itself was a good reason to view Big Picture with suspicion.

You may decide that if EFL chairman Rick Parry backed the proposals it couldn’t all be bad, but the former Liverpool chief executive knows how serious the financial situation is further down the ladder and was therefore bound to be willing to grasp at any buoyancy aid that was being flung into the water.

In fairness to the architects of the plan, even they have been here long enough to understand the need for a solid structure to the English game, but that in itself was never going to be the driver for such a radical proposal.

Perhaps the best way to judge whether Big Picture was good or bad was to look at it through the eyes of the people who fund English football - the fans, or consumers as they are probably referred to in the boardrooms of the north-west’s powerhouse clubs.

Without their passion for the game, there would be no gate revenues, TV subscription income or matchday profits. Sponsors would fade away and the notion of paying the reserve left-back 50 grand a week would soon look even more absurd than it already does.

There were, of course, bits that received widespread approval. To get any power grab over the line you have to give as well, and this plan included a £250 million Covid bailout and a guarantee that the Championship, League One and League Two would share a quarter of the Premier League’s annual income.

Those spoonfuls of sugar would taste good to supporters of any club whose future is jeopardised by the virus, but then things got harder to swallow.

The Premier League was going to shrink by two teams to 18. There is no logical reason why any fan would welcome that, and nor was there a loud collective voice bellowing for the scrapping of the Carabao Cup, which was also on the list.

And as for the nine clubs chosen as the so-called long-term shareholder group, what exactly were Southampton doing there? Unless you support Portsmouth the Saints are a hard club to dislike, but they were in League One as recently as nine years ago.

Thankfully we no longer need to see Big Picture as a destabilising threat to English football, but that does not mean the people behind it will suddenly go quiet. Their desire for a bigger slice of the cake has not diminished.

It is not hard to see where all this is heading, of course. This was not about cutting down the number of fixtures so the poor players can let their injuries and niggles heal properly. It was about creating space for more fixtures in the form of a European Super League, the mirage that has shimmered in the eyes of club owners for decades but never materialised because fans did not want it then and do not want it now.

English football is not in perfect financial shape at the moment, especially with the crippling effects of Covid, and perhaps there is a better, fairer way of organising and funding the sport so that it has a brighter future.

But this scheme was not it, and rumours of a breakaway as a consequence of Big Picture’s failure should worry nobody. If the giants want to do that they are welcome to give it a try.

Football fans may have been disappointingly accepting of the introduction of VAR but there are limits to their tolerance and anything that breaks apart the long-established and much loved structure of the game will simply not be allowed to happen.

Here we are again then, surprisingly and extremely disappointingly. Three years after a three-year-old won a race for two-year-olds at Yarmouth because of an identification mix-up, two fillies ran in a Group 1 at Newmarket last week carrying one another’s saddles and jockeys.

After the Yarmouth fiasco the BHA initially warned that procedural changes to prevent a repetition “could come at a significant cost to the industry”, as if the basic act of ensuring horses were partnered by their declared jockeys was considered anything other than utterly essential. Subsequently, though, changes were made that the BHA claimed had “closed the loophole”.

Not so. The farcical situation that saw two fillies trained by Aidan O’Brien incorrectly saddled up and legged up, especially in such a prestigious race, was inexcusable.

O’Brien, ever the gentleman, appeared willing to carry the can, issuing an apology and stressing that, although he is currently using a team of England-based staff due to Covid restrictions who are not as familiar with his runners as their usual grooms would be, there was no excuse for the confusion.

But he had every right to query the BHA’s raceday procedures, which are still being found wanting, a lamentable state of affairs given how recently this happened elsewhere in East Anglia.

While the precise circumstances that led to Mother Earth and Snowfall running as each other have yet to emerge, it is clear that neither was given the second scan of their ID microchip after they had been saddled and led into the parade ring.

This is when it needs to take place. Doing it prior to saddling leaves the door open to this kind of embarrassing farce and it is ridiculous that the lessons of the Yarmouth incident have not been properly heeded.

O’Brien was clearly mortified about the Newmarket mistake, but it is not just to avoid accidental misidentification that the procedure needs properly tightening up once and for all.

The Ballydoyle legend is as likely to rob a bank as he is to organise the deliberate switching of two of his runners, but other people could be less scrupulous and it is to avoid intentional as well as inadvertent switches that the BHA must finally get to grips with this and ensure it never happens again.

It really cannot be that difficult.

Oxx's legacy is certain to live on

It is not just because of their own brilliance that Sea The Stars, Frankel and Enable, the three greatest British and Irish Flat horses of the 21st century, are so loved.

The respect and affection we had for their connections added to the adoration. Henry Cecil’s heartbreaking cancer battle was closely woven in to the Frankel story, while Enable was the icing on the cake of Frankie Dettori’s amazing career, and her fans also admired the eloquence with which her trainer John Gosden kept everyone so insightfully updated on her progress.

Sea The Stars, meanwhile, was trained by the hugely respected John Oxx, who announced his retirement the same day it was revealed Enable had run her last race.

It was a privilege to have been there for Sea The Stars’ finest moments and also to have spent time in Oxx’s company at the 2009 Peter O’Sullevan award lunch.

Having illustrated yet again what a superb trainer he was by steering the superstar colt to a perfect three-year-old campaign that took in victories in the 2,000 Guineas, Derby, Eclipse, International, Irish Champion and Arc, Oxx showed what a classy individual he is that afternoon in London’s Dorchester Hotel.

He and his wife Catriona were the final guests to arrive at our table and, despite being the man of the moment just weeks after the Arc triumph, the pair of them took the trouble to go around to all of us introducing themselves and asking how we were.

He then spent time with everyone who wanted to say hello, well done and how is the horse, in a way that many other successful people sadly find themselves unable to.

Oxx’s long and brilliant career will end soon, but his legacy as a titan of his profession and a man of extreme class will live on.