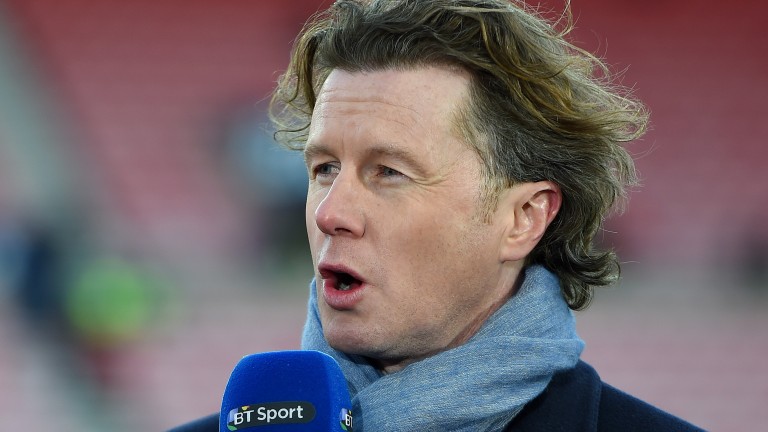 Can you please try to improve the quality of your co-commentary before the start of next season?

It matters because, while BT Sport offer us the option of fake crowd noise or no fake crowd noise (although they flag this up by annoyingly informing us the authentic audio is available on something called BT Sport Extra Super Duper HD 1X or something but don’t give us any clue how to access it) they don’t allow us to hear the sounds of the stadium but not the voices from the gantry.

Therefore, unless we just mute the sound completely, which I have had to resort to doing even though it is far from satisfactory, we are stuck with you.

When you started the co-comms lark I had high hopes. You were a great player to watch and always came across as a great bloke, which you may well be. Your voice was, and still is, amusingly similar to that of Paul O’Grady but that’s no bad thing.

However, it quickly became clear you were not only going to fail to fill the void that still exists since Andy Gray’s departure from Sky but you were actually going to detract from our viewing pleasure.

You are failing to fulfil the prime purpose of a co-commentator, which is to tell us not what happened but why it happened.

This is what the chronically under-used Stewart Robson does so well, as does Gary Neville, who is also superb. Listen to them and learn.

In fairness to you, you may well be suffering from a syndrome that exists in many areas of sport broadcasting, namely that former stars get so little coaching in their new role, which is partly why, especially in football, the overall quality is not what it ought to be.

Then again, you must be getting some feedback because it is noticeable that you have reduced the number of times you say “Fletch” during matches. That’s good. You’re talking to us, not Fletch.

And it is possible for ex-players to become better pundits, as Alan Shearer showed when he took his game to a significantly higher level once he saw how boldly and brilliantly Neville and Jamie Carragher expressed their opinions.

Do more research. Don’t refer to a player as “the 25” as you did the other day. When a substitute is coming on let us know what kind of player he is and what formation changes might result from his introduction.

Be consistent with your views. While PSG were on level terms with Atalanta you made no mention of the French side’s lack of character but once Atalanta scored you insisted every other minute PSG were a bunch of softies who folded tamely season after season, only for them to bravely fight back for victory with two goals in stoppage time.

Don’t assume everyone is desperate for English teams to win and when you see a replay that shows your original assessment was wrong don’t be afraid to change your mind.

When Neymar was kicked in the Champions League final you claimed initially there was “nothing in it”. A replay showed he took a proper whack to the shin but you stood your ground, which just looked silly.

And let’s talk tactics. We don’t necessarily need phenomenally intricate analysis of every tiny tweak the managers make during games, but some appreciation of changes to formation and approach is necessary.

Andy Townsend knew how to strike the balance between showing he was aware what was going on out there and not baffling those who don’t watch games with such a forensic eye.

You shy away from almost every tactical chat, as exemplified by a moment in Sunday’s final when Darren Fletcher said how impressed he was with PSG’s willingness to retreat so quickly into their rigid defensive shape every time Bayern encroached into their half. You could barely bring yourself to respond with a muttered “yep”.

I hope you can up your game, because as things stand you are committing the cardinal sin of making viewers wish you were not saying anything at all. If you were sat behind me at Palace every game I would genuinely ask to be relocated.

But it is still early days and you are blessed with a good broadcasting voice and a natural likeability that can help you reach a far higher standard if you put your mind to it and heed the words of Tony Cascarino, one of the best examples of a footballer making a successful transition to the media.

He said he quickly realised that he was a journalist rather than a footballer and that he had a duty to his employers and to his audience to say it as he saw it and to ensure his views were interesting and relevant.

Here’s to a new season and a new you.

The 2020 Flat season has been a roaring success despite being so seriously disrupted by Coronavirus.

The action has come thick and fast, creating a compelling and fascinating tempo, we have had some superb Sunday cards, and Ghaiyyath, Love, Stradivarius, Battash, Enable, Palace Pier and Mohaather have ensured an abundance of star quality across most divisions.

The middle-distance three-year-old colts have, for the fifth year in succession, been a disappointment, but otherwise there has been very little not to like apart from the obvious fact that we have been unable to marvel at all these superb meetings in the flesh.

However, there is one aspect of the first three months of otherwise flawless racing that has been disappointing and it needs rapid eradication.

I refer to the act of a jockey pulling their mount’s tail forwards in an attempt to get them to enter the starting stalls.

This was once a rare sight but is happening far more this summer. It is perfectly possible that it is as a result of Covid-related changes to how stalls handlers are allowed to operate in that only two can work together to shunt a horse into the traps rather than the four that used to be permitted (and given 16 rugby players are allowed to participate in scrums it’s probably time to revert to the old loading techniques).

But while we all want installation to be as quick as possible, yanking a horse’s tail in this manner is not an acceptable solution. It looks awful and I am surprised neither the regulator nor the Professional Jockeys Association has given it a second thought.

It is said that lifting a horse’s tail prevents it kicking out dangerously, but it still looks like the tail is being pulled and perception and visual impression are more important than many racing folk appreciate.

Two years ago Raul de Silva was banned for gently tossing a handful of Polytrack compound at his mount in a bid to coax her into the stalls, which was ridiculous at the time and looks even more preposterous when compared to these regular attempts to create the same outcome by a far more drastic method.

I have heard it said the horses feel no pain when they are having their tails pulled, but if that was the case it would not work, and since when has a human been able to receive confirmation from a horse how much it is hurting?

Even if the pain is not acute, which I am perfectly prepared to accept, it just looks bad and, more importantly, is an open goal to racing’s opponents.

Like it or not, there are animal rights activists who use racing’s high profile to raise theirs, and while their claims that racing is cruel are completely wrong, it is handing them a stick to beat the sport with by offering them the chance to record footage of a tail being yanked and then spread it via social media.

I have spent far too much of my life watching horses being loaded into starting stalls, and for the vast majority of those years the process took place without any riders feeling the need to grab their horse by the tail and pull it towards them.

So perhaps the BHA or the PJA, or both, could make it clear to jockeys that this is not a legitimate way of getting horses to enter the boxes.

FIRST PUBLISHED 8:10PM, AUG 26 2020
You are failing to fulfil the prime purpose of a co-commentator, which is to tell us not what happened but why it happened