Bruce Millington: Chelsea have the pieces in place to figure in the title race 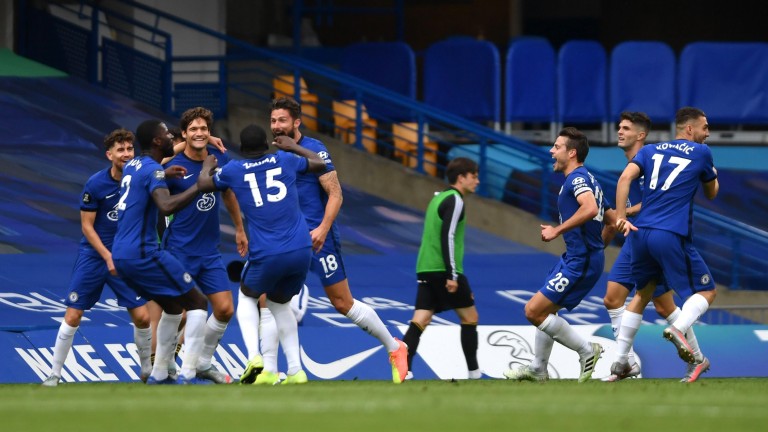 It's back after a break that seemed even shorter than 48 days, with the grounds still empty and pesky VA… oh no, hang on, I promised not to mention that again. Anyway, lovely though it would have been to have the stands crammed with fans, we are where we were during that strange summer blast of Premier League post-lockdown action.

Having had a few games to try to get a feel of what might happen, here are some early thoughts and predictions for the 2020-21 season…

Blue is the colour

The value bet for the title has to be Chelsea, who have taken expensive but excellent steps to give themselves a great chance of winning the Prem for the sixth time in 17 seasons.

In Timo Werner they now have the world-class striker they need, and when they recruit a goalkeeper who is an upgrade on the disastrous Kepa Arrizabalaga, which gives them roughly 75 per cent of the world’s professional cats to choose from, they will be a jigsaw with no missing pieces.

Liverpool are a more appealing price than Manchester City, but I have a nagging feeling they are going to regress to an extent that makes them vulnerable.

It is worth remembering they won eight, drew two and lost five of their last 15 matches in all competitions last season, a spell which straddled the coronavirus pause, so it is simply not the case they are still an invincible winning machine, and their defending against Leeds on Saturday was far sloppier than we have become used to.

I’d still back them to finish above City, though. This myth of a great team are grotesquely short at odds-on and until they start awarding points for style rather than the act of putting the ball in the opposition net more often than they put it in yours I shall swerve them.

They make me swoon at times and there is no side I would rather watch if I wanted to see how beautifully football can be played in England, but they continue to strike me as a soft touch.

They can of course win - it would be a sin if a club so rich were not serious candidates  - but I am happy to lay them at shorter than evens.

Manchester United are probably a superstar signing short of being genuine title challengers but there is still time for that key recruitment to be made.

I refuse to take seriously the insultingly inaccurate transfer speculation the media continue to peddle, but Jack Grealish is officially going nowhere so it remains to be seen whether United are prepared to pay a nine-figure sum for Jadon Sancho or fancy giving Gareth Bale a whirl.

Arsenal look progressive under Mikel Arteta but they lack the basic quality and depth to make the top three, although they should give United and City a run for their money as far as the top four goes.

The end of the big six

People still refer to the big six but there is now no such thing. Tottenham are inferior to the other five members of the group and are now broadly the equivalent of Wolves and Leicester.

Jose Mourinho was a poor appointment and if they were an item in your fridge you’d be looking at the date on the label to see just when they are due to go off.

It won’t be long. Poor old Harry Kane’s injury problems mean his glory days are surely behind him, Dele Alli is in the doldrums, and there is a general absence of pace and sparkle to Spurs.

Still, the demise will make for sensational viewing when they release the second series of the Amazon Prime documentary that benefits so richly from Mourinho’s presence in the dugout.

Leicester, on the other hand, are not deteriorating as much as the market and many experts think. Their summer form was poor but they had legitimate excuses with a clutch of injuries to key players, and I shall be keeping the Foxes onside.

I keep falling for Everton and after they made some astute appointments and opened up with a win at the Lane I am in danger of doing so again, especially as I have a hunch they might be wise enough to snap up Wilf Zaha, who would be a perfect adornment to the building work that has been done in recent weeks.

Two irrelevant things about Everton: 1) They win the best of the new kits award with their gorgeous Hummel number, with Leicester’s maroon third kit taking silver. 2) If Dominic Calvert-Lewin wants a media career after football he’s got it. The first time I heard a young Gary Neville being interviewed I knew he’d be a superb pundit and I felt the same hearing the Everton striker talking so eloquently at the weekend.

Panic on the streets of Stratford

When it comes to radio phone-ins West Ham’s possession stats are truly extraordinary. One of the least interesting clubs in the Premier League continually dominate the chatter on the airwaves, not least during the early stages of the new season.

The plot line of football's version of EastEnders is pretty weak - captain tweets to express disappointment that little-known player was sold to West Brom, then team lose first game - but that doesn’t stop a long queue of Cockneys inundating the Talksport switchboard to sing yet another chorus of Sullivan and Gold must go.

The reality, I suspect, is that these seething supporters will be playing happy renditions of Knees Up Mother Brown on the spoons before too long because the team and the manager are easily good enough to banish relegation fears, and I might even have a little dabble on them for a top-ten finish.

What goes up must come down

If you support Fulham or West Brom the opening skirmishes must have left you feeling concerned - and rightly so.

Both kicked off with a 3-0 home defeat, and neither performance offered much evidence that this will be anything other than a stressful season. I foresee both being relegated, with Aston Villa the likeliest side to complete the three descenders.

It is great for them that Grealish has signed a new deal, as well as a terrible indictment of the recruiting policies of the biggest clubs in Europe because he is properly world class, but Villa only just survived with him last term and even some pretty lavish recent spending might not help them avoid another intense battle to stay up this time.

Gallagher a solid signing for BT

The best transfers are always the ones that no newspaper managed to suss out or guess at before they are announced, and so it was that Dermot Gallagher, or rather the voice of Dermot Gallagher, popped up during BT Sport’s first live match transmission of the new campaign.

It would be fair to say the channel has bigger priorities when it comes to replacing existing broadcasters, but nonetheless Gallagher is an upgrade on Peter Walton.

Then again, I can’t actually find any confirmation that it is a like-for-like swap. Given how they would throw to Walton so often last season that he ended up narrating my dreams, I cannot believe they are prepared to let him go completely.

Perhaps they feel the need to expand their ex-refs cadre so that every single mildly contentious decision can be pointlessly commented upon by someone whose opinion is of no greater validity than the average viewer’s.

Of all the former arbiters who have taken the media shilling to rat on their former colleagues Gallagher is actually by far the best, simply because he is fair and consistently tries to point out how difficult it can be for the on-field official, whereas some of the others in this murky profession cannot contain their glee when they see a ref has got something wrong.

All in all, though, I would be quite happy for sport broadcasters to focus less on what the referees do and instead comment on the influence the players and managers have on matches.

Due to the inevitable financial hardship the coronavirus disruption will cause, and the difficulty of pinpointing exactly which teams will be affected, I am doing far less ante-post betting on the lower divisions than normal this time.

However, I’m having difficulty understanding why Bournemouth are as big as 10-1 to win the Sky Bet Championship.

They finished 13 points ahead of Norwich last season but are double the odds of the Canaries and, while undoubtedly weaker this term due to the sale of some of their best players, there is still plenty of quality and depth to the Cherries’ squad and it is a mystery why the market is so down on them.

FIRST PUBLISHED 6:00PM, SEP 16 2020
I keep falling for Everton and after they made some astute appointments and opened up with a win at the Lane I am in danger of doing so again