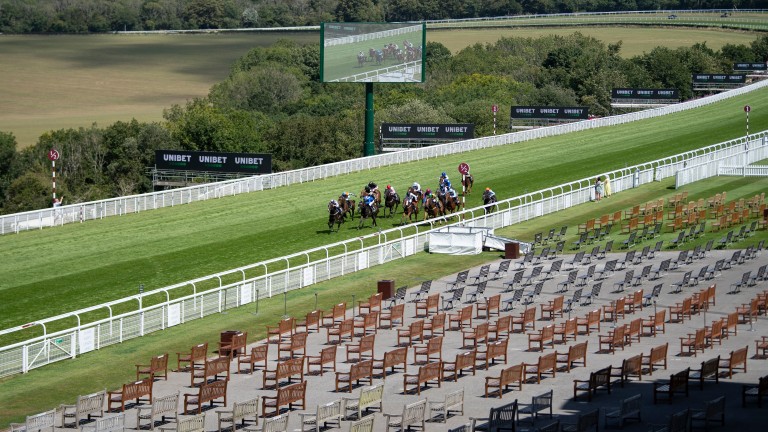 Selfishness is an unpleasant characteristic but it is also a slightly enviable one. How nice, in a shallow sense, it would be to look at what is happening in the world and not have it in you to care about the relentless tragedy and torment of the global effects of coronavirus on the basis that one's own life is going pretty well thank you very much.

As it happens, these past few days have indeed been quite nice thank you very much. On Saturday, for instance, I watched live football for the first time since Palace beat Watford 1-0. That was in March but it seems so long ago the winner could easily have been scored by Dave Swindlehurst rather than Jordan Ayew.

Under a sizzling September sun I joined 364 others in witnessing Corinthian Casuals lose 2-1 at home to Haringey Borough. It was lovely and a reminder that I have neglected non-league football for far too much of my life.

You could wander right around the ground to pick your vantage point, it was fine to sup a pint as the action unfolded and the game itself was of a pleasingly high standard.

I particularly enjoyed the Borough fans‘ rendition, to the tune of Tom Robinson’s Glad To Be Gay, of “Sing if you’re Haringey, sing if you’re happy that way,” but was less impressed by a small group of home fans, who appeared to be actual adults, chant to the visiting supporters “You’ve had your day out, now f*** off home”, although their feeble little outburst did not tarnish what was a tremendous afternoon.

Three days later my daughter kindly allowed me to join her at Thorpe Park, a superb theme park despite its rather modest name - memo to their marketing team: how about changing it to Fantasy Island or something?

The location is operating with a reduced capacity of 2,000, which meant nice short queues but still did not prevent reasonably close proximity to lots of folk, albeit everyone was being perfectly sensible.

But super sun-kissed days out like those cannot mask the dark clouds that hang over the bigger picture, as Covid continues to distort our lives so worryingly.

Individuals may claim they are content that their lives can function just fine despite the various restrictions that are imposed upon us, but you would have to be particularly insular not to have the slightest concern for the wider society.

The announcement on Tuesday of a new range of measures imposed in a bid to slow down the resurgent virus has particularly serious implications for UK sport and when you contemplate where we might be at the end of the proposed six-month period for which the new rules are due to apply it is frankly scary.

The structure of professional football in England, which has somehow remained intact for over a century, could finally crumble as clubs starved of turnstile income fold in their droves.

It is not flippant to suggest you could back a League Two team to make the play-offs and finish in the bottom two and get paid out on both bets.

Drastic action, over and above whatever Government support is made available, will surely be needed to protect the pyramid until it is deemed safe to get fans back into grounds in significant numbers, and hopefully that will involve a temporary redistribution of the vast TV revenues.

While Gareth Bale can earn £600,000 a week - and I don’t hold that against him at all - there is scope to take the huge sums people pay to subscribe to Sky and BT and, for one season, spread it down the ladder so that when we emerge from this hideous situation, we still have a recognisable shape to the sport in this country.

Racing’s predicament is even more perilous. While it is a relief that pandemic insurance has provided a certain degree of insulation, there is no doubt the ability of the sport to survive in its current form without crowds is in acute danger.

And while you can rightly claim it is less important that Mansfield versus Walsall remains a fixture and that they can still race at Plumpton than that we stave off the threat of rising levels of child poverty, it is still vital that sport is protected as much as possible.

Racing will not be high up the public’s list of urgent industries to keep afloat, but that does not mean its future prosperity is unimportant. It is, after all, a major source of rural employment.

And it is hoped its leaders can get its case across to the Government as soon as possible because the ban on people attending meetings does not seem necessary or indeed fair.

Details of my visits to Corinthian Casuals and Thorpe Park were not provided to let you know what a lovely time I’ve been having lately. If 365 people can mingle at a non-league football ground and 2,000 can enjoy a day ambling around a theme park there is no reason why racecourses cannot welcome back spectators.

Even more compellingly, shopping centres are visited by many thousands of people every day without any meaningful restrictions and pubs, although now subject to a mysterious 10pm closure (I must have missed the bit where scientists proved the virus stops infecting people thereafter), are still able to open their doors.

Let’s focus specifically on pubs. There are roughly 40,000 of them in the UK. If each is visited by 25 people a day, which I’d say is a conservative estimate, that’s a million daily pub visits, or 365 million a year.

Six million people a year go racing, so why are they not allowed to when so many more pub visits are deemed fine?

Clearly the Government cannot, in these exceptionally challenging times, create perfect fairness across the board. But the BHA must make the point that its six million annual visits are far less likely to spread the virus than the opening of pubs will, especially as racing crowds are able to spread out on all but the biggest days and spend far more time outdoors than people do in bars.

While people are still paying seven-figure sums for unraced horses and off-course betting remains as popular as ever there clearly remains decent money circulating through the sport’s plumbing, and, as with football, that needs to be directed to where it is most urgently required to protect the sport from excessive damage.

But the Government needs to be educated that it is safe to allow spectators back into racecourses so that many thousands of people avoid having their livelihoods unnecessarily ruined by a spectator ban that is anomalous with so many other areas of UK life and industry.

Cases of Covid are rising, as the mainstream media in their desire to focus on the negatives keep telling us. They are less quick to point to that deaths and hospitalisations are far lower than they were first time around, so we need to remain mindful of the need to balance the health of the population with minimising economic damage that can create a whole new range of physical and mental health issues.

And in announcing a six-month ban on spectators at sporting events, it feels like sport as a whole, and racing in particular, is being unnecessarily harmed.

Transfer tittle-tattle lacks substance but we would certainly miss it

However disdainful some of us might be about the general validity of transfer stories, it is still possible to fall for what has to be the least reliable form of journalism of all.

I try to stand by my rule that until a player emerges from the tunnel five minutes before kick-off in a new kit he has not signed for the team that wears that kit.

But I still see tweets and web stories saying Club X is going to sign Player Y and like a gullible oaf rush to pass it on to relevant friends, only to be reminded months later what a clown I am as Player X, having stayed put, scores the winner against Club X.

Standard journalistic principles are, and have for decades, been jettisoned when it comes to the silly business of reporting possible transfers as journalists flagrantly throw truth and facts in the bin.

So it was fascinating to see a media organisation get called out by a club this week. Sky Sports tweeted that Crystal Palace had made a formal bid of £19 million plus add-ons for Liverpool striker Rhian Brewster.

That prompted Eagles chairman Steve Parish to get the tweet, which he described as a total fabrication, deleted, only for Sky to come back with a watered down version which claimed Palace were “prepared to pay £19 million for Brewster”.

Why indeed? Transfer stories should be subjected to the same levels of integrity as all other types of journalism, yet while there are a few genuinely good scoops during every transfer window the vast majority of speculation and title-tattle turns to nothing.

I suspect, though, that if it was a requirement that all such stories had to be properly verified the majority of us would actually miss this guilty pleasure.