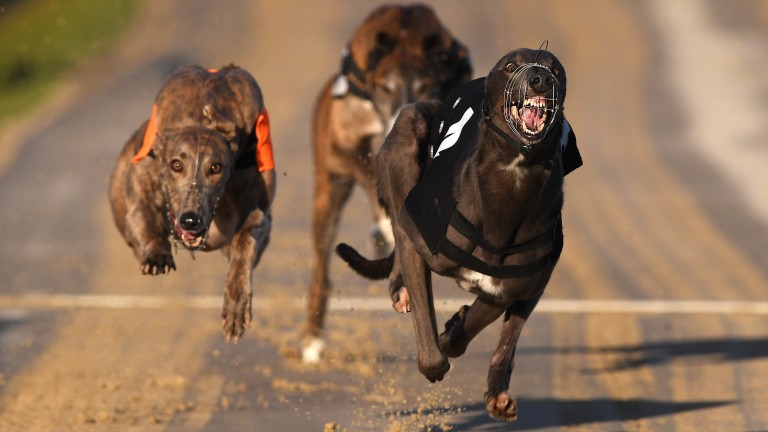 Greyhound racing has kept the show on the road during the coronavirus pandemic
Mike Hewitt
1 of 1
UPDATED 1:11PM, MAR 21 2020

It has been the most peculiar time of most of our lives. In a single crazy week the world has changed more drastically than I have ever known it to.

Here is the diary of a sports fan, punter and worrier:

Cheltenham is still going despite most other sports having pulled the plug for now. Sensible or reckless? Time will tell but from a selfish perspective it’s good that a cracking card goes ahead largely without a hitch.

I say largely because as a panellist on the new Racing Post Live show - think Gogglebox meets Soccer Saturday - I can’t stop myself reacting to Goshen’s incredible last-flight fall with a loud “Ohhhhh, f*******k”.

In my defence his mishap cost me thousands of pounds but I am relieved when the reaction from the company is to put a clip of it on YouTube rather than frogmarch me to the HR director and thrust a P45 into my hand.

Cheltenham is a hugely brilliant week. The track, horses, jockeys and stable staff have laid on a fantastic show and there are numerous sensational finishes to look back on with warmth.

It is interesting to note, however, that Twitter’s vibrant and vocal racing community seems to suddenly take Coronavirus significantly more seriously from about 5.38pm. Can’t think why.

The show limps on. Racing is digging in determinedly even if there is no football and not much else besides.

Having enjoyed an unusually good punting week at Cheltenham the decision to play a forward defensive in the coming days rather than charge down the wicket in a bid to play up my winnings is made far easier by the more limited punting menu than one would customarily expect at this time of year.

I manage to back a few losers at Uttoxeter just to give myself that comforting feeling that life still has some normality to it but it’s the quietest betting Saturday I have had in ages.

While keeping it firmly in the context of so many people around the world suffering tragedy, I begin to get concerned for my ante-post bets.

I have Leicester for fortunes in a variety of wagers, most notably top four, top six and without the big six, and my lumpy Jamie Vardy Golden Boot punt has come back to life after his two recent goals against Villa, but it feels like the quest to complete the season has become increasingly challenging.

This is traditionally one of the hardest days of the year on which to watch sport, because when you’ve spent all week worshipping at the altar of the festival the rest of the family actually wants some of your attention for once so time on the sofa with remote in hand is severely limited.

But with virtually no sport to watch that problem is solved, although I can’t even claim I am willingly sacrificing the chance to watch loads of great action because everyone knows there is nothing on.

It’s a particular shame the Players Championship lasted only 18 holes because the final round at Sawgrass is an annual favourite, but then I think back to how badly the three blokes I backed started and I comfort myself that a refund constituted a proper slice of good luck.

With the threat to racing continuing I feel it only polite to have a few wagers but, without being too costly, it turns out to be unwise.

I awake to discover there is some sport on that does not involve creatures with four legs. Netball is actually something I claim to know a little bit about, even though I cannot recall how I got into it.

It’s an excellent sport to watch and if you can build a knowledge base on something this obscure you have a decent chance of showing a small profit because bookmakers do not employ vast teams of netball experts.

Anyway, Southern Steel are playing Bay Of Plenty in New Zealand and based on first-half scoring patterns I have a stab at under 102.5 points, which somehow clicks even though I had only three points in hand with nearly three minutes remaining.

A few uneventful racing bets help the afternoon pass a little quicker and then it’s time for the first of Boris Johnson’s daily briefings.

His vague advice not to visit pubs, cinemas, restaurants and the like as well as the repeated urgings to wash our hands thoroughly do little to quell the growing sense of anxiety among the nation and it is impossible to escape the feeling that this crisis is going to pan out at the upper end of and beyond everyone’s expectations.

I go for a walk as part of a vow to stay healthy so that if I have to fight this virus I am in the best - or more likely least bad - possible shape to do so.

On the way through the fields my phone pings to reveal the news racing has been halted and that the afternoon cards at Taunton and Wetherby will be the last in Britain for the time being.

It’s not a huge shock but as I continue through the countryside it feels increasingly like a questionable decision.

Sure, the direction of travel is not encouraging but the here and now does not seem so bad that the show could not continue on the understanding that it could be halted at any given moment.

Using private ambulances and medical teams would ensure there was no drain on the health service and if the spread of the virus continued to the extent that it was no longer justifiable to use emergency vehicles to follow horses around a track the sport could stop at that point but we were not near that situation yet.

With spectators having been prevented from going racing as of the previous day there would be a small number of people at each meeting, all capable of keeping a safe distance apart, and the continuation of racing would give people stuck at home some welcome entertainment and racing’s revenue would not dry up.

Looking back, I wonder if the jittery mood of the nation at the time was a factor. Hours later, an assured performance from Chancellor Sunak helped to calm people slightly, but by then racing’s plug was out of the socket and lying on the carpet.

No racing, no football, no nothing, so no bets. Children were still congregating in halls to sing songs and be reminded not to smoke behind the science block, and tube platforms were still heaving with sweaty commuters, but it was deemed unsafe for a few dozen fit folk to gather in a rural location to lay on a race meeting.

At least the Irish authorities had announced its intention to keep racing, albeit with a reduced fixture list, meaning it was possible to enjoy a bet on some reasonably familiar sport without needing to take the plunge and try to get to grips with the South African form book.

Actually, I did have a couple of punts in the evening thanks to the greyhound industry’s willingness to keep the show on the road.

Let’s hear it for the dogs and the fine folk who train, own and look after them. This wonderful sport has fallen on hard times in recent years but is a tremendous betting medium and a bloody excellent sport. When this is all over I will go dog racing more often.

There are live canine contests every night on Racing Post Greyhound TV on channel 175 and long may that continue.

As the crisis carries on down its uncertain, destructive path, it feels like people are showing their true colours. The nice are showing just how nice they are and the selfish are exposing their deeply unpleasant side.

But while we’ve all been horrified at videos of lamentable morons bulk-buying everything from Fairy Liquid to cuckoo clocks, the acts of kindness are providing much-needed reminders that humans are actually not bad.

A chap pushes a leaflet through the letterbox. It says at the top Coronavirus Aid and has his contact details and an offer to help anyone who has to live in isolation and has no other way of getting food and other supplies.

Meanwhile, a friend reports seeing a woman give the only box of eggs in her trolley to a forlorn old man who was staring at an empty shelf.

But then there is another jolting illustration that the world can be a desperately sad place with the news Peter Whittingham has died aged just 35.

I had been an avid follower of the former Cardiff midfielder for many years, largely because whenever he lined up against Palace he was always such a classy, dangerous player.

And while trawling through the tributes on Twitter it’s remarkable how many fans of other clubs make the point that he always seemed to play well against them, which basically shows he was simply a brilliant footballer.

All in all, it’s been a weird and not remotely wonderful week. It is impossible to know where we go from here. Do we enter full-on lockdown in a bid to contain the virus and get to the place where China appears to have finally reached whereby new infections are massively reduced?

Will death rates spiral? Or will we put into place more rigid measures to protect the old and the vulnerable while the rest of the working population try to get the economy back on track?

Nobody knows and there’s no point guessing. Let’s just hope for the best and try to be kind to each other. And even when we are bored let’s remember to bet safely.