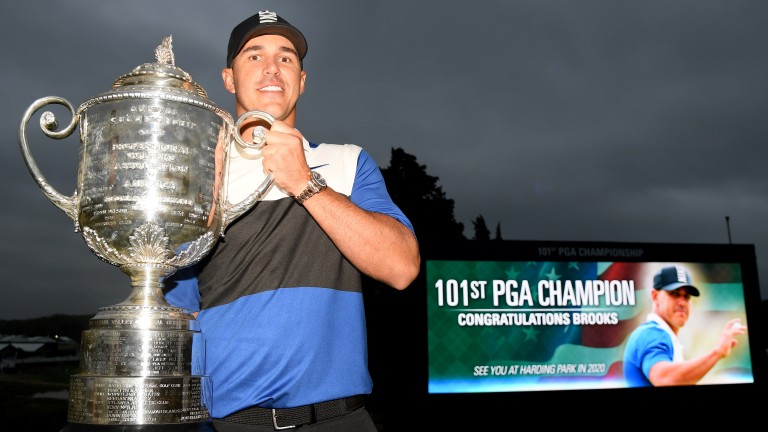 US PGA champion Brooks Koepka has another trophy in his sights
Ross Kinnaird
1 of 1
By Steve Palmer UPDATED 10:02AM, JUL 28 2019

Story so far
Rory McIlroy and Brooks Koepka impressed in round three of the WGC-FedEx St Jude Invitational to force their way into the final pairing at TPC Southwind, setting up the possibility of a thrilling Sunday duel.

Halfway pacesetter Matthew Fitzpatrick is only two shots behind, while Jon Rahm headlines a trio a further shot adrift, but McIlroy and Koepka are first and second, and understandably dominating the outright betting.

McIlroy, who closed with three consecutive birdies to complete a third-round 62, leads by one shot and the pre-tournament 10-1 chance has become 6-5 favourite. Koepka, who found 17 greens in regulation in a rock-solid Saturday 64, is 9-4 for glory in Memphis having been 11-1 ante-post.

Dustin Johnson, a two-time Southwind champion who topped the betting before the off, shares 26th place, nine shots behind, and needs a miracle if he is to complete a hat-trick of St Jude titles.

Final-round advice
Rory McIlroy has a strong record of bouncing back from missed cuts – and two of his last four starts after cut failures have resulted in victory – but the Open Championship at Royal Portrush was not just any old missed cut.

McIlroy was crestfallen to miss the cut in the first Open he has played in his home country and he has done well to refocus and motivate himself so quickly afterwards. Getting into contention is only half the battle though – and the easiest half – and keeping his composure to finish the job is the challenging mission facing him today.

McIlroy's mental strength has been greatly called into question since his first-round 79 at Portrush and he knows an intense spotlight falls on him again as he bids to defend a Sunday lead in Memphis. This feels like a much bigger deal than a standard WGC for Rory – such was the magnitude of the disappointment and soul-searching of last week – and it is not going too far to say that victory could have a huge impact on the rest of his career.

There has been plenty of fighting talk from McIlroy since the Open – about being more determined than ever to honour the fans who were so good to him at Portrush – and he is looking to immediately back up those words with a significant trophy.

There is obviously an added pressure which accompanies such comment, though, and letting this chance slip, then going months without any success, could leave him vulnerable heading into the next set of Majors. If McIlroy is going to rid himself of his Portrush demons, the sense is it must happen sooner rather than later.

With equally nervous opposition, the class of McIlroy would probably be enough for him to get over the line, but it is a dagger in the heart for the Northern Irishman, and his trusty band of followers, that Brooks Koepka is only one shot behind. A final-round pairing with anyone else in the field and McIlroy would approach the first tee with confidence. But Koepka, who has won four Majors since June, 2017, has a considerable psychological edge. McIlroy has not won a Major since August, 2014, and has had to suffer watching Koepka become the king of the sport.

Throw in the fact McIlroy led at TPC Southwind on the 72nd tee in 2012 before hooking a drive into water, carding a double-bogey to finish seventh, and the mental challenges ahead for the leader are immense.

It is a positive for McIlroy that Koepka is still not entirely comfortable with putter in hand – the Floridian missed a short par putt on the 13th hole in round three – and that his chief pursuer has had the sniffles at times this week and not seemed 100 percent healthy. But 9-4 Koepka still looks enormous in comparison to 6-5 McIlroy, given the suspected levels of self-belief that each will carry to the opening hole. Koepka found 17 greens in regulation in round three and seems unlikely to make many tee-to-green errors.

Jon Rahm could prove the fly in the ointment – the Spaniard birdied his final hole of round three to move menacingly close to the lead – but punters with a serious wager on either of the front two are entitlted to be mulling over a cover shot on the other. Koepka was Racing Post Sport's ante-post headline selection at 11-1, so taking some 6-5 McIlroy may be worthwhile for cautious souls. Those yet to get involved, though, are pointed towards Koepka, who is bursting with long-game assurance and bundles of killer instinct.

Final-round twoball punters should consider Chez Reavie, Kevin Kisner and Justin Thomas. Reavie, who can boast St Jude form figures of 12-6-4 from his previous three visits, can see off Tyrrell Hatton in their 5.20pm meeting. Hatton was putting with his wedge over the closing holes of round three, his putting frustrations having clearly boiled over.

Kisner was seemingly rattled early on from playing alongside Patrick Reed, a man he has gone on record as hating, and a first-round 77 left him tailed off. Kisner has settled into the event, though, fighting his way back from seven over par to level, and the WGC-Match Play champ can finish strongly at 3.40pm and leave Eddie Pepperell behind.

Thomas has been swinging well over the last few weeks and should prove too steady from tee to green for Bubba Watson in their 6.10pm contest. A sunny, calm Sunday is forecast.