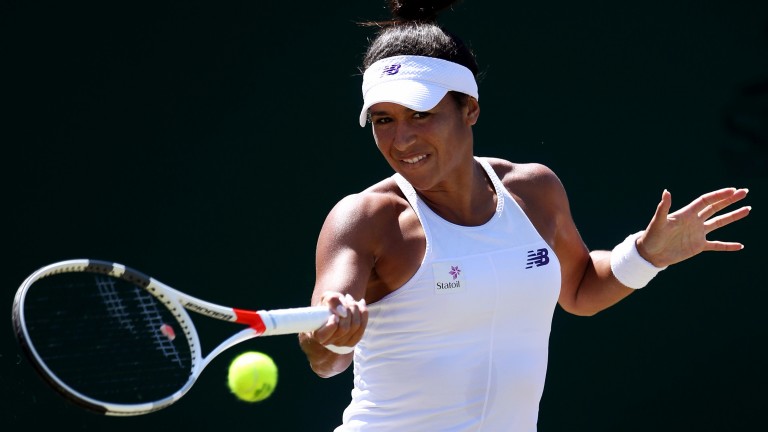 1 Heather Watson is good enough to win a Grand Slam

Heather Watson doesn’t often produce the goods, but when she does she’s a blindingly good performer who looks decent enough to win a Grand Slam.

The problem has been deciding which Slam, because she has the talent to go all the way in New York as well as Wimbledon. Melbourne is also an option but the heat could count against her there.

The Guernsey native has been backed at highs of 250-1 with bookmakers offering each-way betting and 630 on Betfair’s exchange.

But after victories in south-set London over Maryna Zanevska and, yesterday, Majorca champion and 18th seed Anastasija Sevastova, there’s a feeling that Hev could be the first British winner at Wimbledon since Virginia Wade.

Next up for Watson is a crack at two-time Australian Open champion Victoria Azarenka, who prior to going to Wimbledon had played only two matches since returning from having her first child.

Last month’s Edgbaston final produced a three-set thriller between Johanna Konta and Donna Vekic and it was a similar story at Wimbledon yesterday, when Konta avenged her Priory Club defeat to the Croat when winning 7-6 4-6 10-8.

All credit to Konta, too, for finding a way to win because Vekic is a tough cookie and the Brit had to fight back from 0-30 on her serve on a number of occasions.

Konta’s reward is an easier-looking clash on paper with Greek 21-year-old Maria Sakkari, while it will be interesting to see if grass-lover Vekic continues to produce the goods on the US hardcourts.

As for Konta’s title chances there is plenty of fire in her belly, but there’s also a suspicion that the Eastbourne resident is better suited to hard courts and that the Australian and, especially, the US Open could afford her a better chance of taking Grand Slam glory.

Jonas Bjorkman, who has tightened up Marin Cilic’s serve for the grass season, will have been concerned when Florian Mayer went a break up in their opening set.

But Cilic did well to break back and, from that early scare onwards, stave off a difficult opener to win 7-6 6-4 7-5.

Things will obviously get a lot tougher for the Croat, who found only Feliciano Lopez too good at the Queen’s Club. But so far in their relationship, Cilic is doing everything his coach, a Wimbledon semi-finalist in 2006, asks of him.