Derision of Dean is totally uncalled for 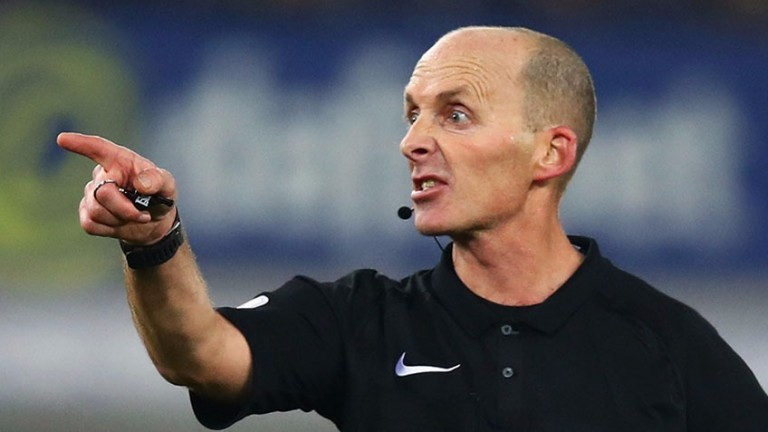 What percentage of the things you learned at school do you actually find useful in your adult life? Percentages, hopefully, otherwise you won’t be able to answer. But what about the other stuff?

I can still remember how an oxbow lake is formed, what Na stands for in the periodic table, that the French for deaf is sourd and if that if you inadvertently used a chisel as a screwdriver in design and technology the sadist who taught us gave you a nasty slap across your hand with a metal ruler.

But not one of those pieces of information has proved remotely useful to me since I left school, as is the case with the majority of what was scrawled on the blackboards.

I might, however, dust off the old Venn diagram and do one that shows the relationship between people who use the phrase “it’s all about him” in relation to Mike Dean and people I would want to have a drink with.

I suspect the bit in the middle containing people who use that tiresome phrase in connection with the Premier League referee and are actually worth socialising with is absolutely tiny.

It has become monumentally tiresome to see the near universal assassination of Dean’s professional ability and personality in recent weeks, and now it’s time someone said enough is enough and stood up for the poor bloke.

The abuse and ridicule he receives from managers, the media and Twitter halfwits is irritating, unfair and wildly excessive. He is an excellent referee, one of many great arbiters who grace the Premier League.

He is bold in his interpretation of the laws of the game, makes his decisions clearly and demonstratively and has years of experience, having refereed Premier League matches since 2000 and spent ten years as a Fifa official.

Of all the significant problems football has, the standard of refereeing is not among them. Indeed not only is it not a problem, it is an asset as far as the top division is concerned. Standards are supremely high and any attempts to introduce video replays to improve accuracy would only nudge the amount of correct decisions up from around 97 to 98 per cent, so it would clearly not be worth killing the tempo of matches.

The only problem with referees is people’s intolerance of any mistakes they make, even though everyone makes mistakes.

Dean is currently the imbeciles’ target of choice because he, like everyone in the world, is unable to achieve perfection in his job and because he tends to signal his decisions in a more theatrical manner than his colleagues.

I have no problem with his methods. Unlike cricket umpire Billy Bowden he does not appear to be trying too hard to be some sort of ‘character’, and he gets derided even though he shows the same clear authority that makes Nigel Owens such a respected rugby ref. I don’t understand it.

Dean is the person who has the courage to follow reminders and directives even when he knows they are not going to please fans, players or managers. For example, referees were told in the summer to clamp down on jostling in the area before corners were taken, so he more than any other whistler was prepared to give penalties when it happened.

After Wilfried Zaha was nearly cut in half by Marcos Rojo last month refs were reminded not to allow players to stay on the pitch when they tackled opponents so recklessly, so on Monday he expelled West Ham’s Sofiane Feghouli after he had stupidly and dangerously jumped in on Manchester United’s Phil Jones.

The uproar that followed that decision was unacceptable, with managers, the media, former players and, most appallingly of all, former refs, lambasting Dean.

It is thoroughly depressing that all these critics forget the man in the middle has only one look at such incidents and make no allowance for the fact they are taking place at high speed and are, in many cases, extremely hard to judge properly even when you have had the benefit of an array of replays.

It is deeply unfair to Dean to say he made a bad decision with the naked eye, even though the red card was rescinded yesterday.

And why was there no criticism of the player himself? Feghouli created the situation with a pathetically poor first touch that set up the collision with Jones and then did himself no favours by leaping in with both feet outstretched in front of him. If you do that you are asking for trouble.

The really foolish aspect of the furore, which gets trotted out a lot, is that pulling out a red card so early in a match ruins it as a spectacle.

So what should the ref do? Start off being lenient and then crank up the intolerance of transgressions as the clock ticks on? If you shoot someone at dawn you should get the same sentence as a midnight gunman.

There is one area in which referees are not helping themselves, and that is the application of the directive relating to abuse that comes their way from players.

It started off fine back in August with players receiving cards for swearing at refs and linesmen, but, as predicted in this column, things gradually returned to normal and it is now a dismally common sight to see a player let fly with a volley of abuse and go unpunished.

But then when the whole football world is slagging you off, as seems to be the case right now, perhaps it is understandable that the arbiters wonder why they should single out just the players for retribution.

Quite how we solve this hideous situation I am not sure, but it would certainly do no harm for educating people how hard refereeing is and what a great job the Premier League officials do to become part of the school curriculum.

Who will win the pictures poker?

There will be no British racing shown in the majority of British betting shops on Tuesday unless some deals are done urgently.

The shop rights to six racecourses are now being sold by the newly-formed Racing Partnership, and Ladbrokes-Coral and Betfred have chosen not to sign up.

As luck would have it, the three scheduled meetings on Tuesday – Lingfield, Southwell and Wolverhampton – are all TRP tracks.

So unless peace breaks out pronto, if you walk into any of the outlets carrying the Betfred, Coral or Ladbrokes livery – some 60 per cent of all betting shops – you will not see any racing.

It has been interesting to speak to people who have been in shops when races at Southwell have not been broadcast. One person said there were mutterings of unhappiness, while another said he and a few fellow customers watched it on their mobiles.

Clearly the racing industry needs ire rather than apathy to be the overriding emotion from punters who want to watch and bet on British racing.

Because if not, the operators will start to believe they can live without live pictures and save themselves a tidy sum.

The formbook suggests this stand-off is classic posturing and that an agreement will be signed sooner or later, but the implications for the sport if people decide an off-tube commentary will suffice are extremely serious.

You lot are a tough audience, aren’t you? Six of seven letters carried in the Racing Post yesterday were critical of ITV Racing’s first stab on Sunday, while one was supportive.

We need to see more before being able to form definite opinions about the show, but for my money there were some encouraging signs.

The big issue was the decision to stick with the pledge to broadcast from the paddock rather than a studio even though pouring rain and bitter cold made conditions as testing as can be.

If they can survive that, which they just about did despite the camera lenses getting covered in raindrops, they can probably survive anything, and it will be good to see what happens when the weather is kinder.

Ed Chamberlin was excellent, Luke Harvey showed why he could well be the surprise package, Sir Anthony McCoy appeared far more engaged than when on Channel 4 duty, and the increased interaction with commentator Richard Hoiles, both before and during races, was a positive. I didn’t mind the graphics but enough people did to suggest they need to tweak those, and it is to be hoped that however wet it gets in future they don’t treat viewers to shots of lenses being wiped dry.

If I was to suggest one thing they need to do above all others before the next show, it would be to sit Matt Chapman down and tell him not to try to make a massive impact every single time they throw to him.

His natural energy and enthusiasm will work just fine in the long run. There are times for having a laugh and times to just calmly give us the prices and the market moves.

And attempted jokes about people’s weight and baldness are neither funny nor clever, given many viewers will be wider and less hairy than they would like to be and don’t need reminding of it.

All in all, it was a decent start by ITV and it will be fascinating to see how the coverage evolves in the coming weeks before the big test in March.