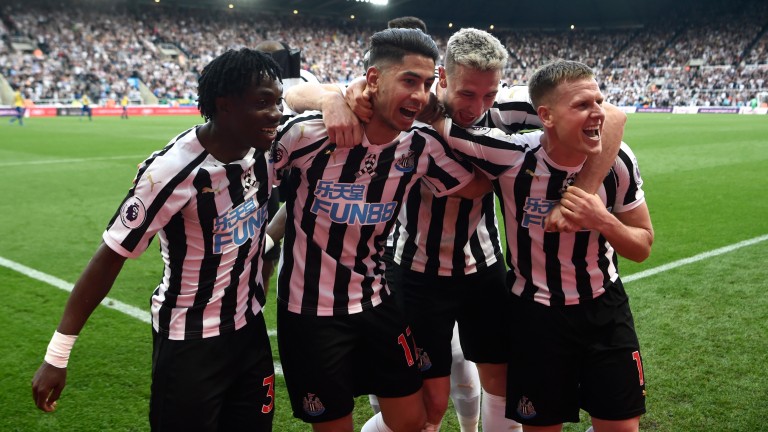 Draws have been rare in the Premier League recently but if one fixture this weekend has a stalemate feel to it, it’s the showdown at the Amex between Brighton and Newcastle.

Some bookmakers are offering the draw as short as 21-10 and it’s easy to see why. Neither of these teams are in the bottom three but when it comes to goals Brighton and Newcastle are struggling.

Albion’s supporters haven’t seen their side find the net in their last seven games while the Toon Army have seen just 13 Newcastle goals in 17 away games.

All the ingredients for a low-scorer are there and under 2.5 goals is no bigger than 4-7.

Brighton go into the contest nursing wounds from their gut-wrenching 1-0 loss at Tottenham on Tuesday while Newcastle are feeling far more perky having had a week off since beating Southampton 3-1.

That win made sure of the Magpies’ top-flight survival, but by kick-off Brighton could be out of the bottom three only on goal difference if Cardiff beat relegated Fulham earlier in the day.

Whatever happens at Craven Cottage, Albion will still be under pressure and it’s a struggle to make much of a case for a team who have gone more than 11 hours without finding the net, mustered just a solitary point from their last possible 18, and scored a mere 17 home goals this season.

Newcastle just about get the nod with the draw no bet. The Magpies won’t alter their set-up – manager Rafa Benitez likes a back three with a solid two in front of them.

That adds up to a 5-4-1 against the better teams but it’s definitely a 3-4-3 against the rest with the likes of Matt Ritchie and Ayoze Perez offering a greater threat going forward.

Perez is in a rich vein of form with seven goals in his last nine games, culminating in a hat-trick in last Saturday’s 3-1 win against Southampton. That was a second victory in a week for the Magpies following their 1-0 success at Leicester.

As for Albion, ex-Newcastle chief Chris Hughton will surely have to recall bad boy Anthony Knockaert after a three-game ban. The winger at least looks a threat, unlike Pascal Gross, whose season has been blighted by injuries.

Glenn Murray hasn’t scored at home in 2019 but Florin Andone doesn’t convince as an alternative leader of the line.

Albion are where they are on merit. It isn’t just that they aren’t scoring goals, they aren’t even carving out many good chances.

If there is to be a winner, it’s more likely than usual that it will be by a single goal, hence Betway’s offer of 5-4 about a one-goal winning margin.

Team news
Brighton
Anthony Knockaert is available after a three-game ban but Davy Propper is out.

Key stat
Brighton (2.46) and Newcastle (2.26) prop up the Premier League table for total goals per game.