Brighton may not be overawed by key Red Devils clash 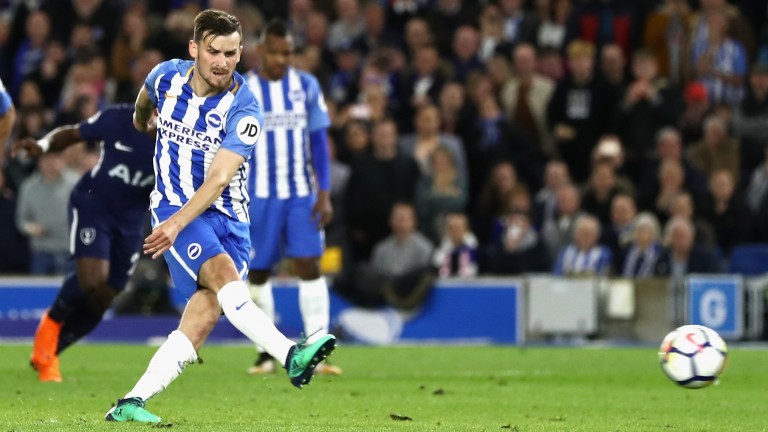 Eight of Brighton's 18 Premier League home games this season have been draws and the Seagulls would happily settle for another point against Manchester United on Friday night.

Top-flight survival is within reach for Brighton, who are five points above the drop zone with three games remaining.

But Seagulls manager Chris Hughton is fully aware of the potential pitfalls and has urged his players not to rely on other results.

In a worst-case scenario Brighton could finish the weekend just two points clear of the drop zone and their last two fixtures - away to Manchester City and Liverpool - are as tough as it gets.

Brighton should play with plenty of desire and have shown themselves to be tough nuts to crack at the Amex, where they have lost four times this season.

In their last home game they achieved a well-deserved 1-1 draw at home to Tottenham and Hughton might look at that performance as a template for success against United.

Brighton got it spot on tactically against Tottenham by denying space to key man Christian Eriksen.

They restricted Spurs to few clear-cut chances and never seriously looked like conceding after Pascal Gross had dragged them level with a 50th-minute penalty.

Brighton's centre-back pairing of Lewis Dunk and Shane Duffy have excelled this season and are the main reason the Seagulls have conceded just 47 goals, the lowest total among the bottom-half teams.

Manchester United will have to work hard for opportunities and will not be able to call on their top scorer, Romelu Lukaku, who picked up a foot injury in the 2-1 success over Arsenal last Sunday.

Substitute Marouane Fellaini was the matchwinner against the Gunners, scoring with an unconventional back header, but it was a far from a convincing performance from the Red Devils who found it difficult to break down a largely second-string Arsenal side.

United did what they often do by winning without playing well.

They need just four points from three games to seal second place and results-wise there are undeniable signs of progress compared to last season when they finished sixth with 69 points.

However, Jose Mourinho's unimaginative style of football has been hard for their supporters to digest and there will be plenty of critics lining up should United come up short in the FA Cup final against Chelsea.

Ultimately it will be events at Wembley rather than the last three league games which determine the verdict on United's campaign.

United's league performances have lacked intensity since their stunning second-half display at Manchester City and they may struggle to justify odds-on favouritism against a motivated, well-organised Brighton.

Brighton
Davy Propper is available after a three-game ban but faces a battle to dislodge Beram Kayal in midfield.

Manchester United
Sergio Romero (knee) and Romelu Lukaku (foot) are out and there are doubts over Phil Jones.

Key stat
Brighton have lost only one of their last seven home matches.