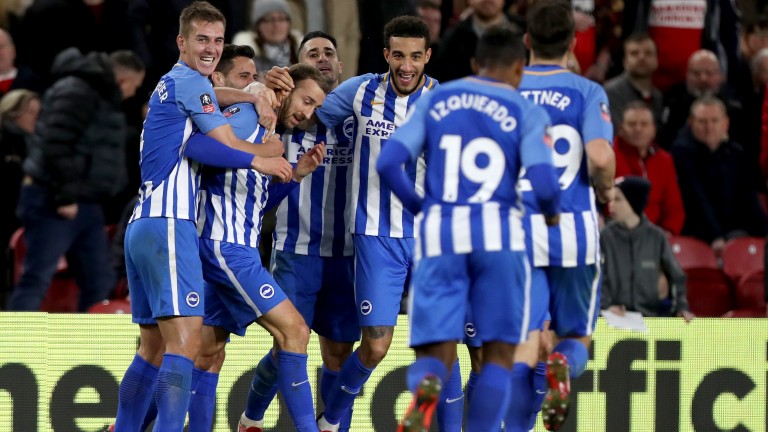 Cardiff have found wins - and goals - hard to come by, and the same goes for Brighton away from the south coast, but if one side have the tools to defy most pundits' pick of a bore-draw it looks to be the Seagulls.

Host Cardiff have failed to score in six of their 11 matches since promotion and with shooting accuracy of 26 percent are the top-flight’s most inaccurate outfit.

Brighton might be marginally more precise but from a lower base – they boast the Premier League’s fewest shots on target, just 81 in their 11 matches.

Albion have enjoyed only one league away win since this time last year – that was last month’s 1-0 triumph at Newcastle – and have failed to find the net in 12 of those 19 road trips.

This doesn’t augur well and no wonder the draw is as short as 2-1.

That Brighton are outsiders at 11-5 is perhaps more of a surprise. It may well be a game of few goals but Albion at least look like they’ve got one marksman in Glenn Murray who can find the net whereas Cardiff’s options at the top end are very hard to champion.

Murray is the top-scoring Englishman in the top flight, rubbing shoulders with Harry Kane and Raheem Sterling on the six mark, and is the kind of striker Bluebirds boss Neil Warnock would give one of his limbs for. He’s 5-1 to score the first goal, which doesn’t look too skinny - it would be hard to quibble with 5-1 that he’s the only scorer.

Warnock bemoaned failing to acquire a decent centre-forward in the summer so Danny Ward might get the nod in Kenneth Zohore’s absence. Ward’s three starts this term have been against Arsenal, Chelsea and Manchester City – it would be a tall order for anyone to make a mark against that trio but the ex-Rotherham man did at least notch against the Gunners.

Callum Paterson was the wrong choice up top against Leicester last Saturday when he barely got a look-in against Wes Morgan, and watching Cardiff pumping long balls aimlessly as the match dragged on was pretty depressing stuff.

It was, it’s generally accepted, their worst performance of the season so far and, therefore, not typical.

The weaknesses, though, are obvious and Brighton should be able to exploit them.

Harry Arter is suspended, leaving a gaping hole in central midfield, while they appear to lack any naturally right-sided players. Those are spectacular flaws in a league which is pretty unforgiving and even though Brighton are continuing to miss their safe-cracker in chief, Pascal Gross, they ought to still have enough about them to nick the points.

Cardiff haven’t kept a clean sheet in eight – even conceding two in their sole success, against Fulham – yet the sense is that this is a fixture which won’t produce a glut of goals. It's just 4-7 that there are no more than two.