Brighton and Norwich should put on a show

Pressure is off promoted Seagulls 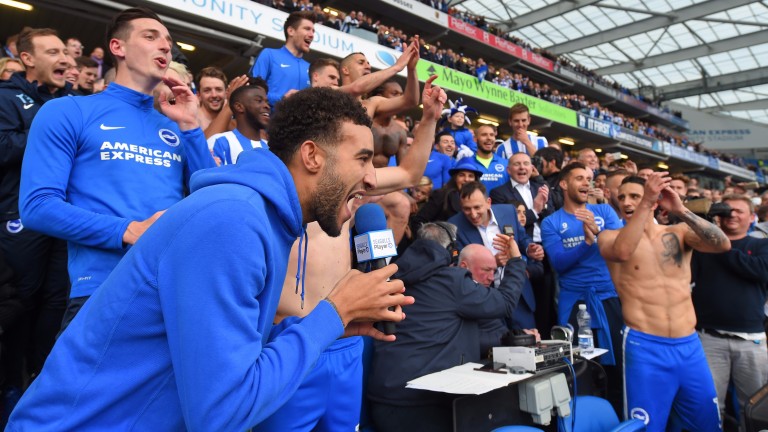 Chris Hughton, sacked by Norwich three years ago this month, returns to Carrow Road feeling very good about life after guiding Brighton to promotion – and now he's set his sights on the Sky Bet Championship title.

However, given that his hungover players doubtless spent the early part of the week incapable of setting their sights on very much at all following Monday's promotion bash, the Championship leaders won't be trusted by all punters.

Hughton has said all the right things about wanting to finish the season on top of the pile, but Brighton have achieved what they set out to do in August and are unlikely to be as focused even though victory would seal the title.

Indeed, the pressure is off the visitors and also, to a lesser extent, is off Norwich, who can no longer make the playoffs.

Given that Carrow Road has been a hotbed of goals all season long, take a chance on another high-scorer. A case for over 3.5 goals at 17-10 can definitely be argued.

The main plank of the argument is that Norwich are free-scoring, especially at home, but abject defensively.

It's a decent combination for overs betting, and any notion that they may have become more cautious under Alan Irvine couldn't be further from the truth. Their matches averaged 3.2 goals per game under Alex Neil, a figure that has soared to 3.8 during Irvine's brief reign.

The Championship's top home scorers are duty-bound to try to entertain and try to win and Norwich have got any number of goal outlets, with promising youngsters Josh Murphy and James Maddison added to the list after scoring in Monday's excellent 3-1 success at Preston.

However, City are a liability at the back, especially from set-plays, and that is bound to encourage a Brighton side hoping to make it six wins in a row.

Albion might look a fair price but Norwich are strong at home and it's bound to have been an odd week at the Amex so the question has to be asked as to whether they can really get themselves up for this Carrow Road trip.

Brighton
Sam Baldock (calf) is out. Centre-back Shane Duffy is out with a broken foot.