Bridge battle likely to be a close encounter 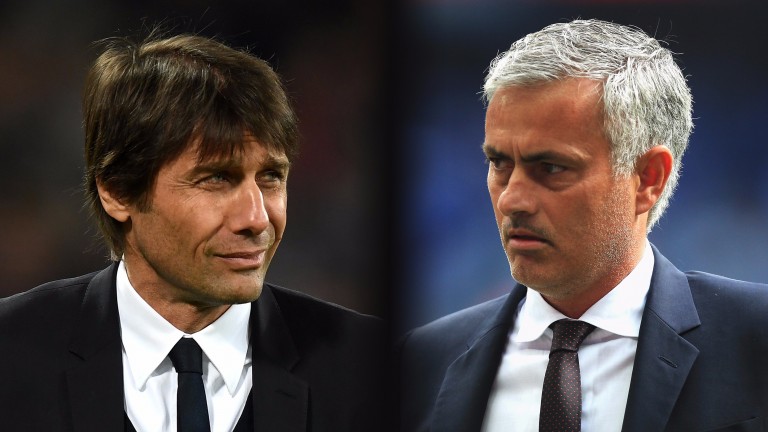 Antonio Conte and Jose Mourinho are all set for a tactical battle
Getty Images
1 of 1
By Mark Langdon UPDATED 9:38PM, NOV 4 2017

We have seen this film before.

When Manchester United venture away to one of their big-six rivals there are not usually many goals and this sequel is unlikely to be any different as the Red Devils head to Chelsea.

This time the movie is not the Return of the Jedi, rather the return of Jose to Stamford Bridge and Mourinho's men have produced the same kind of performance over and over again since he joined United last summer.

United played at their fellow elite clubs seven times under Mourinho and they have scored only once - in a defeat at Tottenham - with three 0-0 stalemates, including one at Liverpool this term.

Nullify the opposition and hope to nick something on the break has been the order of the day for their tough away matches, although it was pretty much the same at Old Trafford last week as substitute Anthony Martial scored a late winner in the 1-0 victory over Tottenham.

Mourinho's revealed his mindset in his press conference for this clash as he bemoaned a lack of credit for keeping a clean sheet against a Spurs side who ran amok against Real Madrid and Liverpool and, if anything, the accusations of being boring seem to only inspire the former Chelsea boss to continue with his somewhat tedious plans.

United were stuffed 4-0 at Stamford Bridge last year but gradually got to grips with Chelsea, losing 1-0 in the FA Cup at the same venue after Ander Herrera was sent off, and the Spaniard was the catalyst for a 2-0 Old Trafford success when his man-marking job on Eden Hazard worked a treat.

Expect Herrera to get the same gig again and, much like last season's trilogy, go for at least one team not to score.

Chelsea need to get back to basics following their 3-0 Champions League thumping at Roma and the probable return of N'Golo Kante would be a massive boost in that regard.

The champions have conceded 11 goals in the six matches since Kante got injured, although they shipped just three times in the last seven matches before he was crocked on French international duty.

Blues boss Antonio Conte is feeling the heat and coaches tend to revert to type when under pressure. Expect the Italian to concentrate on limiting the service to Romelu Lukaku. At the same time that could starve Chelsea's ability to feed Alvaro Morata.

Chelsea have fired blanks at home to Arsenal and Manchester City and may struggle to land telling blows on United.

Chelsea
N'Golo Kante could return and he could partner Danny Drinkwater in midfield with Tiemoue Bakayoko struggling. Victor Moses is out.

Key stat
Both teams have scored in only three of the teams' last 11 meetings and in two of those it needed a last-minute equaliser to level at 1-1.