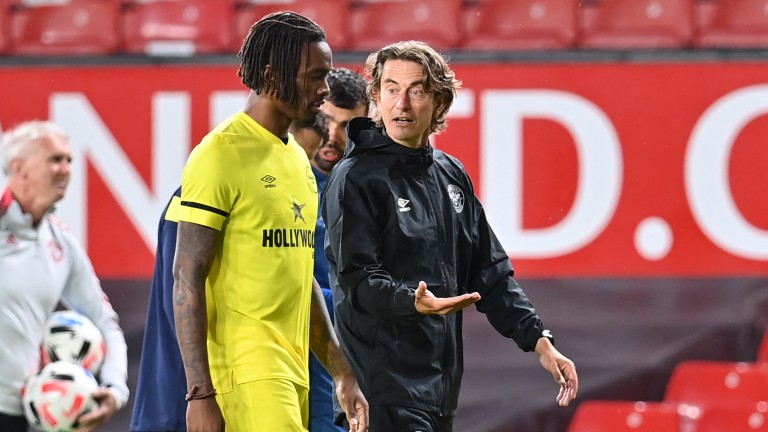 Thomas Frank is keen to point out that on the day Brentford clinched promotion in May, Chelsea were crowned kings of Europe. But if he's trying to portray an inferiority complex then not everyone is buying it.

These London neighbours - hardly rivals since they haven't played against each other in a league game for over 70 years - meet at the Brentford Community Stadium on far more level terms than Frank is trying to portray.

Brentford have won admirers galore for their superb start to the season which has yielded just one defeat. Chelsea, too, are getting approving glances for the start they have made. They, too, have lost just once.

Chelsea are massive and overwhelming favourites and in good order, but at skinny odds there's a massive temptation to take them on.

Brentford are not in the top flight to make up the numbers, or simply go down entertaining in the way that clubs such as  Norwich have been want to do.

They've already beaten Arsenal, drawn with Liverpool, won at West Ham and Frank, an ultra-astute Danish tactician, has figured out a method and a style which was good enough to get promoted, and then refined it to make his side competitive among the big boys.

They attack in numbers and defend in blocks, and if there's ever a side set to have run themselves into the ground by March it's Brentford because their work ethic is insatiable.

Chelsea's back three will be confronted by the relative novelty of a front two in the irrepressible Ivan Toney and sidekick Bryan Mbeumo, who are also the starting point of their side's defence.

Thomas Tuchel may bring back N'Golo Kante to improve his midfield – although that's not guaranteed given he's just recovered from injury and the Blues play Malmo on Wednesday in a must-win Champions League tie – and he'll be up against a wonderfully organised and tenacious Bees trio led by Christian Norgaard.

Protection from Norgaard and Vitaly Janelt will be critical with the runners Chelsea have at their disposal.

Romelu Lukaku, seemingly fit, should spearhead their attack and Frank will be cute enough to ensure the Belgian monster isn't allowed too many foot races with Pontus Jansson which would only ever end one way.

Interestingly, given Brentford are a positive side and Chelsea are finding their feet further forward now that Tuchel has thrashed out most defensive frailties, there may not be too many goals.

In Chelsea's last four matches they have scored only two goals when up against 11 men while only Norwich and Watford have fired off fewer shots than Brentford. And these two are in the top six sides for conceding fewer efforts on target.

The evidence suggests a low-scoring game, making the idea of backing Chelsea at a seriously cramped price even more questionable. Brentford have waited 74 years to revive this league derby – back them not to blow it.

In a combined 14 league games, neither of these sides have yet been behind at half time.