Brazil set to blast out of the blocks against Costa Rica 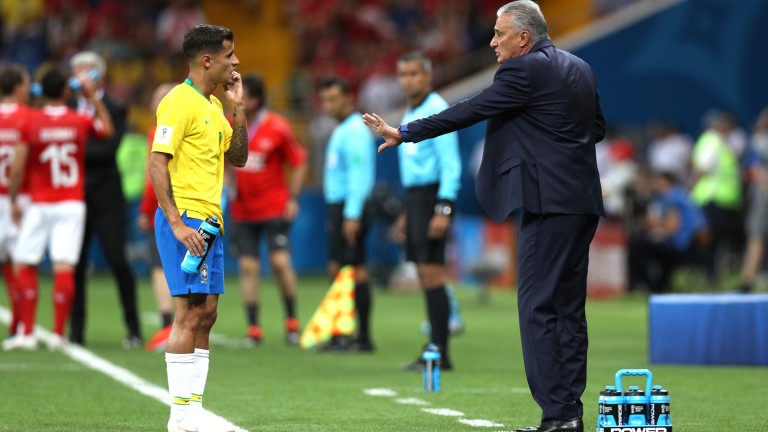 Brazil failed to win their opening game at a World Cup for the first time since 1978 but remain strong challengers for the title and can register a routine victory over Costa Rica in Saint Petersburg.

Tite went with an attacking side against Switzerland and Brazil were largely dominant – winning the shot count 20 to six – although there is room for improvement.

Too much of Brazil's play seemed to go through Neymar, making him a target for some robust Swiss defending.

Neymar was withdrawn after taking an ankle knock but initial fears that he could miss the Costa Rica game appear unfounded.

According to the Brazilian Football Federation, Neymar has returned to full training and played a full part in the session.

Having Neymar available is good news but Brazil may need to focus on other attacking strengths if they are to reach their potential.

Unlike four years ago there is an impressive supporting cast.

Philippe Coutinho has settled quickly since moving to Barcelona and showed his quality with a superb strike against the Swiss.

Gabriel Jesus, their top scorer in qualifying, had a quieter game and may need the confidence boost of a goal before getting back to the levels he showed in the closing stages of the Premier League season, when he scored five goals in seven matches for Manchester City.

Brazil have good options in reserve – Roberto Firmino played a cameo role against Switzerland and Douglas Costa was unused – and it is up to Tite to come up with a winning combination.

The Samba Stars' immediate concern is to get out of the group and there is a pressing need to beat Costa Rica and set themselves up for a trickier test against Serbia next Tuesday.

Four years ago Costa Rica reached the quarter-finals by playing with a spirit and togetherness which masked a lot of their weaknesses.

This time everything seems different with reports of a rift between goalkeeper Keylor Navas and other senior players.

Scheduled media activity was cancelled on Wednesday and an argument between defender Giancarlo Gonzalez and forward Johan Venegas was captured on a live feed from the Costa Rican Football Federation.

The pressure has increased after Costa Rica were deservedly beaten 1-0 in their opener against Serbia and a loss to Brazil would end their involvement in the tournament.

Manager Oscar Ramirez has to try something different and may turn to Arsenal outcast Joel Campbell, who came off the bench against the Serbs and offered extra pace and movement.

Campbell is the most talented individual in the squad but goes into the tournament seriously undercooked having played just eight games on loan at Real Betis this season.

There is a set-piece threat from centre-back Gonzalez, who went close to scoring against Serbia, but overall, Costa Rica look hopelessly outmatched.

Their shaky defence could have conceded a lot more goals against Serbia and it would be a surprise if they kept out the Brazilians until half-time.

Brazil
Team news
Neymar (ankle) has returned to training and is set to start.

Strengths
Neymar is the talisman but Brazil have an array of attacking threats. They have three impressive centre-backs to choose from and goalkeeper Alisson is highly rated.

Weaknesses
The full-backs are an area of concern. Marcelo is well into his thirties and better going forward than defending. Danilo is Manchester City's second-choice right-back.

Key man
Philippe Coutinho weighed in with a superb goal against Switzerland. He has the quality to unlock any defence and is growing in confidence at international level.

Costa Rica
Team news
No injury concerns are reported but Joel Campbell could get his first start up front at the expense of Marco Urena.

Strengths
Joel Campbell can offer more of a direct threat in attack and goalkeeper Keylor Navas and centre-back Giancarlo Gonzalez are key pillars at the back.

Weaknesses
Aside from Campbell, who isn't fully fit, there is a general lack of pace in the side. Defender Johnny Acosta is past his best and out of favour at his club, Espanyol.

Star man
Navas may be at loggerheads with a few of his teammates but his shot-saving skills could be needed to prevent a hammering.

Key stat
Brazil are unbeaten in their last 13 competitive games.