Neymar and Coutinho key for Tite's men in Samara 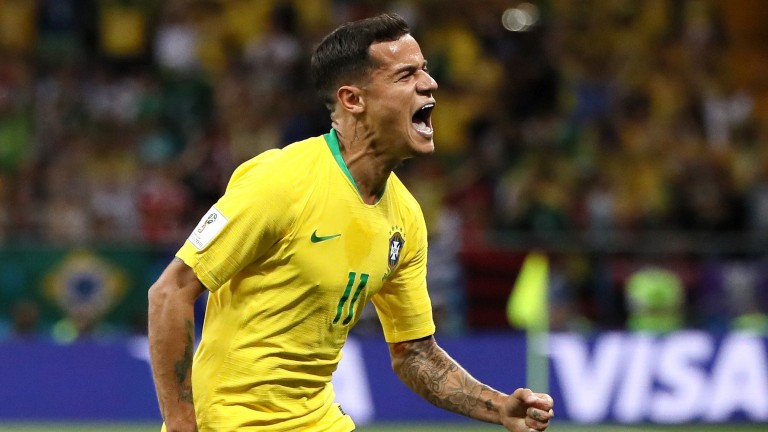 Philippe Coutinho has starred for Brazil in the World Cup
Kevin C. Cox
1 of 1
By Mark Langdon UPDATED 9:26PM, JUL 2 2018

Mexico have lost at the last-16 stage of the World Cup seven times and number eight is coming up when they tackle Brazil in Samara with a quarter-final place at stake.

The curse of the fourth game is real for Mexico and also for their opponents. As the story goes Mexico can't get past the last 16 - at least not since they returned after being banned from Italia 90 - and the teams who beat them never reach the final.

Brazil will be hoping to change that in Russia and they look well-placed to land a comfortable triumph by covering the minus one Asian handicap line with stakes returned should the Samba Stars win by a goal.

Tite's side failed to build on an excellent opener against Switzerlandand Philippe Coutinho's stunner was cancelled out by a controversial equaliser, but they have started to find their rhythm in the 2-0 victories over Costa Rica and Serbia.

Late goals from Coutinho and Neymar broke Costa Rica's hearts yet the expected-goals tally was around 2.4-0.1 so it was a fully deserved triumph and their success against Serbia was relatively trouble-free.

On that occasion Coutinho turned provider with a brilliant pass which was converted by Paulinho to break the deadlock and the former Liverpool man outshone Neymar in the group stages.

Neymar was hoping this would be his World Cup and there is still time, particularly after Lionel Messi and Cristiano Ronaldo had to pack their bags on Saturday. He has only one goal but no player had more shots in the group stage and the world's most expensive footballer is still getting back to full fitness after a foot injury.

Brazil are lethal on the counter and should they hit the front there should be more space for them to cause further damage, while Tite's side have conceded twice in their last 11 matches.

There has been some debate as to whether Roberto Firmino should replace the misfiring Gabriel Jesus but it is a nice problem to have and either man would be fancied to get joy against a Mexico side missing their best centre-back Hector Moreno through suspension.

Moreno was booked in the horrendous 3-0 loss to Sweden on Wednesday, a result which would have eliminated Mexico if they had not been saved by South Korea's shock win against Germany.

Maybe Mexico can get back to the level shown when they landed a 1-0 victory over Germany with Javier Hernandez, Carlos Vela and Hirving Lozano forming a thrilling front three, but Juan Carlos Osorio's side always seem to crumble when the pressure is on.

A sports psychologist worked with the team following the Sweden shambles but their problems are deep-rooted and not just down to their World Cup last-16 hex.

In the 2016 Copa America Mexico had been going along nicely before losing 7-0 in the quarter-finals to Chile and it was the same in last year's Confederations Cup semi-finals when they suffered a 4-1 defeat to Germany.

Brazil
Team news
Marcelo is rated 50-50 following a back spasm. Danilo returns to the squad following injury but Douglas Costa is unlikely to be risked.

Strengths
There is so much pace and trickery in a front three of Neymar, Gabriel Jesus and Willian with Philippe Coutinho supplying them from midfield. Game-changers are on the bench too if required.

Weaknesses
If Marcelo is ruled out that would mean Brazil would be without both of their first-choice full-backs as Dani Alves is sidelined for the World Cup. The centre-backs are experienced but maybe lack a bit of pace.

Key man
Mexico coach Juan Carlos Osorio had it right when he said: "No one doubts the talent that Brazil have in attack but I think Coutinho makes the difference. He is really important to Brazil."

Mexico
Team news
Hector Moreno is suspended. Hugo Ayala is the man most likely to benefit from the ban but Osorio is known for thinking outside of the box when it comes to finding tactical solutions.

Strengths
The counter-attacking forward line of Javier Hernandez, Carlos Vela and Hirving Lozano will be hoping to get the kind of space which saw them wreck Germany's rearguard in their opener in Russia.

Weaknesses
Mexico always seem to self-destruct on the biggest stage and Moreno's suspension is a big blow to a defence that has got progressively worse throughout the tournament.

Key man
Keeper Guillermo Ochoa has already faced 20 shots on target in this tournament and four years ago he became a hero by miraculously keeping a clean sheet in a 0-0 draw at Brazil's home World Cup.

Key stat
Tite has been in charge for 24 Brazil matches, during which time they have conceded just six goals.