What next for Tyson Fury? Possible opponents, SPOTY odds and Joshua fight

Gypsy King is calling the tune in heavyweight division 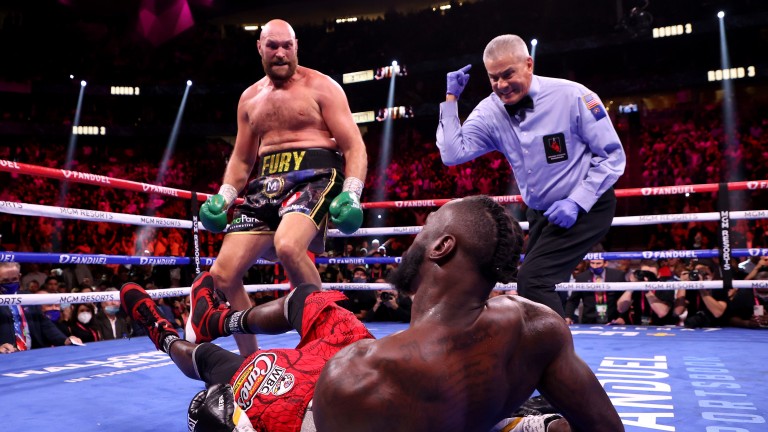 Fury brought an end to his saga with Wilder by stopping the American in the 11th round of their incredible trilogy fight.

The pair had previously battled to a draw on the first occasion they squared off, before Fury took the Bronze Bomber's WBC belt when stopping him in seven rounds in their second tussle.

The trilogy fight was a fantastically exciting contest and the Gypsy King now has the keys to the boxing world.

Fury not short of personality

Fury is as much of an entertainer outside the ring as in it. The Gypsy King won't fight again this year, but he will surely have a date with the BBC's Sports Personality of the Year awards night in December.

The Morecambe man is a 40-1 shot to lift the award and taking on hot favourite Emma Raducanu, the shock US Open tennis champion, may be one battle that Fury will lose.

However, the Gypsy King's achievements in the ring are not to be overlooked and the same can be said for his championing of mental health issues away from boxing.

Fury often treats his fans to a song after his fights and he is likely to be calling the tune in the heavyweight division for sometime yet.

Next fight for Fury?

Dillian Whyte was due to face Otto Wallin on October 30 and the winner was to become the mandatory challenger to Fury's world title. However, that fight is now off after Whyte suffered a shoulder injury.

The contest may be rescheduled for a later date, but the Body Snatcher remains the WBC interm champion and he now has a clear route to Fury. The WBC have the power the order the rearrangement of the Whyte v Walling bout and much will depend on what course the organization take. It's plausible that Fury's next bout will come against the Brixton man early in 2022.

Of course, mandatory challengers don't always get their shot anyway, but with the other three belts tied up in the Oleksandr Usyk v Anthony Joshua rematch the path to a unification bout seems blocked for the time being.

Whyte has been waiting patently for the chance to box for a world title, and with Fury not having fought in the UK for three years, it could see a bout on home soil for the British pair if he can recover well from his injury.

The chase for Usyk unification fight

If Fury and Usyk were to agree a unification fight in the next 30 days that would usurp an order of a mandatory defence by the WBC.

However, the Ukrainian is set for a Joshua rematch in March 2021 and that closes the door on the WBO, WBA and IBF belts.

It's hard to see AJ turning the tables on Usyk, and if the Ukrainian holds onto his belts, it could pave the way for a huge fight between the two champions at the end of next year.

Usyk is 1-2 to frank the form of his win at the Tottenham Hotspur Stadium in September, while Joshua is 2-1 for revenge.

AJ fight could still be the big ticket

There are so any obstacles in the way of the much-talked about fight between Joshua and Fury and the fact that AJ lost his world titles to Usyk doesn't help matters. However, Joshua remains a huge draw and a fight against Fury would still be a massive money maker.

Certainly, if Joshua was able to win his belts back in his rematch against Usyk the picture could become a little clearer, but title or no title, this fight would certainly capture the imagination.

We had a taster when the fight was unofficially announced by promoter Eddie Hearn, before an arbitration judge ruled that Fury was obliged to fight Wilder again and it would be nice to see the main event.

AJ's stock has certainly dropped since then, but Fury v Joshua would still be something to look forward to, even just to end the arguments over who would win.

Bookmakers are in little doubt regarding the outcome. Fury is 4-11 favourite with Joshua 5-2 to land a surprise success if they can ever let their fists do the talking.