Everything you need to know for the blockbuster heavyweight contest 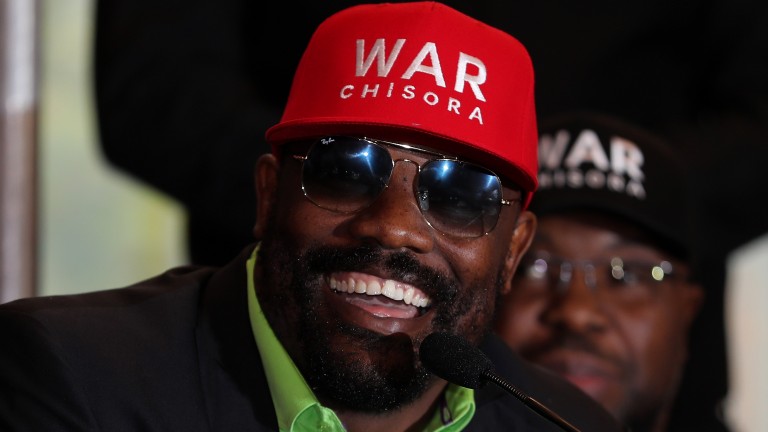 Oleksandr Usyk takes on Dereck Chisora in a much-anticipated heavyweight bout. Here are all the details:

The fight has been officially confirmed for Saturday October 31, 2020.

What time does the action start and who else is fighting?

The Sky Sports Box Office broadcast begins at 7pm, with four bouts featured on the undercard. The main event is expected to start at approximately 10.30pm.

Kambosos Jr is undefeated in 18 professional fights, with 10 stoppages already to his name. At 27, he is six years younger than the experienced Selby and will provide a stern test.

Popular Doncaster heavyweight fighter Dave Allen has been sparring with Oleksandr Usyk, and also features on the card and collides with the dangerous Christian Hammer, who has shared the ring with Luis Ortiz, Alexander Povetkin and Tyson Fury.

Where can you watch Oleksandr Usyk v Dereck Chisora?

Sky Sports subscribers will be able to purchase the event online or through their TV using their remote.

Ukrainian Oleksandr Usyk dominated the cruiserweight division since turning professional in 2013, winning the World Boxing Super Series and then knocking out Tony Bellew. He enjoyed a highly-decorated amateur career and is undefeated in 17 professional fights.

He possesses sublime boxing skills and brilliant footwork, making him an elusive and solid fighter in defence as well as a dangerous and slick puncher when coming forward.

This is Usyk's second-ever fight at heavyweight, as WBO cruiserweight champion he steps up in weight and automatically becomes mandatory challenger to the holder of that belt in the heavyweight division - Anthony Joshua. That mandatory position is on the line here.

Dereck Chisora, 36, is a vastly experienced fighter and has 41 professional fights under his belt. He was knocked out by Dillian Whyte two years ago, but has since won three bouts, most recently stopping David Price in the fourth round at the O2 Arena 12 months ago.

At this stage of his career, this is likely to be the final run at a shot for a world heavyweight title for Chisora, who is now managed by former world champion David Haye.

The Zimbabwean-born British brawler surrenders height and reach here, but throughout his career Chisora has fought on the front foot and will look to apply early pressure on his opponent who has yet to establish himself in this weight division.

What are the betting odds for Oleksandr Usyk vs Dereck Chisora?

What is the best bet for Oleksandr Usyk vs Dereck Chisora?

The shrewd Eddie Hearn was quick to sign Oleksandr Usyk to his Matchroom stable after he won the World Boxing Super Series back in 2018 and established himself as king of the cruiserweight division.

The Ukrainian effortlessly brushed aside Tony Bellew in his final fight at that 200lbs and is now expected to make some serious noise at heavyweight.

Chisora is a tough and durable opponent who will certainly test whether or not Usyk has the size, heart and power to succeed at heavyweight, but with all his experience comes mileage on the clock.

Usky is likely to be elusive and look to counter Chisora early on in this bout. The only realistic chance of an upset here is if Chisora can land something in the first couple of rounds and jump on his man.

The 33-year-old Ukrainian retired from amateur boxing with a record of 335−15 and won a heavyweight gold medal at the London 2012 Olympics, his skills and technique are unquestionable - that is what should win him this fight.

It remains to be seen if he has the power to knock out his opponents in this division, but he certainly has the skills to out-point them and a comprehensive points decision in Usky's favour is expected.