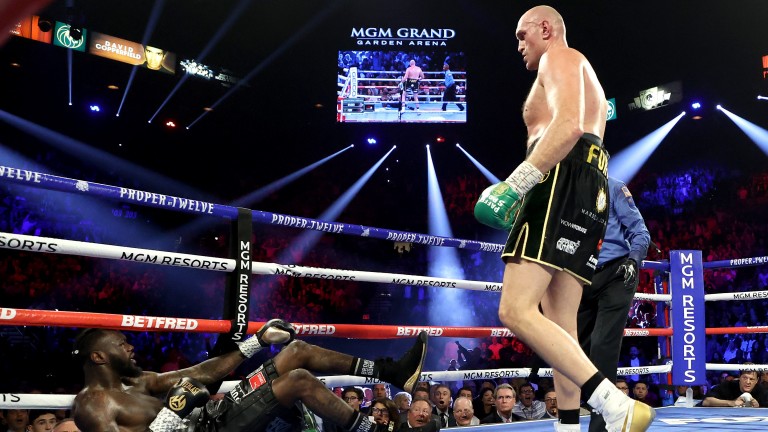 Fight fans were expecting to see Tyson Fury take on Anthony Joshua for the undisputed heavyweight championship of the world, but the Gypsy King will step into the ring with Deontay Wilder for a third time instead.

Fury stopped the Bronze Bomber in the seventh round to claim the WBC belt in February 2020, and the British banger has announced that he has agreed to fight Wilder after the American triggered a clause for another clash.

That came after the pair battled out a split decision draw at the Staples Centre in 2018.

The WBC champ was ordered to face Wilder by an arbitration court, which put paid to any hope of an undisputed British heavyweight champion, for the time being at least.

Speaking after agreeing to a third fight against Wilder, Fury said: "You're getting smashed. When I say smashed, I mean smash, smash, smash, bang.

"You're getting knocked out. End of. One round, you're going. I've got your soul, your mojo, everything."

Fury v Wilder: When will it happen?

Wilder had been in a training camp prior to the court finding in the American's favour. That raises questions as to why the Bronze Bomber was confident enough to be training even after a bout between Fury and Joshua had been announced.

The third fight has been scheduled for July 24.

Fury v Wilder: Where will it happen?

The bout will take place in Las Vegas and with fans returning to sporting venues across the world it should be an electric atmosphere.

Fury and Wilder have clashed twice previously and they are now set to contest a third fight with the WBC belt on the line.

The pair slugged out a split decision draw in 2018 and punters can probably still remember the Gypsy King rising from the canvas after being knocked down in the 12th round.

The Bronze Bomber floored the Brit and, like most spectators, thought that he had won the fight. However, Fury beat the count and perhaps should have got the decision after the final bell.

The second bout between the pair couldn't have been more of a contrast. Fury completely nullified Wilder, by going on the front foot and dismantling the American in seven rounds.

The Bronze Bomber is probably the biggest puncher in boxing, but he didn't have many opportunities to use that power and Fury busted him up round-after-round.

Fury v Wilder: Who wins and why?

After watching the second fight it's difficult to see anything other than a third victory for Fury. Of course, Wilder carries devastating power, but he doesn't have the boxing ability or movement to utilise that against top-level opposition.

Fury is likely to go on the front foot once again and he was too fast, too slick and far too good for the American last time out.

At the time of the second fight, Wilder was unbeaten, and full of confidence and he was still dispatched by his opponent.

It's possible that a lot of the Bronze Bomber's confidence, heart and belief will have been knocked out of him by that defeat to Fury and it's hard to see how he is going to improve at the age of 35.

Wilder has a puncher's chance, but he may find himself stopped by the Gypsy King again.

Fury v Wilder: What next for Anthony Joshua?

Joshua was expecting to be stepping into the ring against Fury after the fight was signed and sealed, but it's not going to be delivered.

AJ’s path is also now set in a different direction, after the WBO ordered the Watford puncher to face their mandatory challenger Oleksandr Usyk.

Joshua now has just over a week to decide if he is going to take on the Ukrainian or opt to vacate his WBO title.

Where to watch Fury v Wilder

Fury v Wilder will be a joint pay-per-view production in the United States between ESPN and Fox Sports.

ESPN has a five-fight deal with Fury, worth a reputed £80million, while Fox has a deal with the American.

The fight is likely to be live on BT Sport Box Office in the UK. Fury has a strong relationship with Frank Warren’s Queensberry Promotions and his most recent fights have all been on the channel.

Fury destroyed Wilder at the MGM Grand last year and it's possible that he could get the American out of the ring even earlier this time around.

The Gypsy King battered Wilder before the fight was stopped in the seventh round and there is little to suggest that the underdog can turn the tables.

The Bronze Bomber has huge punch-power, but he doesn't have the skills to avoid a boxer of Fury's ability and it's hard to see him getting too many opportunities to let his big hooks go.

It's also worth considering the mental aspect of the bout. Wilder is a beaten man, his confidence is likely to have taken a big dent and you have to wonder if the desire remains.

Fury is likely to dominate the fight as he did in their previous meeting and the Gypsy King can once again land a stoppage victory.