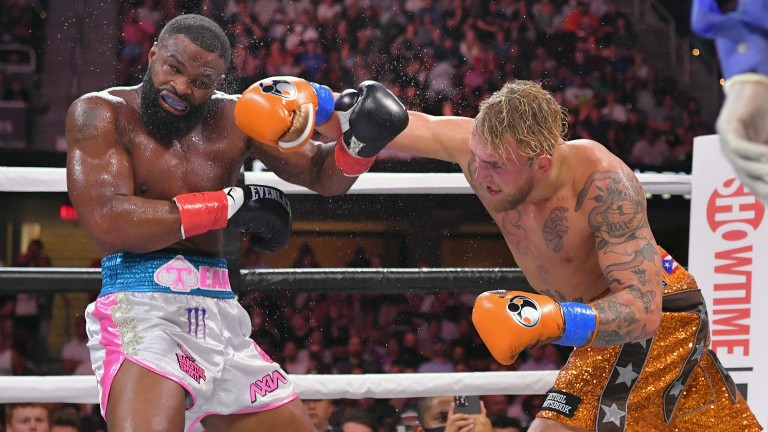 Jake Paul makes his latest foray into the boxing ring when he takes on professional fighter Tommy Fury and we look at how the bout may play out.

Tommy Fury v Jake Paul:
Where to watch & who will win

The fight will be shown on BT Sport Box Office in the UK.

Tommy Fury, the brother of heavyweight king Tyson, is a professional fighter, while opponent Jake Paul is a YouTuber turned boxer, although the outcome of their fight may not be as clear-cut as that suggests.

Paul is the bigger of the two fighter and he has shown a fair level of boxing ability and the conditioning to fight for eight rounds in his seven bouts to date.

Fury, meanwhile, boasts an unbeaten record, although his opponents did have a combined record of 14-175-5. That tells you all you need to know about the quality of opposition he has been facing and quotes of 4-7 look to be overplaying his ability.

Paul looks a value outsider at the current prices and a points victory for the American could be on the cards.

Paul has announced that his tussle with Fury is set to take place on December 18.

The Amelie Arena in Tampa will play host to the contest and it is expected to get underway around midnight.

Paul has had four fights to date and made a successful debut when beating fellow YouTuber Ali Eson Gib in January 2020.

The Problem Child then went on to score a knockout victory over former basketball player Nate Robinson, before MMA fighter Ben Askren was stopped in the first round earlier this year, He outpointed another mixed martial artist, Tyrone Woodley, in August.

Paul's win over Woodley is certainly the most impressive victory on his card and the American appears to have gained a fair amount of boxing skill in a short space of time.

Paul has picked his opponents well and he has enjoyed a considerable size advantage in all four of his contests.

The Problem Child stands at 6ft 1in and the 5ft 10in Askren is the tallest fighter Paul has tackled. Askren, Woodley and Robinson were all in their late 30s when taking on the Ohio man, and Paul has made sure he has plenty in his favour when picking his foes.

That's likely to be the case against Fury too. Paul weighed in at 191lbs when taking on Askren, while TNT tipped the scales at 179lbs in his last fight against Anthony Taylor.

Weight does tell in boxing and Paul is the naturally bigger man.

Fury has amassed seven professional wins, but the standard of his opponents have been extremely limited. Of course, TNT is the early stages of his career, but he has fought just six times since his debut in 2018 and he has taken extended breaks from the sport to appear on reality TV shows.

Fury's debut opponent Jevgenijs Andrejevs had lost 102 fights prior to stepping in the rign with the Manchester man, Callum Ide hadn't won any of his 30 professional bouts and Genadij Krajevskij and Scott Williams were also winless prior to taking on TNT.

Can Fury stay the distance?

Six of Fury's seven bouts have been four-round affairs and his sole six-rounder ended in the first. TNT has been more active this year, but there are periods of inactivity on his card and it will be interesting to see if he has the conditioning to go the full eight rounds if required against Paul.

The Problem Child went the distance against Woodley last time out and he has at least proved that he can see a fight out to the final bell.

BT Sport Box Office were the UK broadcaster for Paul's clash with Woodley and Frank Warren has a promotional deal with Fury. The fight will be shown live on BT Sport pay-per-view.

Fury is the favourite to win the bout and hold onto his unbeaten record. However, not all bookmakers are singing from the same hymn sheet. Paul is as big as 13-8 with Betfair, Betfred and Paddy Power, but bet365 make the American just a 5-4 shot.

The draw has to be considered in a fight of this nature and length and the stalemate is a 12-1 chance.