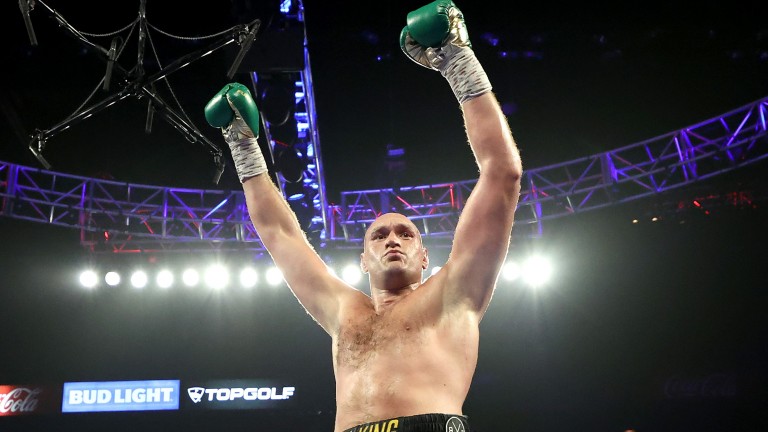 One of the biggest fights in the history of boxing has taken a step closer to being made with Anthony Joshua and Tyson Fury signing up to a two-fight deal with all four world championship belts on the line.

When the British fighters meet, a first-ever undisputed heavyweight champion of the world in the four-belt era will be crowned.

With both fighters signed up to a lucrative deal, the next stage will be finding the venue. Joshua's promoter Eddie Hearn has refused to rule out anywhere in the world with a number of countries already in the frame, he said: "I actually feel we've done the hard part.

"Speaking for myself, Anthony and his team at 258 Management [258 MGT], I know how hard we've worked these last couple of months, and I just feel that this fight is so big it's not a difficult sell.

"We''ve already had approaches from eight or nine sites. The offers have come from multiple countries in the Middle East, from Asia, Eastern Europe, and America."

Joshua v Fury: When could it happen?

There have been two huge obstacles in the way of this fight happening.

Firstly, a venue must be decided upon and the ongoing global pandemic has slowed the process down.

All parties will want to find a location where the biggest possible crowd can witness the bout live and safely - thus generating the highest gate receipts.

Secondly, and thankfully now out of the way, Ukrainian Oleksandr Usyk was named the mandatory challenger to Anthony Joshua's WBO title and a refusal to face him may have resulted in AJ losing the belt.

After plenty of negotiation, a fight between the former cruiserweight king Usyk and former Team GB Olympian Joe Joyce for the interim version of the belt has now been ordered, with the possibility of the winner being crowned champion after the first bout between Fury and Joshua.

The winner of the first fight is expected to relinquish at least the WBO belt to prevent further mandatory complications heading into the second bout and therefore crowning the victor of Usyk and Joyce.

The issue of the venue is not close to being resolved and reports of the first fight occurring in June or July seems optimistic.

Joshua v Fury: Where could it happen?

Anthony Joshua's rematch with Andy Ruiz Jr in Saudi Arabia in December 2019 may have proved to be a dress rehearsal for the first Joshua-Fury bout.

Eddie Hearn has already revealed that numerous territories have shown interest in staging the first fight, including Saudi Arabia.

The Matchroom chief has held discussions with a number of countries in the Middle East, while America - namely Las Vegas - is also in the running.

Without the possibility of getting 100,000 fight fans into Wembley Stadium, a fight in the UK looks increasingly unlikely.

Wherever the first fight is staged, a huge site fee - running into the millions - will be commanded, which narrows down the possible locations.

Safe travel for UK fight fans to the chosen destination may also play a part in the decision of where, and, more importantly when.

London 2012 Olympic gold medallist Anthony Joshua brushed aside all before him in his first 23 professional bouts and he unified the heavyweight division.

There had been only a couple of uneasy moments for the Brit, including being noticeably hurt in his fight with Dillian Whyte and picking himself up off the canvas to beat former world champion Wladimir Klitschko in 2017.

But one of the biggest shocks in the history of boxing came in 2019 when Mexican Andy Ruiz Jr shocked the world and recovered from being knocked down in the third round to stop Joshua in the seventh and snatch away his titles.

Joshua boxed smartly at range to win the rematch six months later in December 2019 and has since stopped Bulgarian Kubrat Pulev in emphatic fashion.

Tyson Fury put up one of the best performances from a British fighter abroad in 2015 when, aged just 26, he defeated undisputed world champion Klitschko in Germany. The Ukrainian had reigned champion for a decade, but Fury won via unanimous decision despite having a point deducted.

The Morecambe-based boxer then spent time away from the ring and lost his belts, before he returned with a couple of soft fights.

In 2018 Fury surprisingly stepped into the ring with heavy-hitting and feared WBC champion Deontay Wilder and earned a controversial draw, which many felt Fury had won.

Fury's iconic rise from the canvas in the final round when seemingly knocked out and then finish the fight with a flourish was an incredible effort.

Fury then beat Tom Schwarz and Otto Wallin, both in Las Vegas, before stepping back into the ring with Wilder in February last year.

The Gypsy King dominated Wilder from the off and knocked him down in rounds three and five before Wilder's corner threw the towel in and saved him from a certain knock out.

Joshua v Fury: Who wins and why?

Tyson Fury for a long time has been chalked up as the favourite for this fight and rightly so.

Fury's footwork in attack and defence is incredible for a heavyweight and he rates the best in the weight class on the planet.

Joshua's frailties were exposed by Andy Ruiz and the manner in which Fury took the fight to Deontay Wilder suggests he can do the same with AJ.

A tentative start to this fight is expected with both fighters respecting each other's power, but Joshua has shown a willingness to trade once hurt and that could be his undoing.

Fury has proved his chin and durability, he can cope with any onslaught from Joshua and wins this fight when able to fire back.

A middle-to-late stoppage for Fury could be a way for punters to go.

Where to watch the Joshua v Fury fight?

Expect numerous platforms to broadcast this fight across the globe and it will certainly be pay-per-view.

Fury has signed deals with BT Sport and ESPN, while Joshua's broadcasters are Sky Sports and streaming platform DAZN.

All parties have shown a willingness to cooperate and this fight is likely to be available to watch in a number of places.

FIRST PUBLISHED 4:34PM, MAR 24 2021
Without the possibility of getting 100,000 fight fans into Wembley Stadium, a fight in the UK looks increasingly unlikely