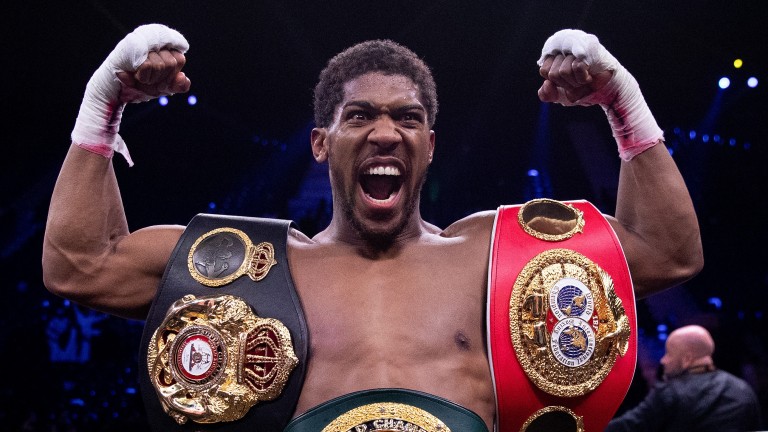 Anthony Joshua puts his belts on the line against Oleksandr Usyk
Richard Heathcote
1 of 1
By Racing Post Sport 12:25PM, JUL 22 2021

Anthony Joshua was expecting to be taking on Tyson Fury in his next heavyweight clash, but nothing is certain in boxing and he now faces a tough test against mandatory challenger for his WBO belt Oleksandr Usyk.

Joshua holds three heavyweight titles and there's still potential for an all-British undisputed champion if AJ can find a way past Usyk and Fury is successful for a second time against Deontay Wilder.

However, there are plenty of punches to be thrown before any bout between the two Brits and Joshua certainly won't be taking his Ukrainian opponent lightly.

Speaking after the Tottenham Hotspur Stadium was confirmed as the fight venue, Joshua said: "We are two Olympic gold medallists who have fought our way to the top and never avoided challenges. The stage is set and I am ready to handle business."

Joshua v Usyk: When will it happen?

After the clash against Tyson Fury fell through Anthony Joshua had to decide to either defend his WBO belt against mandatory challenger Oleksandr Usyk or vacate and pursue other options.

AJ has elected to defend his title and the fight will take place on September 25.

Joshua v Usyk: Where will it happen?

Anthony Joshua and Oleksandr Usyk will become the first boxers to fight at the Tottenham Hotspur Stadium in London.

Joshua v Usyk: Who wins and why?

It's an interesting fight that brings two different directions together.

On one hand Anthony Joshua is a three-belt heavyweight champion, who has the stronger form in this division and will also benefit from size, power and reach advantages.

That's not to say that AJ has no boxing skills, but his limitations were exposed slightly in victory against Wladimir Klitschko and fully in defeat to Andy Ruiz.

Oleksandr Usyk is an unbeaten former undisputed cruiserweight champion and a technically brilliant boxer. However, he is small at heavyweight and doesn't carry huge punch power in this division.

Joshua's power and size is an advantage, but Usyk has the skills to upset the champion.

Where to watch Joshua v Usyk

The bout will be shown on Sky Sports Box Office in the UK and on DAZN in the US. This is the final fight of Joshua's existing contract with Sky and it will be interesting to see what the future holds.

Anthony Joshua has all the heavyweight form. AJ has been in with the likes of Kubrat Pulev, Alexander Povetkin, Joseph Parker and Wladimir Klitschko and he is obviously the proven performer at this weight.

However, his vulnerability and suspect chin has been exposed by Wladimir Klitschko and Andy Ruiz. Klitschko was a big puncher and there's no real surprise he rocked the Watford man. However, Ruiz doesn't carry a great deal of power, but the Destroyer proved that volume can be an effective weapon when stopping AJ in 2019.

Oleksandr Usyk's win over Dereck Chisora is the only real form the Ukrainian has in this division, but Del Boy is a tough operator and the Cat is a former undisputed cruiserweight champion and brilliant amateur performer.

Joshua has the size advantages and there is of course a question mark over Usyk withstanding AJ's power. However, the Ukrainian is a tough performer and his skills and movement may mean that he isn't tagged all that often.

Usyk is an elite-level performer and it's not often you get to back fighters of his quality at prices like 21-10. He looks value to win what promises to be a great fight.