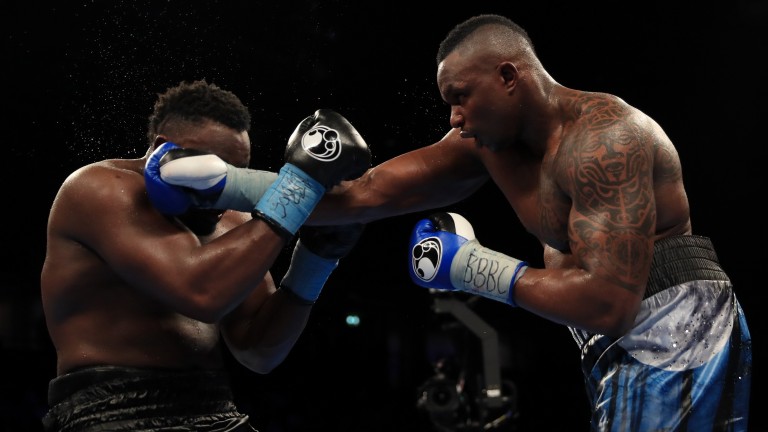 Dillian Whyte has been one of the most avoided heavyweights is recent years and despite a string of impressive victories he has had to watch in frustration as Anthony Joshua and Tyson Fury have hogged the headlines and the big paydays.

But Joshua's implosion against Andy Ruiz a few weeks ago will have given Whyte hope of finally getting another world title shot and he can make a statement with a convincing victory against unbeaten Colombian Oscar Rivas at the O2 Arena in London.

Whyte is rarely in a dull fight and he has improved markedly since the only defeat of his career against Joshua four years ago, winning nine in a row against some good opposition including Joseph Parker, Dereck Chisora (twice), Lucas Browne, Robert Helenius and Dave Allen.

Whyte is nicknamed The Bodysnatcher for a reason, and he could give Rivas problems he has not experienced before in the pro ranks as he is capable of mixing up a range of attacks with excellent body shots, uppercuts and jabs.

Brutal left hooks have been his most explosive weapon recently, detonating on the chin of his last three opponents. A left hook turned Chisora's lights out to settle a brutal war, decked former world champion Parker and left Browne face down on the canvas.

Whyte is also dangerous on the back foot when he chooses but often prefers to fight in the pocket which will give Rivas - who is four inches shorter - hope that he can land big punches on the inside as Ruiz did to Joshua.

But Rivas lacks the mobility of the elite heavyweights and Whyte has proven durability - usually only looking vulnerable when he is heavily fatigued - and the Colombian may not have the size or the skills to drag Whyte into the trenches.

Rivas was a solid amateur, with wins over Andy Ruiz and Kubrat Pulev but, although he is unbeaten since turning pro and has an impressive KO ratio, his level of opposition has been way below that of Whyte.

He lacks big-fight experience, and he has never fought in the UK before with the majority of his contests taking place in his adopted homeland of Canada.

Rivas has the power to cause an upset and he is 7-1 to win by KO, but Whyte deserves to be a strong favourite. The home fighter is 1-4 to get the victory and 11-10 to win on the scorecards, but it may be worth backing him to get the stoppage at 7-4 and send out a strong message to the big names in the division.

Two of the most popular boxers in Britain face off as the co-main event, and it's a hard one to predict.

It should be a cracking fight mainly because both men can be vulnerable and at any moment the fight could flip in the opposite direction.

A few years ago Price was one of the hottest prospects in the heavyweight division having won a bronze at the 2008 Olympics, but his pro career went off the rails with back-to-back defeats against Tony Thompson in 2013 and ever since he has had a reputation for self-destruction.

Seeing giant Pricey getting toppled has become a regular occurance and is always a sight to behold, often as spectacular as the slaying of Talos in Jason and the Argonauts.

However, Price's power is legendary and despite his many flaws he remains one of the hardest punchers in the heavyweight division.

This could be a problem for Allen because, while he is renowned for his durability he gets hit far too easily, and if Price lands cleanly it could be all over in the blink of an eye.

Allen's rise through the rankings has been a joy to watch over the last year and the charismatic Doncaster battler is undoubtedly in the best form and condition of his career, having teamed up with Darren Barker in an attempt to become a world-title contender.

Four wins in a row have filled the White Rhino with confidence and he seems to have no doubts that he will beat Price - calling out Alexander Povetkin as his next opponent - but he must be careful not to look past him.

The common thinking is that Allen will grind it out for the first four or five rounds then Price will start to run out out of energy, the doubts will start to fill head and Allen will finish him off inside the distance, but it may not be that simple.

It's hard to imagine that one of these guys won't get knocked out, and while Allen is the man on the rise, don't rule out big-punching Price upsetting the formbook.

Dereck Chisora's recent performances prove that he is far from finished, and if he can replicate that form against Artur Szpilka he should chalk up another victory.

Chisora flattened Carlos Takam in eight rounds last summer and was ahead on the scorecards against Dillian Whyte in December before being stopped in the 11th round and a win over Szpilka, who was stopped by Deontay Wilder in January 2016, should keep him in line for more big paydays.

Szpilka has had only three fights in three and a half years since losing to Wilder, and hasn't impressed in any of them. He has been stopped in each of three of his defeats, and a motivated Chisora should also be able to take him out.

However, Del Boy often lacks motivation and has a habit of throwing in a stinker every now and again, so keep stakes low.