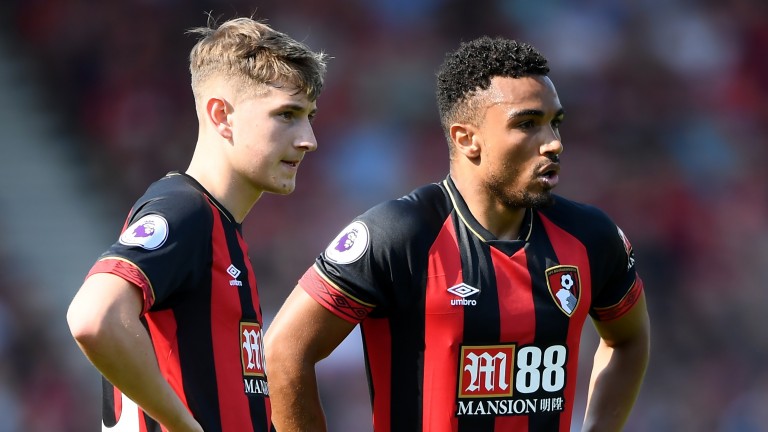 Junior Stanislas and David Brooks of Bournemouth
Alex Davidson
1 of 1
By Dan Childs 8:00PM, MAY 3 2019

One more victory would guarantee Tottenham a place in next season’s Champions League but the draw looks a strong possibility when they take on Bournemouth.

Two points would probably be enough to secure a top-four finish for Spurs, who have a much better goal difference than Chelsea, Arsenal and Manchester United.

And that fact will not be lost on Mauricio Pochettino if the scores are level with time running out.

Spurs have shared the points just once in 36 league games this season but a lot of their recent games have been tight with only two of the last 12 decided by a margin of two goals or more.

It is a big game for Spurs but they have an even bigger one next Wednesday, taking on Ajax in the second leg of the Champions League semi-final, and that must come into Pochettino’s thinking.

Injuries have stretched the Spurs squad and they looked tired and disjointed when losing 1-0 at home to West Ham last Saturday.

They were even worse for the first 25 minutes against Ajax on Tuesday but they improved after switching from a back three to a back four and looked even better when Moussa Sissoko came on for Jan Vertonghen just before half-time.

The second half wasn’t exactly vintage Spurs but they got a better grip of the midfield and prevented Ajax from killing off the tie.

A cutting edge up front was missing but that problem could be solved at Bournemouth by the return of Heung-Min Son, who was suspended for the Champions League game.

However, back-to-back defeats will have dented confidence and Pochettino has a big decision to make over Sissoko, who is crucial to Tottenham’s midfield but was not deemed fit enough to start the game against Ajax.

The decision may be taken to rest Sissoko for the second leg but that would present Bournemouth with a great opportunity.

There would be a strong temptation to back Bournemouth against a Sissoko-less Spurs but punters will need to keep an eye on the home side’s teamsheet because Eddie Howe has revealed that five players - Nathaniel Clyne (cramp), Dan Gosling (calf), David Brooks (ankle), Dominic Solanke (ankle) and Adam Smith (knee) – are injury doubts.

Brooks, Clyne and Gosling started last Saturday’s 3-3 draw at Southampton and would be tough to replace because Bournemouth’s squad is also stretched.

Defender Jack Simpson made his second Premier League start at Southampton, midfielder Emerson Hyndman got his first league appearance of the campaign and 20-year-old striker Sam Surridge (on loan at Sky Bet League Two Oldham earlier this season) was an unused substitute.

Clyne and Gosling were unable to finish the game and, given the mounting injury list, Howe must be relieved his side's Premier League safety is not on the line.

The pressure is off for Bournemouth but teams always want to be competitive in their last home game and Howe will be mindful of rewarding their fans, who have watched disappointing losses to Burnley (3-1) and Fulham (1-0) in the last month.

His team may be patched-up – as will Spurs – but there should be no lack of commitment and both sides could get something for their efforts.

Tottenham
Heung-Min Son returns after missing the 1-0 loss to Ajax through suspension but Serge Aurier and Erik Lamela (both hamstring), Harry Kane (ankle), Jan Vertonghen (head) and Harry Winks (groin) are out.

Key stat
Bournemouth have not won any of their last five home games.