Kevin De Bruyne could find the net for the champions 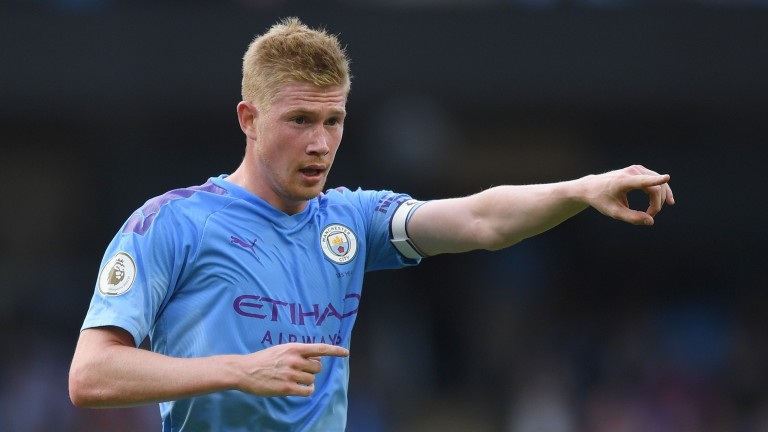 A Bournemouth shot would represent a significant improvement on the last time Manchester City visited Dean Court but it’s hard to envisage the Cherries having much more than that to celebrate.

Eddie Howe’s men are an attractive, free-flowing, attack-minded side, which made it all the more remarkable when, in March, they failed to register a single effort on or off target in the most one-sided 1-0 defeat you will ever see.

They didn’t even win a corner that day in a match in which City boasted an almost ludicrous 82 per cent possession.

The numbers may not be quite so one-sided this time though, irked by the manner in which they dropped points at home to Tottenham last Saturday, City will surely return to winning ways. On each of the previous seven occasions they have drawn a Premier League game they went on to win next time out and they ought to extend that sequence to eight.

City are plenty short enough but then they have won all eight of their Premier League showdowns with the Cherries by an aggregate scoreline of 25-3.

Unless you fancy a lay of City or a bit of Howe’s hopefuls at a big price, this is one of those fixtures where you need to sift through some of the other markets.

One possible punt is Kevin De Bruyne to score at any time at 5-2 with Betfred. He’s as short as 6-4 elsewhere.

The Belgian is the assist king, putting goals on a plate for Raheem Sterling and Sergio Aguero in the 2-2 draw with Tottenham.

But he’s also a regular goalscorer in a team full of them and he will get sights of Aaron Ramsdale’s goal.

Bournemouth look an improved side defensively this season, though they ought to be given that they shipped 70 goals in 2018-19. Only Fulham and Huddersfield let in more.

A well-oiled back four marshalled by Nathan Ake will have Jefferson Lerma and Phil Billing around them to strengthen the shield in front of Ramsdale.

Space will be at a premium, therefore, around the edge of the box so De Bruyne’s ability to drift in and out, time his runs into the box and shoot from anywhere is a huge asset.

The anomaly with Bournemouth is that as they have improved in defence they suddenly look far less flamboyant going forward.

It’s notionally a classy quartet of Ryan Fraser and Harry Wilson flanking Callum Wilson and Josh King, yet they took an hour to have a shot on target in their opening 1-1 draw against Sheffield United. Then, after taking an early two-goal lead at Aston Villa, they managed just two more shots on target and were hanging on at the end.

They are capable of springing surprises – they beat both Spurs and Chelsea in front of their own fans last season – but their record against the elite six is still awful.

And, quirkily, they haven’t kept a clean sheet in their last 21 Premier League outings on a Sunday. Make of that what you will.

City, of course, are a winning machine. They had won 15 in a row prior to last weekend and can start another winning run on the Dorset coast.

Man City
John Stones is out but Aleks Zinchenko has shaken off cramp. Benjamin Mendy and Leroy Sane are out.