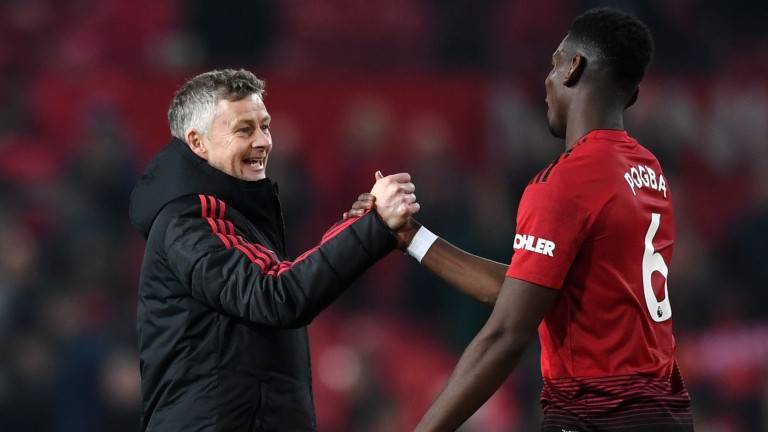 One Manchester side have suffered two shock defeats at massive prices in the last week and now it could be the turn of Man United to be upset when Bournemouth visit Old Trafford.

If the wins for Crystal Palace and Leicester over City highlighted anything it's that invincible football teams do not exist.

It's a low-scoring sport where small margins sometimes make a massive difference and the idea of backing United at short odds would have been a nervous proposition just a couple of weeks ago before Jose Mourinho was replaced by Ole Gunnar Solskjaer.

Many believe United are a different beast following the sacking of the toxic Mourinho and Solskjaer certainly could not have made a more impressive start than comfortable wins over Cardiff (5-1) and Huddersfield (3-1).

There was a swagger back to the Red Devils with the players released from the shackles of Mourinho's mind-numbing football as Paul Pogba, referred to as a virus by the previous boss, was given the freedom he desires by Solskjaer, who says he will build the team around the charismatic World Cup-winning midfielder.

That assessment could all be correct and under cult hero Solskjaer United may be heading for a brighter second half of the campaign with an interim manager sensing the opportunity for a longer stay at a club he quite clearly holds close to his heart.

However, that is all factored into the odds and it would be remiss of punters not to at least question parts of this Solskjaer love-in - let's call it Red Devils advocate.

United have beaten Cardiff and Huddersfield, teams ranked first and second-favourites in the ante-post list for relegation and at the halfway stage both were still rated odds-on for the drop.

A long-range free kick and a deflection put United on their way at Cardiff and Terence Kongolo missed a fair chance for Huddersfield at 0-0 before David de Gea's stunning save from Laurent Depoitre kept the Terriers at bay as they chased an equaliser.

On the early shows Bournemouth were a bigger price to win at United than they were to beat Tottenham at Wembley last time out. Given where Spurs and the Manchester men are in the table that makes absolutely no sense.

There has been a move for Bournemouth but the Cherries remain a juicy price to bounce back from their 5-0 loss to Spurs which was harsh on Eddie Howe's men.

Howe will take the fight to the big teams and it can end in heavy defeats, although since the start of the 2016-17 season Bournemouth have beaten Arsenal and Liverpool at home and won at Chelsea.

Bournemouth
Simon Francis is set to miss the rest of this season, joining Adam Smith, Lewis Cook and Dan Gosling on the sidelines. The absence of Smith and Francis leaves Bournemouth without a recognised right-back so Charlie Daniels may move across from the left or they could switch to three centre-backs.