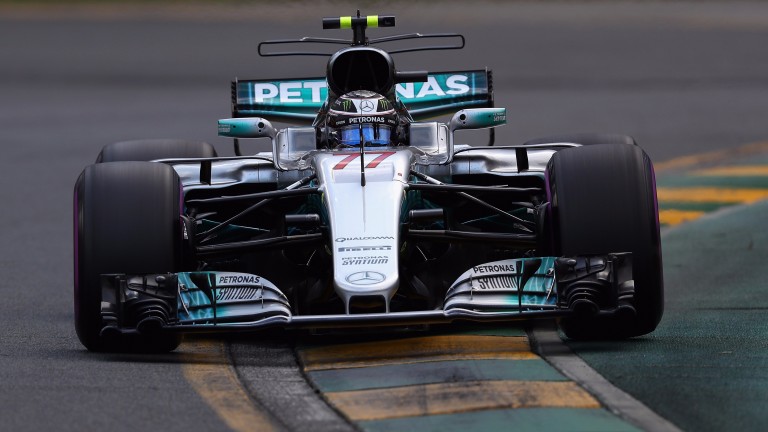 Valtteri Bottas is racing for Mercedes for the first time after leaving Williams
Clive Mason
1 of 1
By Phil Agius 1:49PM, MAR 25 2017

Saturday's first qualifying session of 2017 offered promise for the rest of the F1 season with a close battle for pole that saw Lewis Hamilton of Mercedes edge out Ferrari's Sebastian Vettel by 0.268 seconds.

With Merc new boy Valtteri Bottas just 0.025 seconds behind Vettel in third and Kimi Raikkonen fourth for Ferrari, the teams appear to be clearly the pick of the grid going into the opener in Melbourne.

Hamilton is 2-5 favourite, with Vettel 7-2, but the Briton looks short enough before we have had a proper look at the teams' respective long-run pace in race conditions.

A better approach for the opener may be to support the second Silver Arrow of Bottas, who is almost three times Vettel's price and written off by bookmakers as being vastly inferior to Hamilton at 10-1.

Despite not getting a perfect lap in on either of his qualifying runs, Bottas was closer to Hamilton than world champion Nico Rosberg managed in the last four seasons at Albert Park.

Hamilton beat the German by at least 0.360 seconds every year from 2013 to 2016 and his new Finnish teammate was only 0.293sec slower than the Briton.

Bottas has raced well for Williams in Australia, finishing fifth from tenth on the grid in 2014 and eighth after starting 16th last year following a grid penalty.

The drivers have much more ability to control their own destiny at the start this season with much of the launch control technology they have enjoyed being outlawed. Ferrari often began races much better than Mercedes last year but it should be more of a battle between the competitors in the cars than their respective computer experts this season.

For a second bet on the opener, back Haas driver Kevin Magnussen to come back from a poor qualifying session to finish in the points.

Magnussen qualified only 17th after running wide at Turn 12 on both his attempts in Q1. The Dane had never used the ultrasoft qualifying tyre in practice after missing much of P2 with technical trouble and without those mistakes he might have been much nearer teammate Romain Grosjean, who qualified in an impressive sixth.

Magnussen, who was second in Australia for McLaren in 2014, had been tenth (Grosjean eighth) in third practice, so he should have the pace to work through the field, as well as benefiting from any first-weekend attrition.

Grosjean's efforts in the Ferrari-powered Haas was further evidence that the Italian engines are right up there with Mercedes this year, although the mechanical grip of the Mercs could give Hamilton and Bottas the edge over Vettel at the front.

Red Bull's Daniel Ricciardo starts in tenth after a crash which halted Q3, while his teammate Max Verstappen is a 33-1 chance from fifth on the grid.

Antonio Giovianzzi is making his F1 debut for Sauber after Pascal Wehrlein was ruled out with a back injury.