Boro may have no issues reading Royals 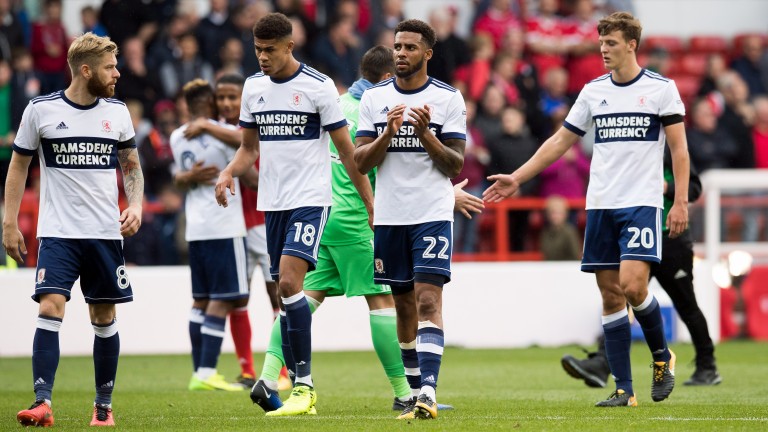 Middlesbrough clap the fans at the end of the Forest game
Mark Robinson
1 of 1
By Dan Childs UPDATED 8:48PM, OCT 27 2017

Reading v Middlesbrough
Expectations have not been met by Middlesbrough in the opening 13 games of the Sky Bet Championship season but the Teessiders are only five points adrift of the playoffs and can edge closer to the top six by beating Reading.

Before the season Middlesbrough chairman Steve Gibson announced his club's intention to "smash the division".

Gibson was entitled to feel confident after spending plenty of money in the transfer window but Boro are having a stop-start campaign and slipped to 13th after a 1-0 loss at home to Cardiff last Saturday.

In recent weeks they have been doing better on the road and they head to Berkshire looking to extend a four-match unbeaten sequence on their league travels.

Britt Assombalonga, their top scorer with six goals, is set to return to the side after sitting out Tuesday's 3-1 loss at Bournemouth in the League Cup fourth round and will be ably assisted by Danish attacker Martin Braithwaite, who has scored in two of his last three starts.

Boro look much more of a threat than they did in the Premier League last season and should have the attacking advantage over Reading.

Last season Yann Kermorgant's 18 league goals played a huge part in taking the Royals to the playoff final. Kermorgant is back in training after hip and groin surgery but hasn't featured this season and Reading are struggling in 20th, two points above the drop zone.

Plymouth v Rochdale
Sky Bet League One basement boys Plymouth are unbeaten in three games and can continue their mini-revival with a victory over Rochdale at Home Park.

Adjusting to a higher level was always going to be a challenge for Plymouth but they haven't been helped by injuries and suspensions.

However, key players in centre-back Sonny Bradley and creative midfielder Graham Carey have returned to the side and recent signing Toumani Diagouraga has made a difference in midfield.

They looked solid during last Saturday's 1-0 win at Wimbledon and Carey provided the decisive, producing a defence-splitting pass for goalscorer Joel Grant.

Rochdale were also winners last weekend, recording a 1-0 success at home to Bristol Rovers. But Keith Hill's side were not entirely convincing and they are still searching for their first away league win after seven attempts. The long trip to Devon may not bring them any relief.

Mansfield v Exeter
Exeter have dropped out of the automatic promotion places in Sky Bet League Two for the first time since August but can respond to back-to-back defeats with a victory over Mansfield at Field Mill.

However, the Grecians have been strong on their travels, collecting 14 points from a possible 21, and have no reason to be fearful of mid-table Mansfield, who are not living up to pre-season expectations.

Mansfield have dropped into the bottom half after failing to win any of their last four league fixtures and their poor run is set to be extended.

Port Vale have looked a much-improved team under new manager Neil Aspin – winning three games in succession – but their revival could grind to a halt against promotion-chasing Swindon.

Aspin has clearly had a major impact on the Vale players and is getting a fantastic reaction from striker Tom Pope, who has netted six goals in the last four games.

But another key player in the revival – on-loan Bournemouth midfielder Ben Whitfield – has been ruled out for a spell after suffering an ankle injury in the second half of last Saturday's 1-0 triumph at Exeter.

Whitfield's quality will be missed and any drop-off in Vale's performance will leave them vulnerable against a Swindon side geared up to push for promotion.

Robins manager David Flitcroft knows how to get out of the fourth tier as he did it with Bury in 2014-15 and he has been given the funds to put together a strong squad.

Swindon climbed into the playoffs with last Saturday's 1-0 triumph at home to Wycombe (their sixth win in ten) and their ascent can continue in the Potteries.