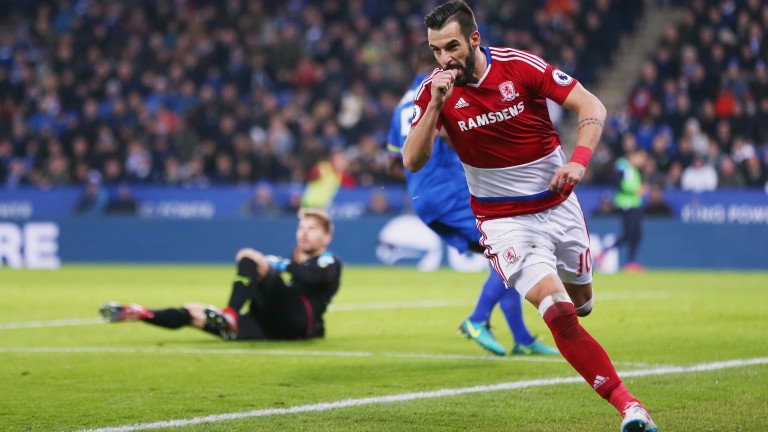 One point separates fifth-bottom Middlesbrough from second-bottom Hull but there could be a wide gap in class at the Riverside Stadium where hosts Boro are value 5-6 favourites to prevail.

Hull got off to a surprisingly bright start to the season despite failing to strengthen their squad until the closing days of the transfer window.

But after picking up six points in the first two games, they accumulated just five from the next 11.

The realisation that they face a long, hard season has dawned and the markets take a dim view of their survival hopes – Hull are 4-11 to be relegated and 2-1 to finish bottom.

But while a cup run may be good for morale it may end up hindering their survival hopes because Hull’s semi-final matches against Manchester United are likely to divert attention from some vital league fixtures in January.

Middlesbrough know all about the potential pitfalls of lengthy cup runs after famously reaching the League Cup and FA Cup finals in 1997 and getting relegated in the same season.

All of their focus is on cementing their hard-won Premier League status and they have probably performed better than their 12 points indicate.

Not scoring enough goals has been their main problem and the chief culprit has been high-profile summer signing Alvaro Negredo, who was snapped up on a season-long loan from Valencia but has taken a long time to show his quality.

However, the 21-cap Spanish international scored both goals in a 2-2 draw at Leicester in their last match and is the 4-1 favourite to notch the opening goal against Hull.

Boro were frustrated to take only a point at Leicester after playing the better football for long periods, but the performance offered further evidence that Aitor Karanka’s men are improving.

In the four matches preceding Leicester, Boro drew 0-0 at Arsenal, won 2-0 at home to Bournemouth, drew 1-1 at Manchester City and lost 1-0 at home to Chelsea.

They have shown they can compete against the league’s best but it is crucial to their survival hopes that they show a more ruthless approach when facing the teams around them.

Hull make the trip north with just one fully-fit striker in Adama Diomande, and their gameplan will be to frustrate for as long as possible and hope to profit from a set-piece or a bit of magic from Robert Snodgrass.

However, their cautious approach has not been successful over their last four away league games, which have produced four defeats by an aggregate scoreline of 15-2.

They were brushed aside 3-0 at fellow strugglers Sunderland on their last road trip and a similar story may be about to unfold on Teesside.

Team news
Middlesbrough
George Friend (knee) is sidelined but no further injuries are reported. Daniel Ayala (ankle) should return to the squad.

Hull
Ryan Mason is available after illness and Sam Clucas returns after
suspension. Dieumerci Mbokani starts a three-game ban and Abel Hernandez (groin) and Shaun Maloney (back) are doubts.