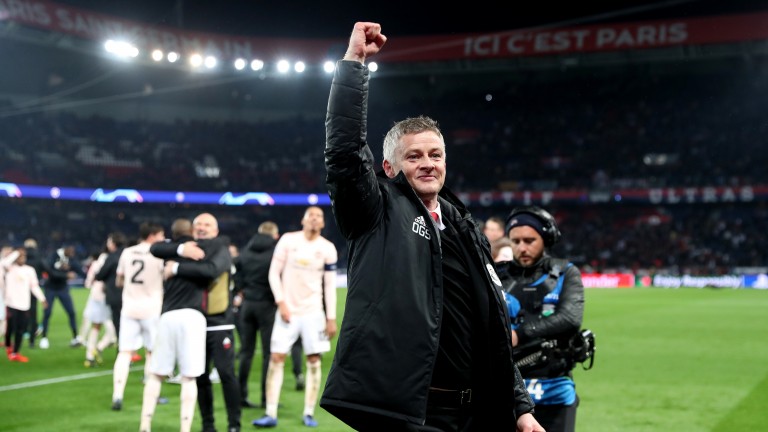 Ole Gunnar Solskjaer will soon be announced as Manchester United's permanent manager after a remarkable run of success.

That's the view of bookmakers at least, with Hills joining Paddy Power in paying out on Solskjaer getting the job, while most layers have suspended their markets and the Red Devils cult hero is only 1-18 to start next season at Old Trafford.

Wednesday's incredible 3-1 win away to Paris St-Germain, sealed with an injury-time penalty from Marcus Rashford, saw United reach the Champions League quarter-finals under the guidance of Solskjaer, who has also led the club to the last eight of the FA Cup and back into contention for a top-four finish.

United are 11-1 from 125-1 to win the Champions League and their recovery from a 2-0 first-leg deficit delighted those who took juicy prices about Solskjaer's side pulling off the Paris miracle.

Bet365 had been as large as 20-1 for United to reach the last eight and spokesman Steve Freeth said: "It was not as bad as when Barca landed a comeback against PSG in 2017 at the same price but it was still a good night for punters.

Malachy Rooney of Paddy Power added: "It was absolutely horrendous - United going through in that fashion was awful and we have a huge liability on them in the outright market."

An English winner of the Champions League is a 5-4 shot with Betfair and there could well be four Premier League sides in next week's quarter-final draw with United and Tottenham already through.

Manchester City hold a 3-2 advantage over Schalke, while Liverpool head to Munich level at 0-0 with Bayern.

Roma have sacked manager Eusebio Di Francesco following their exit at the hands of Porto after extra-time on Wednesday.