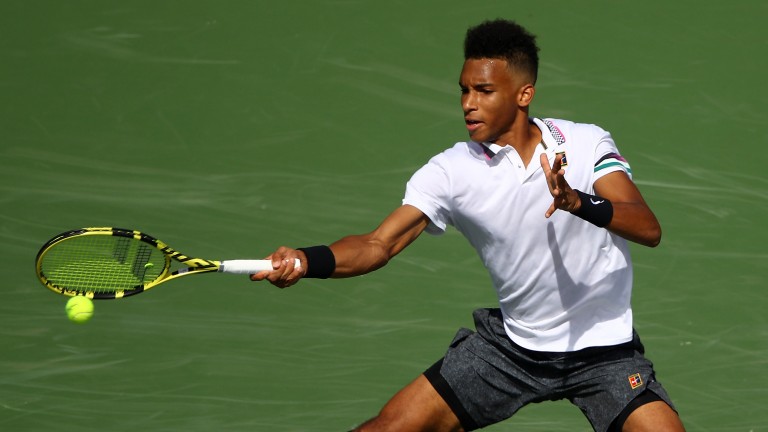 Felix Auger-Aliassime is playing for fun and the hugely talented Canadian youngster could have too much for Yoshihito Nishioka in their BNP Paribas Open third-round clash in Indian Wells.

A trip to the clay-court Golden Swing has afforded a huge boost to players such as Auger-Aliassime and Laslo Djere, and both have continued on the desert hard courts where they left off on the slow red terrain.

Auger-Aliassime struggled with fitness and stamina issues in his some of his early professional outings, but he has worked on those parts of his game and is an exciting force to be reckoned with.

Nishioka has greater experience but fewer weapons than the selection and that could cost the Japanese journeyman.

Marcos Giron, an American qualifier who has ousted Jeremy Chardy and Alex de Minaur in the main draw, is not without a chance of continuing the upsets against Milos Raonic. But it's difficult to assess the 25-year-old Californian's relative strengths given that he is meeting many of these top-level opponents for the first time in his career.

In the women’s singles, Ysaline Bonaventure is making strides this year and the French qualifier could cause more problems for Karolina Pliskova than the oddsmakers anticipate.

Bonaventure has seen off talented pair Taylor Townsend and Donna Vekic, both in three sets, in the main draw and a reproduction of that level of application could see her trouble fifth seed Pliskova, who fought back from the loss the opening set to defeat Misaki Doi in the Czech’s event opener.

Pliskova is more than capable of hammering opponents on her day, but she has been going through the motions a little this year and may have to dig deep if Bonaventure produces anything approaching her A-game.