Blues hotshot has the midas touch 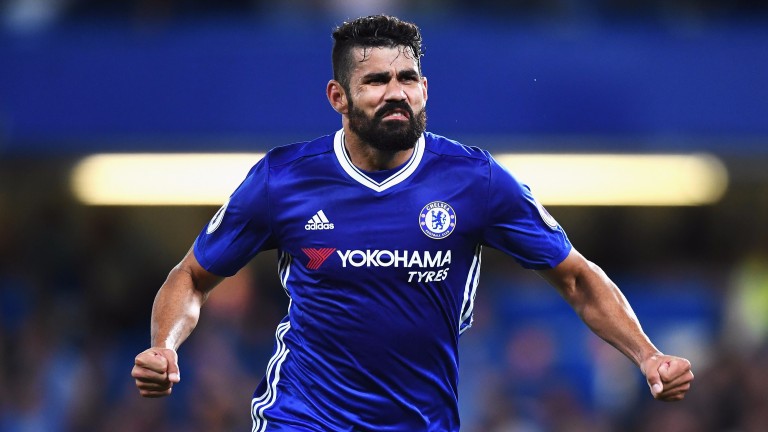 The battle for the Premier League Golden Boot looks a lot more competitive than the title race but Chelsea’s Diego Costa is capable of bursting out of the pack to finish top of the English scoring charts for the first time in his career.

Costa has been at the forefront of Chelsea’s push to regain the title and seems totally focused on the task ahead despite widespread reports of a move to China during the January window.

His 15 goals in 22 appearances place him one goal behind pace-setter Romelu Lukaku, who hit the front after his four-goal salvo helped Everton to a 6-3 victory at home to Bournemouth on Saturday.

Lukaku – mentioned last summer as a potential replacement for Costa – has shortened from 20-1 to 4-1 since ripping part the Cherries’ defence.

But he often fails to shine against the top teams and Everton have a tough run-in which includes away games at Tottenham, Liverpool, Manchester United and Arsenal.

Harry Kane – the 2015-16 Golden Boot winner – is just two goals behind Lukaku despite his season being disrupted by an ankle injury which forced him to miss six weeks of the campaign.

The Tottenham striker has 12 goals in 14 games since his return to the side and has the best goals-per-minute ratio of the contenders at one every 116 minutes.

However, Kane has still got to overtake some top-quality players and looks short enough as the 10-3 market leader.

Zlatan Ibrahimovic and Costa are 7-2 shots but the Chelsea man looks by far the better bet.

The Blues have been focused on results rather than performances in the majority of games but, as they close in on what appears to be an inevitable title triumph, they are likely to play with more freedom.

Some real hidings could be handed out by Chelsea over the remaining months of the season and Costa, without the distraction of European football, can fill his boots in the home fixtures against Swansea, Watford, Crystal Palace, Southampton, Middlesbrough and Sunderland.

Manchester United’s run-in looks trickier, making it more difficult for Ibrahimovic to finish with a flurry of goals.

The Red Devils still have to play all of the top four and three of those games are away from home.

Alexis Sanchez has been the key man in Arsenal’s title challenge with 15 goals in 24 appearances but has netted just three times since Christmas and looked out of sorts as the Gunners crashed to a dismal 3-1 defeat at Chelsea on Saturday.

The Chilean has never scored more than 19 league goals in a single season and would almost certainly have to reach a much higher figure to come out on top in such a competitive heat.

Defoe is one of the most natural goalscorers in the league but Sunderland are likely to be focused more on the defence as they scrap for survival and that could mean a lack of opportunities for their talisman.

Lukaku’s weekend heroics have shown how quickly the picture can change and if any striker is to come from way off the pace it could be Sergio Aguero.

However, for the Argentinian to have any chance of repeating his 2014-15 Golden Boot success he will have to dislodge Gabriel Jesus from the Manchester City starting line up.

Given a consistent run in the side, Aguero would be a threat , but he looks short enough at 10-1.