Blades should put Reading to the sword

Best bets of the day 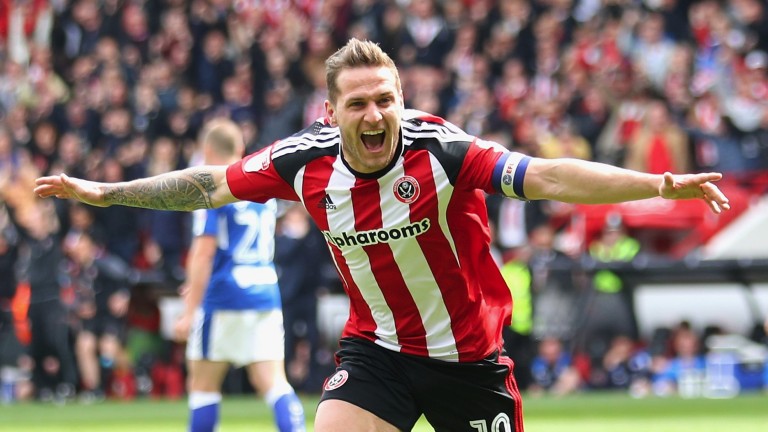 Sheffield Utd v Reading
Life in the Sky Bet Championship has been a stroll for Sheffield United and they can continue to make light of their step up in division by beating Reading at Bramall Lane.

United did not look like ordinary champions in League One last season - accumulating 100 points along the way - and this sleeping giant has been woken up in spectacular fashion by manager Chris Wilder after a miserable time in England's third tier.

It probably helps that Wilder is one of their own, a lifetime supporter who has got the whole club pulling in the same direction, and seven wins in the last nine league games is pretty impressive.

Last week's 1-0 success over Ipswich made it five victories in six at home and there were excuses for their 1-0 reverse to Norwich which spoils the perfect Bramall Lane record as Wilder was battling an injury crisis which robbed him of nearly all of his forwards.

Billy Sharp and Leon Clarke have since returned to lead the line and there is something special to come off the bench in the form of youngster David Brooks, who gave the club a boost this week by signing a new four-year deal with the Blades.

Reading were a penalty shootout away from playing in the Premier League but they were always punching above their weight in last season's unlikely promotion tilt.

On just about every key performance indicator, particularly shots and expected goals, they were nearer to relegation than promotion so it should be no surprise to see them fall back this season.

Jaap Stam's men returned to winning ways by beating Leeds last week but the Royals still had a poor September with losses to Bristol City, Norwich and Millwall and odds-against quotes about United look decent.

Carlisle v Notts County
Kevin Nolan was unhappy with the performance of his side in Tuesday's poor 2-0 loss at Crewe but they can bounce back at Carlisle.

Nolan has been known to rotate his team for midweek matches and maybe went too far at Gresty Road with Jon Stead, Shola Ameobi, Joel Grant and former Carlisle defender Shaun Brisley among those rested.

Stead, Ameobi and Grant were sent on as subs to no avail but it was only County's third defeat of the season and they are worth backing as underdogs at Brunton Park.

Carlisle's results have been better than their performances in recent weeks.

They won 1-0 at Crawley despite having only two shots and the same score at Colchester having had three shots, while Keith Curle's men grabbed three goals against Wycombe with three shots on target.

Morecambe v Grimsby
Is this the season Jim Bentley's miracle-working at Morecambe comes to an end?

Year after year Bentley has managed to overcome a tiny budget to keep the club competitive in League Two but only Forest Green, Chesterfield and Port Vale have fewer points than Morecambe.

The continued suspension of Kevin Ellison is causing them problems - Morecambe's record this season without the wily veteran reads played eight, won one and lost six.

Grimsby made a shocking start but have lost only two of ten league games since the start of September and this is a decent chance to continue that run.

Banker
Luton 13-17
The Hatters have been sensational in recent weeks, scoring 13 goals in their last three matches, and should have way too much firepower for Crawley.

Blowout
AFC Wimbledon 4-5
On expected goals Wimbledon are rated as one of the unluckiest sides in League One so they deserve respect but odds-on quotes against Plymouth certainly factor in that bad fortune.

Jose Mourinho said earlier this week: "I feel sometimes defending properly is seen as a crime."

Defending properly is an important part of football but the very best teams are able to attack and defend and in the last two matches his Manchester United side have barely gone forward in ensuring that David de Gea has been well protected.

They produced one move of note at Anfield in the 0-0 draw and then scored from a crossed free kick on Wednesday when Benfica's young goalkeeper carried the ball over his line - otherwise it would have been another dull stalemate.

What I don't understand is why, when clubs have enormous resources and excellent attacking players, they would stifle them so much, even in the bigger matches.

It's not a crime to defend properly, but it is a sporting crime when money is virtually no object to choose to play more like Burnley than Barcelona.