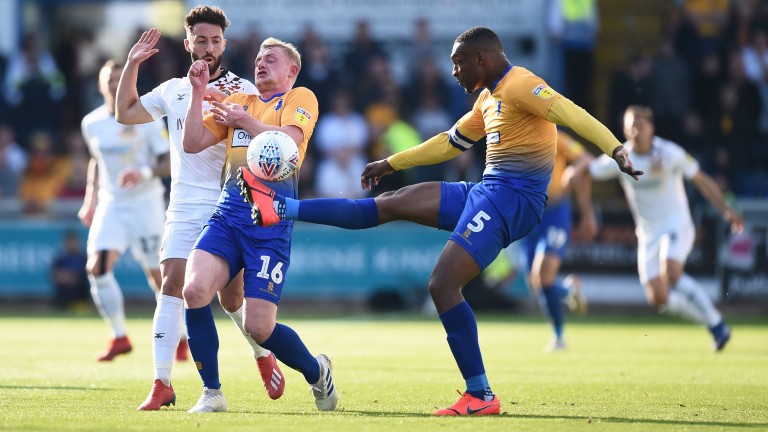 Mansfield Town are among the key contenders for the League Two title
Nathan Stirk
1 of 1
By Aaron Ashley UPDATED 12:17PM, SEP 6 2019

Notts County went into the 2018-19 season as Sky Bet League Two title favourites but the Magpies ended the campaign with feelings of sorrow rather than joy as their 131-year stay in the Football League came to an end following a shock relegation.

The Magpies focused far too much on strengthening in the final third and were punished for neglecting their defence, conceding 84 goals in 46 league games.

Rather than sweeping changes, experience and stability are two key components of success and Mansfield are surely edging closer to promotion.

This season’s title betting is dominated by relegated duo Bradford and Plymouth and EFL debutants Salford, who are co-owned by five members of Manchester United’s class of 92.

But it is the tried and tested which makes most appeal from a punting perspective and the Stags are taken to end their six-year stay in the fourth tier as champions.

Mansfield missed out on automatic promotion on the final day of last season, falling to a 1-0 defeat in an winner-takes-all clash at MK Dons. They were then beaten on penalties by Newport in the playoff semi-finals.

That playoff defeat called time on David Flitcroft's reign in the Mansfield dugout, with former Academy boss John Dempster the man entrusted with steering the Stags to success.

Dempster has plenty to prove in his first managerial role but he should know his players well having been involved with the previous regime and the new recruits he has brought in warrant plenty of praise.

Last season’s leading scorer Tyler Walker, who netted 25 goals in a season-long loan spell at Field Mill, has returned to parent club Nottingham Forest. But Dempster has moved quickly to counteract his departure by bringing in Andy Cook and Nicky Maynard.

The 28-year-old’s goalscoring heroics earned him a move to Walsall, where he grabbed 17 in 43 appearances, and a drop in grade should see him have another productive campaign.

Then there is veteran marksman Maynard. The 32-year-old scored 21 league goals in Bury’s promotion-winning campaign last term and his experience could be critical for the Stags.

Throw lightning-quick winger CJ Hamilton, who was widely-linked with a move to the Championship, into the mix, with strikes Craig Davies and Otis Khan in reserve, and Mansfield have some of the best attacking talents in the division.

That bodes particularly well given Mansfield boasted the division’s best defence last season having conceded only 41 goals in 46 games. They kept 18 clean sheets in 2018-19 and have the luxury of being able to field a settled backline again this term.

The calming presence of Krystian Pearce at the heart of their defence was instrumental to the development of promising youngsters Matt Preston and Ryan Sweeney, while the experienced Conrad Logan is one of the better keepers in the league.

Dempster has a well-balanced squad at both ends of the pitch and the Stags looks sure to figure prominently in the title shake-up.

An each-way wager with Sky Bet, who are offering four places at a fifth of the odds, and single on a top-three finish look two must-have bets for any League Two portfolio.

Bradford head the betting but they lost seven of their final ten games last season as they finished bottom of League One. It may take more than the addition of ageing strikers Clayton Donaldson (35) and James Vaughan (31) to revive their fortunes.

Plymouth have revamped their squad over the summer with Ryan Lowe, who guided Bury to League One last season, taking over the Pilgrims and bringing Danny Mayor, Callum McFadzean, Will Aimson, Byron Moore and Dom Telford along for the ride.

However, Plymouth have lost a number of key players too - Freddie Ladapo, Ruben Lameiras and Graham Carey have moved on - and big changes in a relatively short period of time could mean they struggle to hit top gear straight away.

Salford are a fascinating contender given their high-profile connections. The Ammies have been relatively sensible in the transfer market but the signing of classy midfielder Richie Towell from Brighton looks a brilliant piece of business.

However, the EFL is new territory for Salford, who have secured four promotions in five campaigns. They could finish only third in the National League last season and look short enough to win the title.