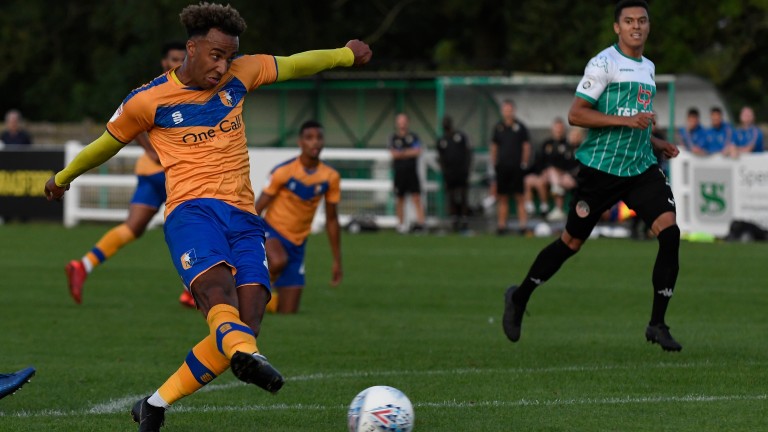 It can be dangerous to ignore the obvious, and the head of the Sky Bet League Two top goalscorer betting is littered by familiar names who have proven themselves at a higher level.

Bradford trio James Vaughan, Clayton Donaldson and Eoin Doyle, Salford's Adam Rooney and Mansfield pair Nicky Maynard and Andy Cook dominate the market. Each of them represent a side eyeing promotion, so it would be a surprise if one didn't scoop top prize.

Rooney, who scored 22 times in Salford's promotion-winning season and boasts European experience from his time with Aberdeen, is respected, but Mansfield may have found the key to success with Maynard and Cook leading the line.

Cook takes a dip in class having notched 13 times for Walsall in League One last season, but he isn't as mobile as teammate Maynard and may have to settle for a minor role.

Tyler Walker shone for the Stags last season, scoring 22 league goals, and the service provided through the likes of CJ Hamilton, Jacob Mellis and Alex MacDonald could see Maynard make mincemeat out of opposition defences.

The former West Ham and Cardiff striker netted 21 times for promoted Bury last season to finish third in the League Two Golden Boot race and averaged a goal every 180 minutes.

Maynard is a real livewire and should continue to make hay at this level.

Padraig Amond had a productive campaign last season, firing home 14 league goals to inspire Newport to a playoff final place, and the Irish forward could have another key role to play in County's latest promotion push.

Amond has demonstrated his goalscoring prowess and racked up 59 appearances in all competitions last term, so has no problem taking on the challenge of an energy-sapping campaign.

The striker from Carlow, who turned 31 in April, also scored in five of Newport's seven FA Cup clashes, showing his class with goals in glamour ties against Leicester, Middlesbrough and Manchester City.

Amond has built a good working relationship with Jamille Matt, the physical contributor to their partnership, and is also on penalty duty.

Ace attacker Amond finished seventh in League Two’s scoring charts last season but five of those who outperformed him are now operating at a higher level - Maynard is the only other contributor who remains in the fourth tier - and the Newport man holds strong claims of breaking into at least the each-way places.

At three-figure odds, punters could do worse than take a chance on Oldham's new recruit Scott Wilson.

The 26-year-old was Macclesfield’s leading marksman last season with ten goals in 33 league appearances, averaging one every 188 minutes.

That is a fine achievement given Macclesfield were embroiled in a relegation scrap and a move to Boundary Park, where he will be provided with considerably better service, could see him take another leap forward.