Birthday boy Rahm can give himself ace gift 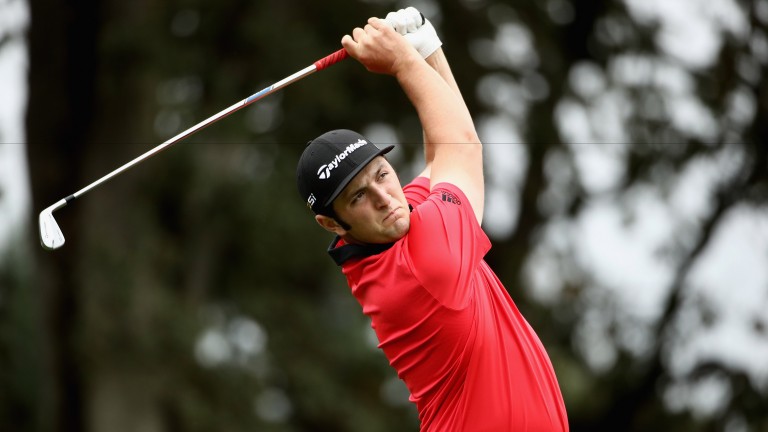 Palmer’s top tip
Jon Rahm 22-1
Just over 12 months ago the idea of humble Scot Russell Knox ever starting a US Tour event as favourite was fanciful, but that is the case for the OHL Classic at Mayakoba this week.

In the past year, Knox has won the WGC-HSBC Champions and the Travelers Championship, as well as finishing runner-up three times, one of which was at Mayakoba where he lost in a playoff to Graeme McDowell.

Knox is clearly well suited to this venue, which favours precision over power, but a disappointing final-round 74 last time out in his HSBC title defence was not ideal preparation and 16-1 is a price which fails to set the pulse racing.

A far more appealing option is Jon Rahm, who seems likely to enjoy the status of favouritism in many events in the decades to come. The Spaniard turns 22 on Thursday looking like the complete golfing package and the OHL seems a golden opportunity for a US Tour breakthrough.

It is not difficult to imagine Rahm winning this in the style of Harris English in 2013, harnessing natural power and overwhelming the El Camaleon track. Rahm hits it long and straight, and is confident on and around the greens.

This will be Rahm’s 15th US Tour start and, crucially, his first at a tournament in which he has competed twice before. His US Tour debut came as an amateur in the 2014 OHL and he missed the cut, then he returned last year, still in the unpaid ranks, to finish tenth, shooting four under-par rounds. That course comfort makes this rapid improver a massive threat to all.

Since turning pro, Rahm has finished third in the Quicken Loans National and second in the Canadian Open. His two outings of the new season have resulted in 15th-placed finishes and he appears to be peaking for Mayakoba.

Next best
Harris English 35-1
The 72-hole course record was set when English butchered Mayakoba three years ago, firing a second-round 62 en route to a 21-under-par total. It looked like the six-foot-three Georgian would go on to big things at that stage of his career, but frustration has followed for his fans.

English, who won on the Web.com Tour as an amateur, is 27 and still young enough to become a member of the elite. Four rounds of 67 for fourth place in last week’s Shriners Open bode well for the future. Only Jordan Spieth finished ahead of him at Colonial in May and an overdue third US Tour title could come at a happy hunting ground on Sunday.

Other selections
Billy Horschel 40-1
Si Woo Kim 40-1
Fabian Gomez 125-1
Wesley Bryan 100-1
Before Billy Horschel became a US Tour star and FedEx Cup champion, this little tournament helped progress his career. The first US Tour cut Horschel made was on his Mayakoba debut in 2011. He missed ten cuts prior, then three straight after, but managed 13th spot at El Camaleon – a course which plays to his strengths.

Horschel needs Mayakoba again because he has not won since the 2014 Tour Championship and is desperate to stop the rot before he turns 30 next month. The Floridian is eager to earn a spot in the Hyundai Tournament of Champions.

He opened with a 64 in the Shriners last week and was looking a title contender until finding a tough lie in a bunker at the par-five 13th in round two, where he took seven. Generally his game is in great shape and he is thrilled with his new PXG Gunboat putter.

Si Woo Kim, a brilliant winner of the Wyndham Championship in August, and superb in the final three legs of the FedEx Cup playoffs, was 17th on his Mayakoba debut last year, fading after a bright start. This rock-solid ball-striker should sustain his challenge this time with confidence levels much higher. He got tailed off on his HSBC debut last time out, but only 14 players in the elite field outscored the Korean starlet in round four.

The two US Tour victories of Fabian Gomez have come on courses demanding accuracy and the Argentinian has been dismissed too easily by the layers, while Wesley Bryan, who won three times on the Web.com Tour last season, including once in Mexico, is another outsider to support. Power are paying to six places.

Other Notables
Cameron Smith is an in-form and fast-improving 70-1 chance to strongly consider. Jim Furyk and Emiliano Grillo must be respected on suitable turf but are Mayakoba debutants.

When to bet By 1pm tomorrow

Where to watch Live on Sky Sports 4 from 6pm

Time difference Mexico is five hours behind the UK and Ireland

Course overview The Mayakoba US Tour gathering takes place on the stunning Greg Norman-designed El Camaleon. This tournament, which started in 2007, was previously staged in February, running alongside the Accenture Match Play, until getting its own fall date in 2013. One minute on this layout, the competitors are working their way through holes deep in tropical jungle and the next they emerge to oceanside holes where bare-chested spectators watch the action from the beach. El Camaleon is a quirky, fiddly track with limestone canals bisecting certain holes and there is even a cave which splits the first fairway into two sections. Sound course management is required, although scores in the low 60s have been recorded regularly by players with fairway-finding ability

Story of last year Russell Knox took a one-shot lead to the 72nd hole but made bogey, resulting in a three-way playoff with Graeme McDowell and Jason Bohn. McDowell triumphed with a brilliant tap-in birdie at the first extra hole

Type of player suited to challenge The Mayakoba honours board is filled with accurate drivers and it appears the only way to compete at El Camaleon is from the fairway. With peculiar troublespots waiting to punish the errant, precision operators like Fred Funk, Brian Gay, Mark Wilson, John Huh and Graeme McDowell have relished the challenge