Billy Horschel is ready to show his class in Kentucky

Floridian deserves to be favourite 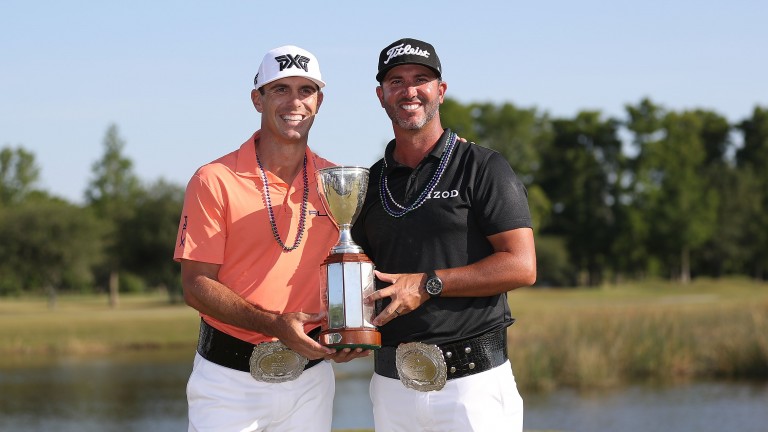 Almost all eyes will be on Carnoustie this week but the US golfers who are contesting the Barbasol Championship have a golden chance to pick up a title, a two-year PGA Tour exemption and a place in next month’s US PGA Championship.

Following three years at Alabama’s RTJ Trail Grand National Course, the event has moved to Keene Trace Golf Club in Kentucky – making it the first regular PGA Tour event to be played in the Bluegrass State since 1959.

Champion’s top tip
Billy Horschel 14-1
While most of golf’s elite are teeing it up in Scotland, Billy Horschel takes in the Barbasol but the 31-year-old has mixed it with the best in the past and could prove a class apart in Nicholasville.

The Floridian hit 14th in the rankings and picked up a $10m cheque for winning the 2014 FedEx Cup but has since slipped to 98th in the world despite recording victories in the 2017 Byron Nelson and April’s Zurich Classic alongside Scott Piercy.

He followed up with a reasonable display at the Players Championship and carded four rounds in the 60s in defence of the Byron Nelson but fell away with poor showings at the Memorial, the St Jude and the Travelers.

Horschel is a class act though, and he demonstrated his talents with an opening 64 at the Quicken Loans National on his last start before finishing 17th – a third-round 75 blunted his title challenge.

He has modest stats this season but, in this company, he ranks highly in greens hit in regulation, driving distance and accuracy while his all-around ranking is only bettered by fellow market leaders Chris Kirk and in-form Joel Dahmen.

Next best
Chad Campbell 40-1
Chad Campbell has not won since landing the 2007 Viking Classic but the Texan showed promise at Deere Run last week to finish seventh and there are reasons to side with him in a bid for that elusive victory.

The 2007 Viking, now the Sanderson Farms, represented the last of four PGA Tour wins for Campbell, who won big titles at Bay Hill and the Tour Championship when at his peak.

Campbell’s shorter hitting is a concern, but this layout is not too long for the 44-year-old who posted his joint-second best seasonal greens-in-regulation figure last week.

The Arthur Hills-designed course could well suit the Texan’s eye as the same architect planned the layout for Country Club Mirasol where the Honda Classic was staged from 2003 to 2006.

Campbell finished second in Palm Beach Gardens in 2003 and followed up that performance a year later with another top-ten finish.

Other selection
Mackenzie Hughes 40-1
Mackenzie Hughes missed eight consecutive cuts at the start of the season but the Canadian is coming back to form and will have his eye on a victory in Kentucky.

Hughes, already a PGA Tour winner after he beat Horschel and three others in a playoff for the 2016 RSM Classic, failed to better 40th in 2018 until a tie for 13th at the Greenbrier two weeks ago followed by another top-20 finish at the John Deere where he closed with a 65.

He showed considerable promise throughout his rookie campaign and is ready to start contending again.

Others to note
Chris Kirk
The other class act in the field alongside Horschel. This is a great chance for the 33-year-old but he is winless in three years.

Joel Dahmen
Has finished fifth and second in the last two weeks and is in fine form but is priced accordingly.

Brittany Lincicome
The LPGA pro becomes the first woman to compete in a regular PGA Tour strokeplay event since Michelle Wie in 2008 and will enjoy the media spotlight over the opening two days.

When to bet By midday on Thursday

Where to watch Live on Sky Sports from 10pm Thursday

Time difference Kentucky is five hours behind the UK and Ireland

Course overview The Champion Trace, designed by renowned course architect Arthur Hills, makes its PGA Tour debut. The Nicholasville track becomes the first regular US Tour event to be played in Kentucky since 1959.

The 7,328 yard par-72 layout features bentgrass greens and four gettable par fives. The eighth and ninth holes are guarded by water but players have a birdie chance after the turn at the short par four.

Trouble lurks at 12 and 13 but the par-five 14th is a great birdie opportunity.

Story of last year PGA Tour rookie Grayson Murray edged his way to a first victory at the Grand National Course by just one shot from Chad Collins. Murray shot a final-round 68 to hold on despite ten players finishing within four shots of the champion