Southend and Walsall deserve support too 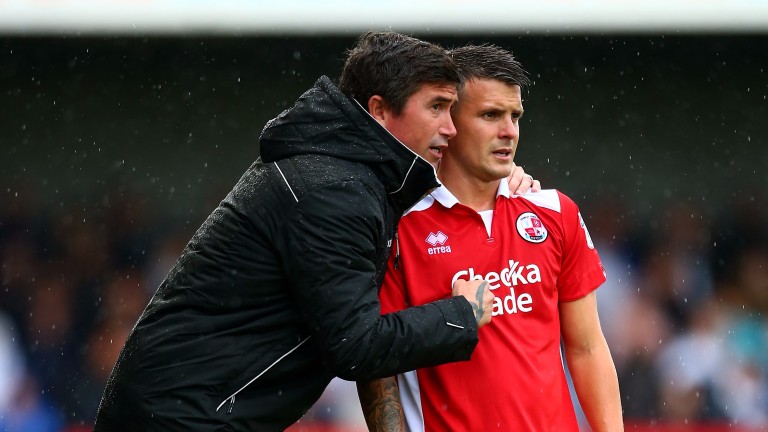 Swindon v Crawley
Swindon's quest to secure an immediate return to Sky Bet League One is off to a bright start, with two wins and a draw in League Two, and they can keep it going by beating basement boys Crawley at the County Ground.

It is too early to read much into the league table but leaders Swindon are where they would hope to be at the end of the season.

The Wiltshire side are one of the biggest fish in League Two and have a fresh look about them after appointing a new manager, David Flitcroft, and signing 12 new players (ten of them permanent) this summer.

They haven't battered anyone in their early games but have taken on two of last season's playoff participants and laid down early markers by winning 2-1 at Carlisle and coming from behind to draw 1-1 at home to Exeter.

Getting a first home win of the season is their next priority and they have a great chance against Crawley, who are struggling under their new manager Harry Kewell.

The Sussex side are the only team in League Two to have lost all three games and they slumped to a 5-1 defeat at Birmingham in the first round of the EFL Cup.

Crawley have been playing some decent football but haven't looked right at the back and there is a doubt over centre-back Mark Connolly, who was withdrawn after 31 minutes of last Saturday's 1-0 home defeat to Cambridge.

Swindon are without influential midfielder John Goddard, who suffered a setback on his return to training this week, but they still look solid odds-on shots.

Yeovil v Coventry
Coventry's strong start to life in League Two received a reality check last Saturday when they lost 1-0 at home to Newport but the Sky Blues can respond by beating lowly Yeovil at Huish Park.

Despite that shock defeat Coventry are fourth in the table and should remain confident of being a force in this division.

They have recruited well and one of the more recent arrivals, attacking midfielder Tony Andreu, is pushing for a start after coming off the bench and impressing in the last half an hour against Newport.

Coventry posted an impressive 2-0 win at Grimsby in their only road trip this season and should be successful against a Yeovil side heading for a relegation battle.

The Somerset side have shipped 14 goals in three league games and have by far the worst defensive record in the top four divisions.

They are pinning their hopes for a defensive improvement on 21-year-old centre-back Sid Nelson, who signed on loan from Millwall this week and will remain with the club until January.

Glovers manager Darren Way has described Nelson as a defender who likes to defend but there are doubts over a player who was not always a regular on loan at Newport last season.

Nelson joined County in early January and made 14 appearances, 12 of them starts, but he was substituted on four occasions and was left out of the starting line-up during the final eight games when the Exiles were desperately battling to stay up.

He may not be the answer to Yeovil's problems and any further defensive lapses could be seized upon by a Coventry side gearing up for a serious promotion push.

Gillingham v Southend
Adrian Pennock has presided over just four wins in 25 games since being appointed Gillingham manager in January and the pressure on him could increase with a home defeat to Southend.

The Gills are the only side in the Football League to have failed to score a league goal this season.

Connor Wilkinson was signed from Bolton to help fill the void but was sent off in a 1-0 defeat at Bradford and serves the second match of a three-game ban.

Gillingham are likely to be toothless in attack and Southend should take advantage.

The Shrimpers have had a mixed start, featuring the exhilarating high of a 2-1 success at home to Blackburn and the miserable low of a 5-0 defeat at Rotherham, but they are equipped to push for a top-half finish and should post their first away win of the season.

Walsall v Bradford
Walsall have steadied the ship with a 2-1 win at home to Oldham and a 1-1 draw at Portsmouth and are a value bet to get at least a draw when taking on Bradford.

Jon Whitney works on a tight budget at Walsall but his team's performance at Portsmouth, which merited at least a share of the spoils, offered hope for the rest of the season.

Walsall might do better than the ante-post markets anticipated (they were 11-4 to go down) while Bradford may struggle to match last season's fifth place.

The Bantams rely on target-man Charlie Wyke for goals but the striker is still working his way back from injury and is expected to start on the bench.