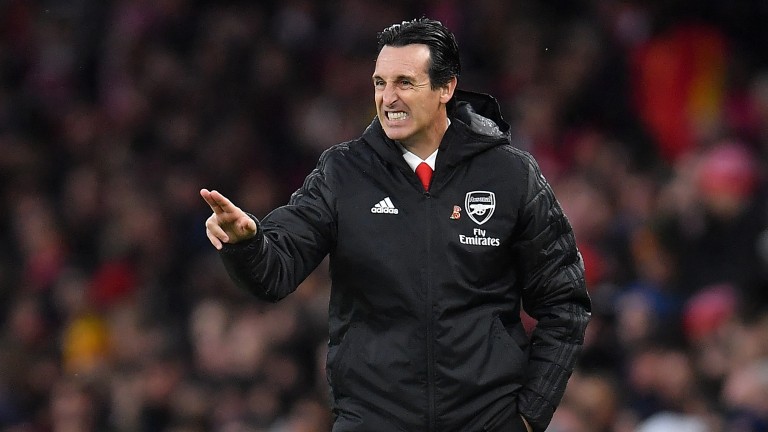 Unai Emery's Arsenal can get back to winning ways against Southampton in the Premier League
Justin Setterfield
1 of 1
By Dan Childs 4:22PM, NOV 22 2019

Arsenal
Granit Xhaka could be recalled but Sead Kolasinac (hamstring) is a doubt and Dani Ceballos (hamstring) misses out.

Southampton
Ryan Bertrand has completed a three-game ban and Pierre-Emile Hojbjerg and Cedric Soares have recovered from injuries.

Unai Emery and Ralph Hasenhuttl are among the most under-pressure managers in the Premier League but this weekend could bring relief for the Arsenal gaffer, who should steer his team to a comfortable victory.

The Gunners played well for two-thirds of their 2-0 defeat at Leicester and have not lost at the Emirates since April.

They need to put a run together to challenge the top four but can make a start against the Saints, who have picked up only one point in their last seven games.

Arsenal are unbeaten in their last 11 home games.

Wolves
Adama Traore (hamstring) is expected to be passed fit but Morgan Gibbs-White (back) is sidelined.

Eddie Howe was second favourite for the Tottenham job on Tuesday and his stock could rise further this weekend as Bournemouth look value to defeat Wolves.

The markets favour Wolves but both teams have 16 points and home advantage could be significant for the Cherries, who have lost just one of their last eight games at the Vitality Stadium.

Wolves have been on a good run but have won just three times on their Premier League travels this year and look poor value to make it four.

Wolves have won two of their last 13 Premier League away fixtures.

Brighton
Leandro Trossard and Adam Webster (both ankle) are available but Aaron Connolly (groin) is out and Lewis Dunk serves a one-match ban.

Leicester
James Maddison has shaken off a calf strain and Jonny Evans (stomach) is also available.

Leicester are second in the table on merit but their sequence of four Premier League victories could be broken by a draw.

The next few weeks will be fascinating for Leicester, whose next five matches are against bottom-half teams.

They could emerge as genuine title contenders but the clash against Brighton is a potential banana skin.

The Seagulls have been beaten just once in six home league games this season and that was a 2-0 loss to Southampton when they played with ten men for more than an hour.

Leicester have won on just one of their last six trips to Brighton.

Liverpool
Mo Salah and Andy Robertson (both ankle) are doubts and Joel Matip (knee) misses out. Xherdan Shaqiri (calf) is back in contention.

Liverpool could be missing a few key players this weekend but are well-versed at winning ugly and can do a job on Crystal Palace at Selhurst Park.

The Reds have had almost two weeks to bask in their 3-1 success over Manchester City but they know the title race is far from over and will be determined to keep pushing on.

Palace have caused problems for big clubs, including Liverpool, in recent seasons but they are the second-lowest scorers in the division and may struggle to unlock a solid Liverpool defence.

Crystal Palace have failed to score in three of their last four matches.

Everton
Fabian Delph (unspecified) and Bernard (knee) are injury doubts and Andre Gomes (ankle) and Jean-Philippe Gbamin (hamstring) are out.

Everton have been too inconsistent for Marco Silva's liking but they can achieve back-to-back league wins for the first time this season by defeating Norwich at Goodison.

Staying up looks a tall order for Norwich, who slipped to the foot of the table after losing 2-0 at home to fellow strugglers Watford.

Their defence - the second-worst in the division with 28 goals conceded – could be exposed by the improving Toffees, but striker Teemu Pukki is always a threat and could be key to them netting a consolation goal.

Everton have kept one clean sheet in their last ten league fixtures.

Watford moved off the foot of the table before the international break but it may be too soon to consider them solid favourites to beat Burnley at Vicarage Road.

Burnley have dug out draws at Wolves, Brighton and Aston Villa and are not without hope of adding to their points tally.

However, they will have to keep a close eye on Watford's star attacker Gerard Deulofeu, who is likely to kick on after scoring a superb individual goal in the 2-0 win at Norwich.

Burnley have not won any of their last eight league matches.